The Indian Institute of Management Calcutta (IIMC) was established as the first national institute for Post-Graduate studies and Research in Management by the Government of India in November 1961 in collaboration with Alfred P. Sloan School of Management (MIT), the Government of West Bengal, The Ford Foundation and Indian industry. During its initial years, several prominent faculty formed part of its nucleus, including Jagdish Sheth, J. K. Sengupta, among others.
Over the years, IIMC has grown into a mature institution with global reputation, imparting high quality management education. It has been playing a pioneering role in professionalising Indian management through its Post Graduate and Doctoral level programs, Executive Training Programs, Research and Consulting Activities.
Today, the institute serves as an autonomous body, continually evolving to meet its goals in an ever-changing business environment.
The vision of the Institute is to emerge as an International Centre of Excellence in all facets of Management Education, rooted in Indian ethos and societal values. Over the past four decades, IIM Calcutta has blossomed into one of Asia's finest Business Schools. Its strong ties to the business community make it an effective mechanism for the promotion of professional management practices in Indian organizations. Today, IIM Calcutta attracts the best talent in India - a melting pot of academia, industry and research. The best and brightest young men and women pursue its academic programs.
The residential experience is a foundation of the IIMC culture, which includes teamwork and the building of lifelong relationships. Students and partners live on or near campus, making social events and shared activities a way of life.
From our core curriculum of general management skills to advanced electives and seminars, our students have exceptional access to a preeminent faculty of thought leaders, all of whom teach in the MBA program.
To our students, we offer intellectual depth, abundant resources, and individual attention. To our alumni, we provide a lifelong connection to excellence. To the world, we have a commitment to ethical and responsible leadership.

To be an international centre of excellence in all aspects of management education.

The mission of the Institute is to develop innovative and ethical future leaders capable of managing change and transformation in a globally competitive environment and to advance the theory and practice of management.
Core Institutional Values :
We shall strive to develop and sustain the following values to provide the context for all our programmes and activities:
Excellence,
Academic Freedom,
Commitment,
Responsiveness to Societal Needs,
Creativity,
Openness,
Diversity with Synergy

The Indian Institute of Management Calcutta, the first institute in the IIM System, has entered the 50th year of its journey on November 14, 2010. It was the vision of Pandit Jawaharlal Nehru, the first Prime Minister of the country that led to the creation of institutions like the IITs and IIMs. Incidentally, November 14 is also the birthday of Pandit Nehru. What started as a small institution in late 1961 has today blossomed into one of the leading management schools in South Asia and the Asia-Pacific region. IIM Calcutta, being the first institution in the IIM System, November 14, 2010 also marks the Golden Jubilee of the IIM System. It is a very important landmark in the modern history of our country. With a definite plan we are celebrating the Golden Jubilee of the Institute and IIM System over a period of two years during November 14, 2010-November 14, 2012. 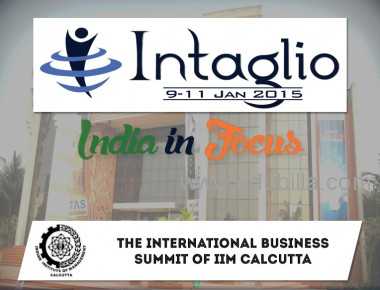 Intaglio is the largest business summit in Asia, with 20000 participants from more than 60 countries and 40 international B-Schools and over INR 2 million to be won as prize money. IIM Calcutta's B-School fest This year our theme is 'India In Focus', where we aspire to discover the best minds in business schools that will be able to take the helm..Read More..

Spread over three days, Carpe Diem is one of the most eagerly awaited festivals on the b-school calendar. It provides a platform for over 15,000 participants from some of the most prestigious institutes of India like the IITs, the IIMs, NITs, Delhi University, Calcutta University and other reputed B-schools and colleges across India. The students come..Read More..