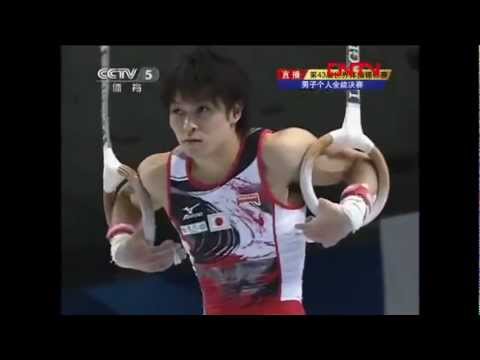 The Best Gymnast In The History Of Artistic Gymnastics 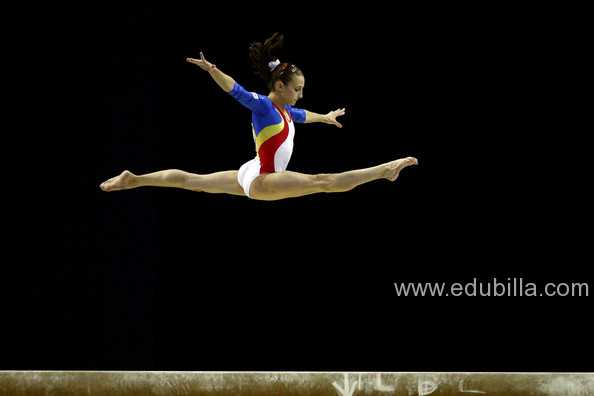 Artistic gymnastics is a discipline of gymnastics where gymnasts perform short routines (ranging from approximately 30 to 90 seconds) on different apparatus, with less time for vaulting (see lists below). The sport is governed by the Federation Internationale de Gymnastique (FIG), which designs the Code of Points and regulates all aspects of international elite competition. Within individual countries, gymnastics is regulated by national federations, such as BAGA in Great Britain and USA Gymnastics in the United States. Artistic gymnastics is a popular spectator sport at the Summer Olympic Games and in numerous other competitive environments.

Both male and female gymnasts are judged on all events for execution, degree of difficulty, and overall presentation skills.

A typical pommel horse exercise involves both single leg and double leg work. Single leg skills are generally found in the form of scissors, an element often done on the pommels. Double leg work however, is the main staple of this event. The gymnast swings both legs in a circular motion (clockwise or counterclockwise depending on preference) and performs such skills on all parts of the apparatus. To make the exercise more challenging, gymnasts will often include variations on a typical circling skill by turning (moores and spindles) or by straddling their legs (Flares). Routines end when the gymnast performs a dismount, either by swinging his body over the horse, or landing after a handstand.

Still rings is arguably the most physically demanding event. The rings are suspended on wire cable from a point 5.8 meters off the floor,and adjusted in height so the gymnast has room to hang freely and swing. He must perform a routine demonstrating balance, strength, power, and dynamic motion while preventing the rings themselves from swinging. At least one static strength move is required, but some gymnasts may include two or three. A routine must begin with an impressive mount and must conclude with an equally impressive dismount.

Men perform on two bars slightly further than a shoulder's width apart and usually 1.75m high while executing a series of swings, balances, and releases that require great strength and coordination.

A 2.4 cm thick steel bar raised 2.5 m above the landing area is all the gymnast has to hold onto as he performs giants (revolutions around the bar), release skills, twists, and changes of direction. By using all of the momentum from giants and then releasing at the proper point, enough height can be achieved for spectacular dismounts, such as a triple-back salto. Leather grips are usually used to help maintain a grip on the bar.

On the uneven bars (also known as asymmetric bars, UK), the gymnast navigates two horizontal bars set at different pre-set heights yet alterable widths. Gymnasts perform swinging, circling, transitional, and release moves — as well as moves that pass through the handstand. The most common way to mount these bars is by jumping towards the lower bar first.

Higher level gymnasts usually wear leather grips to ensure a grip is maintained on the bars while protecting hands from painful blisters and tears (known as rips). Gymnasts sometimes wet their grips with water from a spray bottle and then may apply chalk to their grips to prevent the hands from slipping. Chalk may also be applied to the hands and/or bar if grips are not worn.

The gymnast performs a choreographed routine from 70 to 90 seconds in length consisting of leaps, acrobatic skills, turns and dance elements on a padded spring beam. Apparatus norms set by the International Gymnastics Federation (used for Olympic and most elite competitions) specify the beam must be 125 cm (4') high, 500 cm (16') long, and 10 cm (3.9") wide.The event requires spectacular balance, flexibility and strength.

Two parallel rings 50cm apart, suspended from a cable and straps and held, one in each hand, for a series of exercises in men's artistic gymnastics particularly requiring stillness of the body; also called the "rings".

An apparatus in women's artistic gymnastics with a top bar 2.4m above the floor and a lower bar 1.6m high, used for a continuous series of grip changes, releases, new grasps and other complex moves.

An apparatus consisting of two wooden rails on uprights, adjustable in height and used for swinging, vaulting and balancing exercises in men's artistic gymnastics.

A solid apparatus 115 centimetres high with two handles, or pommels, on top that men in artistic gymnastics use for a series of manoeuvres defined by complex hand placements and body positions while holding themselves above the apparatus.

An imaginary surface where moves are performed, i.e. lateral, frontal, horizontal or diagonal.

An imaginary surface at less than a 90-degree angle to the floor, where moves are performed.

An imaginary surface, level with the ground, where moves are performed.

An imaginary surface to the side of, and parallel to, the body, where moves are performed.

A large, thick mat that sits on the floor at each end of the trampoline to cushion the impact if anyone falls from the apparatus.

A solid apparatus similar to the pommel horse, but lacking handles, and used in men's and women's artistic gymnastics for a variety of handsprings from a running approach.

The springboard used in the men's and women's vault.

The ancient Greeks believed gymnastics to be the perfect symmetry between mind and body. Modern gymnastics evolved at the end of the 19th century.

Plato, Aristotle and Homer heartily advocated the strengthening qualities of gymnastic activity. The Greeks believed symmetry between the mind and body was possible only when physical exercise was coupled with intellectual activity.

The term "artistic gymnastics" emerged in the early 1800s to distinguish free-flowing styles from techniques used in military training. Gymnastic competitions began to flourish in schools and athletic clubs across Europe and made a fitting return when the Olympic Games were revived in Athens in 1896.

Between 1896 and 1924 the sport evolved into what we recognise as modern gymnastics. Among those disciplines discarded were club swinging, rock lifting and even swimming, which appeared in 1922.

In the early days of artistic gymnastics at the Games, participants often had a background in ballet, and would reach their peak in their 20s. Nadia Comaneci’s and Nellie Kim's perfect scores of 10 at the 1976 Montreal Games, at the age of 14, heralded an era of younger champions, trained specifically in gymnastics from childhood, although gymnasts must now be 16 to compete in the Olympic Games.

Artistic gymnastics was introduced at the very first Olympic Games in 1896 in Athens, and has been present at every edition of the Games since then. At the beginning, it comprised disciplines that are difficult to qualify as “artistic”, such as climbing and acrobatics.

The foundations of the Olympic gymnastics programme were laid at the 1924 Games in Paris, when the men’s apparatus individual and team competitions appeared. In 1928, women were included in the Amsterdam Games. It was not until 1952 that the women’s programme was developed, with seven events, and then stabilised at six events as from the 1960 Games in Rome.

This discipline was mainly dominated by the Soviet Union from 1952 onwards, following the creation of the Russian Gymnastics Federation in 1883. At the 2008 Games in Beijing, it was the Republic of China’s turn to win the most gold medals.

The sport of gymnastics, which derives its name from the ancient Greek word for disciplinary exercises, combines physical skills such as body control, coordination, dexterity, gracefulness, and strength with tumbling and acrobatic skills, all performed in an artistic manner. Gymnastics is performed by both men and women at many levels, from local clubs and schools to colleges and universities, and in elite national and international competitions.

Gymnastics was introduced in early Greek civilization to facilitate bodily development through a series of exercises that included running, jumping, swimming, throwing, wrestling, and weight lifting. Many basic gymnastic events were practiced in some form before the introduction by the Greeks of gymnazein, literally, "to exercise naked." Physical fitness was a highly valued attribute in ancient Greece, and both men and women participated in vigorous gymnastic exercises. The Romans, after conquering Greece, developed the activities into a more formal sport, and they used the gymnasiums to physically prepare their legions for warfare. With the decline of Rome, however, interest in gymnastics dwindled, with tumbling remaining as a form of entertainment.

The Birth of Modern Gymnastics:

In 19th century Prussia, Friedrich Ludwig Jahn introduced horizontal and parallel bars, the vaulting horse and the balance beam. These innovations lead to the birth of modern gymnastics, activities that challenged the upper body and core with complex scapular patterns. In turn, these developments lead to the birth of large open-air gymnasiums. From here the methodology immigrated to the United States in the 1830s.

The Fédération Internationale de Gymnastique (FIG) or International Federation of Gymnastics (IFG) is the governing body of competitive gymnastics. Its headquarters is in Lausanne, Switzerland. It was founded on July 23, 1881 in Liège, Belgium, making it the worlds oldest existing international sport organisation.Originally called the European Federation of Gymnastics, it had three member countries – Belgium, France and the Netherlands – until 1921, when non-European countries were admitted, and it was renamed to its current name. 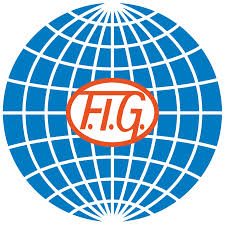 The idea to set up a Solidarity Foundation for gymnasts dates back to 1999-2000. At the time, FIG President Bruno Grandi was also chairing the Italian Federation, which had a similar system designed to help gymnasts who were reaching the end of their careers.

In Switzerland, the "Hans Schachenmann" Foundation was created in 1962 by a generous donor in favour of gymnasts who had been victims of illness or accidents. President Grandi and then-Secretary General Norbert Bueche used this model to draw up a similar project for the FIG. Their project was submitted to and approved by the FIG Executive Committee.

Aid is provided through equity capital interest only.

The Foundation mainly provides some aid to gymnasts who have been victims of accidents at gymnastics competitions or during training sessions. Unfortunately, serious accidents, such as falls resulting in paralysis, have occurred. Cases have been reported from all continents. To date, 15 gymnasts have been financially helped by the Foundation.

Several developing Federations have been supplied with apparatus or floors.

The Foundation Board is also in charge of scholarships allocated to promising young gymnasts in all Olympic disciplines and on all continents. The IOC’s annual subsidy is included in this management.

Coach of the Year Ntl Stream

Coach of the Year Int Stream

Judging Official of the Year

Levels: Gymnast of the Year

Levels: Coach of the Year

The Flo Hyman Memorial Award was conferred annually between 1987 and 2004 by the Women's Sports Foundation in Washington, D.C., United States, on the organization's National Girls and Women in Sports Day to the female sportsperson, irrespective of nationality or sport contested, adjudged to have capture[best]...the dignity, spirit, and commitment to excellence of American indoor volleyballer Flo Hyman, an advocate for gender equality in sport and for the passage of Civil Rights Restoration Act of 1988 who died suddenly and unexpectedly in January 1986.The award was given with respect both to athletic performance and to charitable activism, especially in the context of [increasing] sports opportunities for all girls and women. 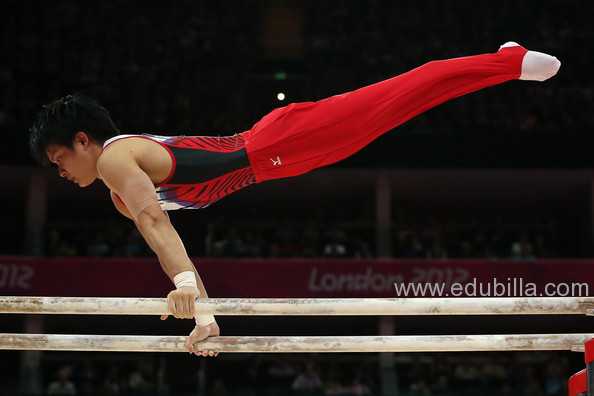 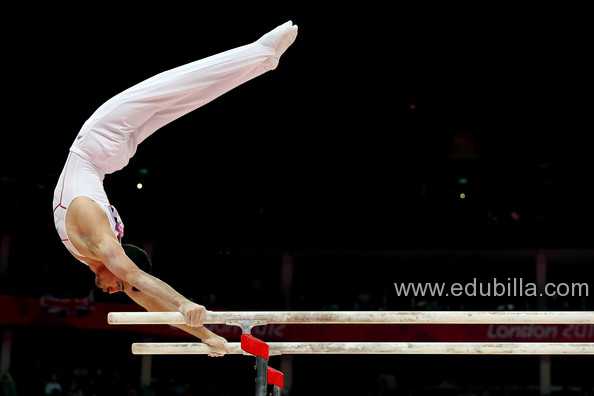 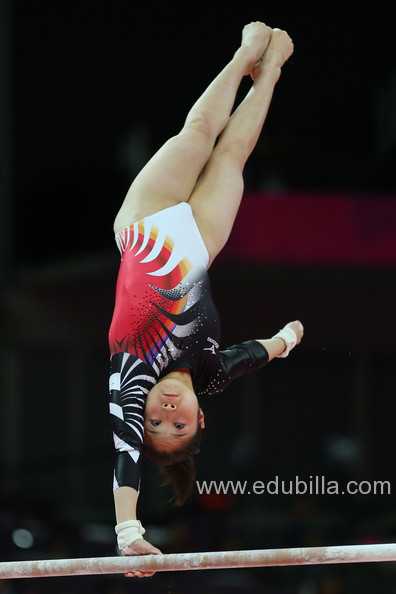 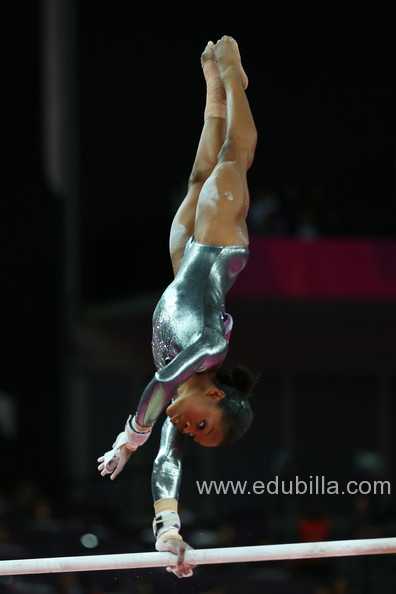 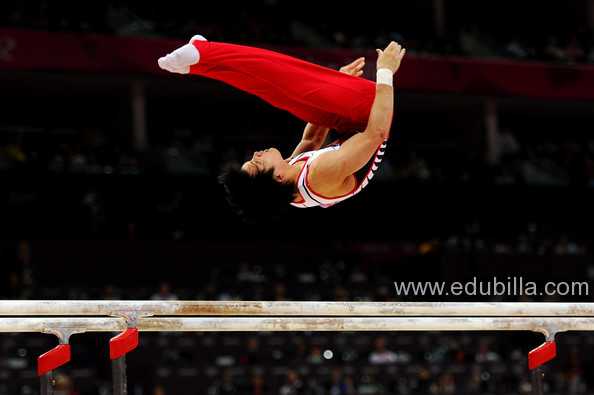 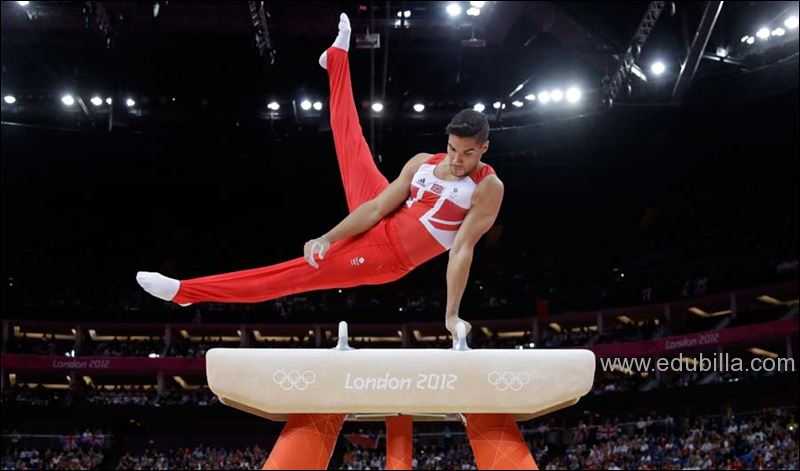 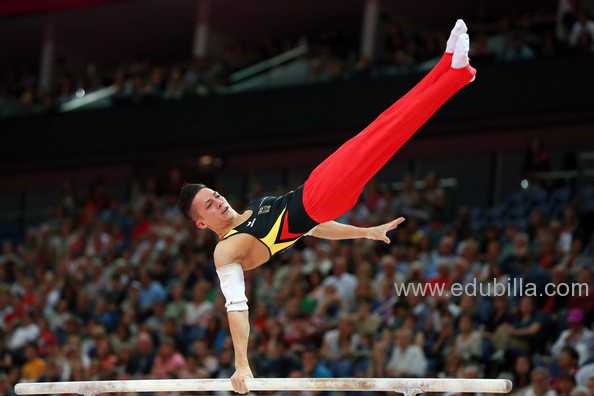 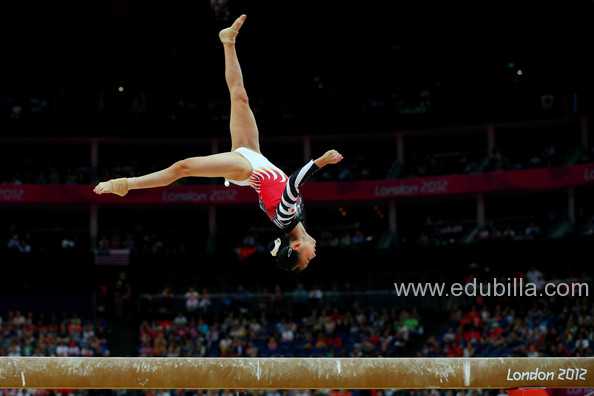 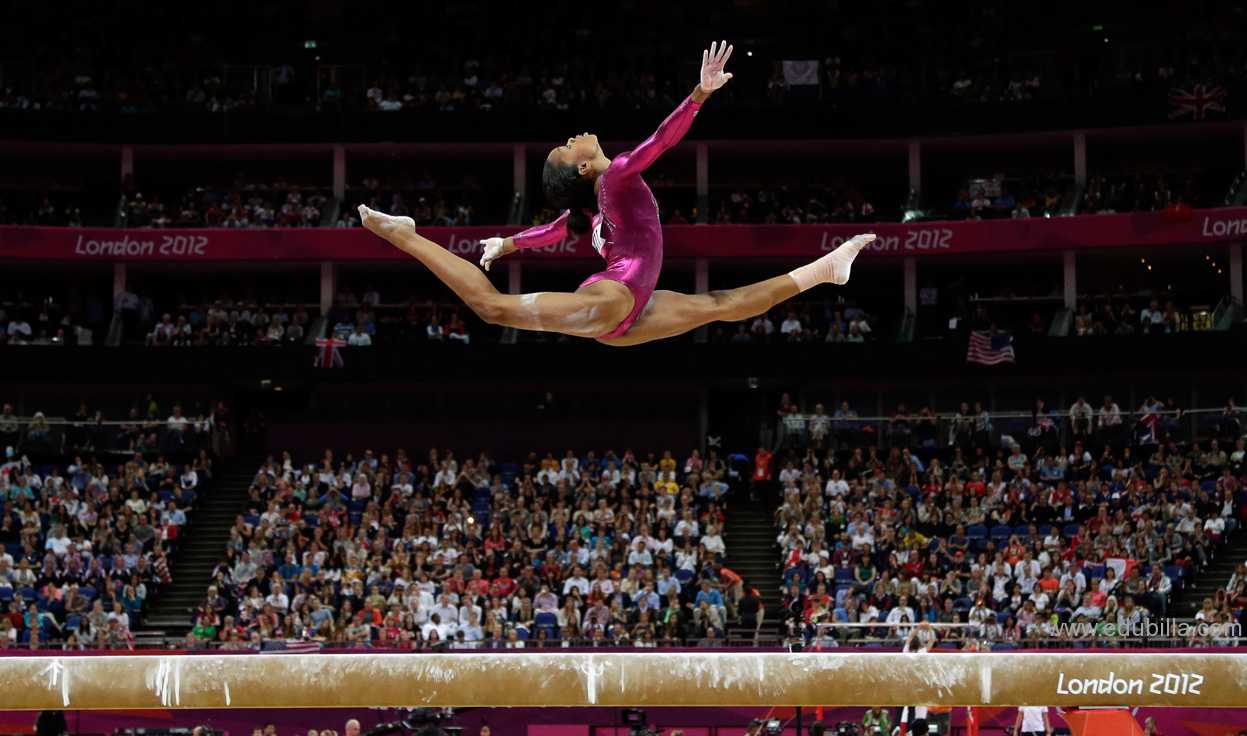 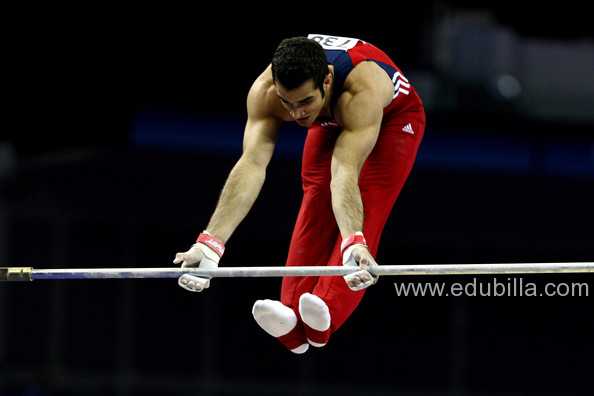 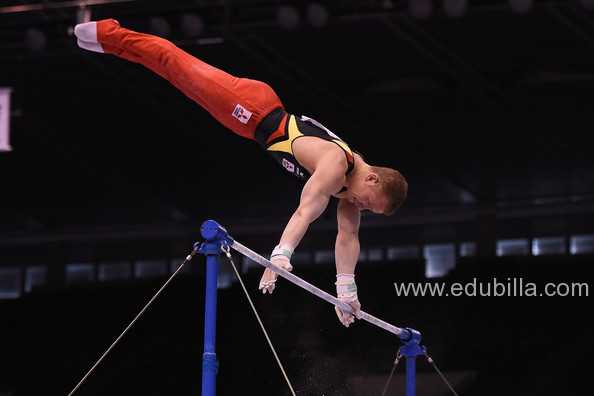 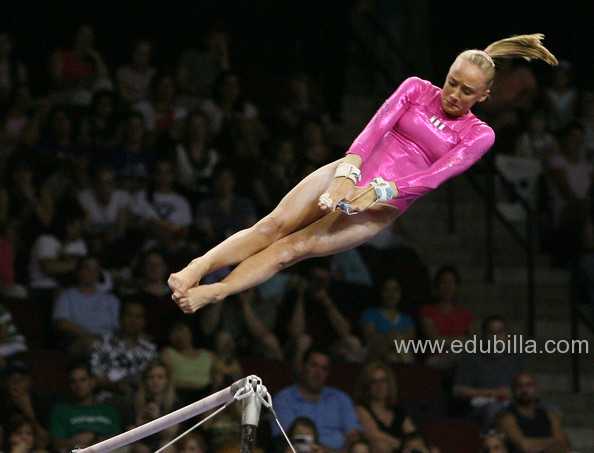