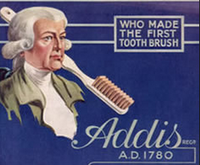 William Addis is widely credited as the inventor of toothbrush which can be said as the simplest invention but the very important in today’s era. Although different material was used in ancient past to serve the purpose of toothbrush, like chew sticks, tree twigs, bird feathers, animal bones and porcupine quills. Chinese used bamboos to clean their teeth’s but the creation of appropriate form and purpose of toothbrush is credited to William Addis.

He was born in 1734 in England. It is widely known that he became a rag trader, collecting rags and then pulping them to make high quality paper and earn money through solding them. Story of invention of toothbrush was somehow linked to his stay in prison in 1780 for causing a riot. In order to utilize his time during his stay in prison he thought of coming up with better and hygienic solution to clean teeth rather than cleaning with a piece of rag.

It is believed that he saved a piece of bone found in his prison meal, made half a dozen small holes in one end, and used broom standing in the corner of his cell to make bristles and used glue to stick the bristles in place.

After his release from prison he started a business that would manufacture the toothbrushes. It became a source of his earning and he became very rich. After his death his business was transferred to his son also called William, and it stayed in family ownership until 1996. By 1840 significance of toothbrushes spread across the world and they were being mass-produced in number of countries like England, France, Germany, and Japan.

William Edward Addis is considered as the inventor of toothbrush and it is the only invention which he made throughout his life. He was not at all a scientist or any famous inventor but his invention can be considered very important.