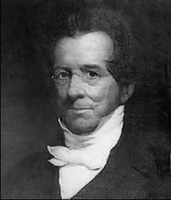 Thomas Hopkins Gallaudet, LL.D.,  was a renowned American pioneer in the education of the deaf. Along with Laurent Clerc and Mason Cogswell, he co-founded the first institution for the education of the deaf in North America, and he became its first principal. When opened on April 15, 1817, it was called the "Connecticut Asylum (at Hartford) for the Education and Instruction of Deaf and Dumb Persons," but it is now known as the American School for the Deaf.

In 1814, Thomas visited his family in Hartford, Connecticut. Looking out the window, he noticed that his younger brothers and sisters were not playing with another child. When he went out to investigate, he learned that this young woman, Alice Cogswell, was deaf. Not knowing sign language, Thomas attempted to communicate with Alice by pointing to his hat and writing H-A-T in the dirt. She understood him and he was inspired to teach her more. Her father, Mason Cogswell, a wealthy doctor, subsequently financed Thomas' trip to Europe since there were no schools for deaf children in the United States at that time.

Thomas first traveled to England, where he ran into roadblocks with the Braidwood family. This family operated many schools for deaf students in England that focused on the oral method of education, meaning students were expected to master lip reading and speech. They weren't too willing to share their methods with a young upstart from America, especially since Thomas wasn't able to pay the fees they requested. At the same time, he was not satisfied that the oral method produced desirable results. However, while in England he met Abbe Sicard, the director of the Institut Royal des Sourds-Muets in Paris, France, and two of his faculty members,Laurent Clerc and Jean Massieu, both highly educated graduates of the school. Thomas Hopkins Gallaudet accompanied them back to France to learn more from them there. However, before long he ran out of funds to support himself. Recognizing that he still wasn't ready to set up a school on his own, he called upon Clerc to accompany him back to America. On the way back, Clerc taught Thomas sign language and Thomas taught Clerc English, and together they established the American School for the Deaf in 1817. Laurent Clerc became the first deaf teacher of deaf students in the United States.

Gallaudet later married one of the graduates of the school, Sophia Fowler, and they had eight children. The youngest child was named Edward Miner Gallaudet. At the age of 20, Edward Miner Gallaudet journeyed to Washington, D.C., to run a school for deaf children there. Seven years later, in 1864, President Abraham Lincoln signed the charter to establish a national college for deaf students. Gallaudet University is named in honor of Edward's father, Thomas Hopkins Gallaudet. 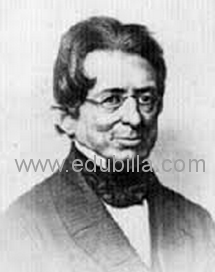 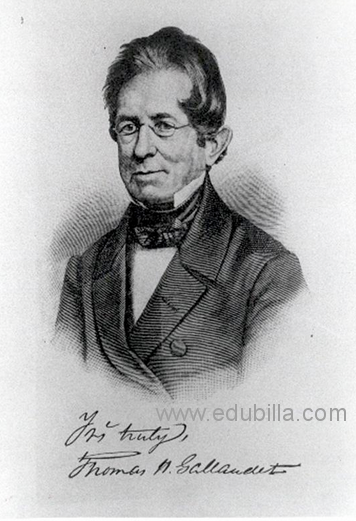