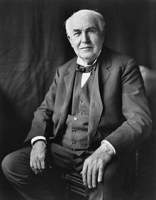 Thomas Edison was born in Milan, Ohio, and grew up in Port Huron, Michigan. He was the seventh and last child of Samuel Ogden Edison, Jr. (1804–1896, born in Marshalltown, Nova Scotia, Canada) and Nancy Matthews Elliott (1810–1871, born in Chenango County, New York). His father had to escape from Canada because he took part in the unsuccessful Mackenzie Rebellion of 1837. Edison reported being of Dutch ancestry.

In school, the young Edison's mind often wandered, and his teacher, the Reverend Engle, was overheard calling him "addled". This ended Edison's three months of official schooling. Edison recalled later, "My mother was the making of me. She was so true, so sure of me; and I felt I had something to live for, someone I must not disappoint." His mother taught him at home. Much of his education came from reading R.G. Parker's School of Natural Philosophy and The Cooper Union.

Edison developed hearing problems at an early age. The cause of his deafness has been attributed to a bout of scarlet fever during childhood and recurring untreated middle-ear infections. Around the middle of his career, Edison attributed the hearing impairment to being struck on the ears by a train conductor when his chemical laboratory in a boxcar caught fire and he was thrown off the train in Smiths Creek, Michigan, along with his apparatus and chemicals. In his later years, he modified the story to say the injury occurred when the conductor, in helping him onto a moving train, lifted him by the ears.

Edison's family moved to Port Huron, Michigan, after the railroad bypassed Milan in 1854 and business declined; his life there was bittersweet. Edison sold candy and newspapers on trains running from Port Huron to Detroit, and sold vegetables to supplement his income. He also studied qualitative analysis, and conducted chemical experiments on the train until an accident prohibited further work of the kind.

Edison obtained the exclusive right to sell newspapers on the road, and, with the aid of four assistants, he set in type and printed the Grand Trunk Herald, which he sold with his other papers. This began Edison's long streak of entrepreneurial ventures, as he discovered his talents as a businessman. These talents eventually led him to found 14 companies, including General Electric, which is still one of the largest publicly traded companies in the world.

Edison became a telegraph operator after he saved three-year-old Jimmie MacKenzie from being struck by a runaway train. Jimmie's father, station agent J.U. MacKenzie of Mount Clemens, Michigan, was so grateful that he trained Edison as a telegraph operator. Edison's first telegraphy job away from Port Huron was at Stratford Junction, Ontario, on the Grand Trunk Railway.

Edison did not invent the first electric light bulb, but instead invented the first commercially practical incandescent light. Many earlier inventors had previously devised incandescent lamps, including Alessandro Volta's demonstration of a glowing wire in 1800 and inventions by Henry Woodward and Mathew Evans. Others who developed early and commercially impractical incandescent electric lamps included Humphry Davy, James Bowman Lindsay, Moses G. Farmer, William E. Sawyer, Joseph Swan and Heinrich Göbel. Some of these early bulbs had such flaws as an extremely short life, high expense to produce, and high electric current drawn, making them difficult to apply on a large scale commercially.

In 1878, Edison formed the Edison Electric Light Company in New York City with several financiers, including J. P. Morgan and the members of the Vanderbilt family. Edison made the first public demonstration of his incandescent light bulb on December 31, 1879, in Menlo Park. It was during this time that he said: "We will make electricity so cheap that only the rich will burn candles.

The President of the Third French Republic, Jules Grévy, on the recommendation of his Minister of Foreign Affairs Jules Barthélemy-Saint-Hilaire and with the presentations of the Minister of Posts and Telegraphs Louis Cochery, designated Edison with the distinction of an 'Officer of the Legion of Honour' (Légion d'honneur) by decree on November 10, 1881; He also named a Chevalier in 1879, and a Commander in 1889.

In 1887, Edison won the Matteucci Medal. In 1890, he was elected a member of the Royal Swedish Academy of Sciences.

The Philadelphia City Council named Edison the recipient of the John Scott Medal in 1889.

In 1899, Edison was awarded the Edward Longstreth Medal of The Franklin Institute.

He was named an Honorable Consulting Engineer at the Louisiana Purchase Exposition World's fair in 1904.

In 1915, Edison was awarded Franklin Medal of The Franklin Institute for discoveries contributing to the foundation of industries and the well-being of the human race.

In 1920, The United States Navy department awarded him the Navy Distinguished Service Medal.

In 1923, The American Institute of Electrical Engineers created the Edison Medal and he was its first recipient.

In 1927, he was granted membership in the National Academy of Sciences.

On May 29, 1928, Edison received the Congressional Gold Medal.

Life magazine (USA), in a special double issue in 1997, placed Edison first in the list of the "100 Most Important People in the Last 1000 Years", noting that the light bulb he promoted "lit up the world". In the 2005 television series The Greatest American, he was voted by viewers as the fifteenth-greatest.

In 2008, Edison was inducted in the New Jersey Hall of Fame.

In 2010, Edison was honored with a Technical Grammy Award.

In 2011, Edison was inducted into the Entrepreneur Walk of Fame, and named a Great Floridian by the Florida Governor and Cabinet. 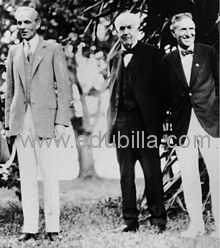