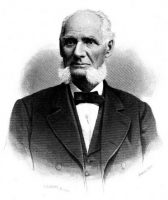 His dream began in 1852 when, after becoming lost near the summit of Mount Washington, Sylvester Marsh knew that there had to be a better way for people to reach the highest mountain peak in the Northeast. Upon his return home, he immediately started working on a plan to build the world's first mountain-climbing cog railway.Marsh, a native of Campton, New Hampshire, had made his fortune in Chicago's meat-packing industry and was considered by his contemporaries to be a creative and innovative thinker. However, upon first presenting his idea to members of the New Hampshire Legislature, they laughed at Sylvester Marsh and said that he "might as well build a railway to the Moon."

Undaunted, Marsh began the task of building his mountain climbing railway, along with inventors Herrick and Walter Aiken, a father-and-son team from Franklin, New Hampshire. The task was not an easy one, as equipment and materials had to be hauled by oxen for 25 miles to Bretton Woods, and then another six miles through thick forest to the base of Mount Washington. But on July 3, 1869, 'Old Peppersass' became the first cog-driven train to climb 6,288-foot Mount Washington.One Hundred and Forty Years later, The Mount Washington Cog Railway is a National Historic Engineering Landmark and part of our American heritage. Complete with vintage steam engines and replica coaches, as well as biodiesel locomotives, the Mount Washington Cog Railway is a "must do" while visiting the White Mountains of New Hampshire.

In 2008, The Presby and Bedor families, pictured above in The Cog's museum, celebrated 25 years as proud owners of the Mount Washington Cog Railway. Under their stewardship, they and their dedicated staff have restored all six coal-fired locomotives, built a new base station, replaced the tracks and improved the switching system, along with the many improvements to the grounds and maintenance facilities.As the highlight of the 25th year of ownership, the new biodiesel locomotive was introduced into the line-up in 2008. This engineering marvel ties together the past to the future and perpetuates the innovative engineering tradition The Cog was founded on.