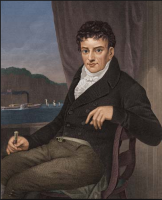 Robert Fulton was a colonial American engineer and inventor who is widely credited with developing the first commercially successful steamboat. In 1800, he was commissioned by Napoleon Bonaparte to design the "Nautilus", which was the first practical submarine in history.He is also credited with inventing some of the world's earliest naval torpedoes for use by the British Royal Navy.

Fulton became interested in steam engines and using them on steamboats in 1777 when he was around age 12 and visited state delegate William Henry of Lancaster, Pennsylvania, who himself had earlier learned about inventor James Watt, (1736-1819), and his Watt steam engine on a visit to England.

Robert Fulton was born on a farm in Little Britain, Pennsylvania, on November 14, 1765. He had at least three sisters – Isabella, Elizabeth, and Mary, and a younger brother, Abraham. His father, Robert, had been a close friend to the father of painter Benjamin West, (1738-1820). Fulton later met West in England and they became friends.

Fulton stayed in Philadelphia for six years, where he painted portraits and landscapes, drew houses and machinery, and was able to send money home to help support his mother. In 1785 he bought a farm at Hopewell Township in Washington County for £80 Sterling and moved his mother and family into it. While in Philadelphia, he met Benjamin Franklin, (1705/1706-1790), then known not only for his political and writing abilities but his scientific and inventing knowledge, and other prominent figures. At age 23 he decided to visit Europe.

Fulton took several letters of introduction to Americans abroad from the individuals he had met in Philadelphia. He had already corresponded with Benjamin West, and West took Fulton into his home, where Fulton lived for several years. Fulton gained many commissions painting portraits and landscapes, which allowed him to support himself, but he continually experimented with mechanical inventions.

He published a pamphlet about canals and patented a dredging machine and several other inventions. In 1797 he went to Paris where his fame as an inventor was well known. In Paris, then along with London, the scientific centers of the 18th Century world, Fulton studied languages French, and German, along with mathematics and chemistry. He began to design torpedoes and submarines. In Paris, Fulton met James Rumsey, (1743-1792), who sat for a portrait in West's studio, where Fulton was an apprentice. Rumsey was an inventor from Virginia who ran his own first steamboat up the Potomac River near Shepherdstown, then in Virginia in 1786. As early as 1793, Fulton proposed plans for steam-powered vessels to both the United States and British governments, and in England he met the Duke of Bridgewater (Francis Egerton), (1736-1803), whose canal, the first to be constructed in Britain, was being used for trials of a steam tug. Fulton became very enthusiastic about the canals and in 1796 wrote a treatise on canal construction, suggesting improvements to locks and other features. Working for the Duke of Bridgewater between 1796 and 1799, he had a boat constructed in the Duke's timber yard, under the supervision of Benjamin Powell. After installation of the machinery supplied by the engineers Bateman and Sherratt of Salford, the boat was duly christened "Bonaparte" in honour of Fulton having served under Napoleon. After expensive trials, because of the configuration of the design,it was feared the paddles may damage the clay lining of the canal and the experiment was eventually abandoned. In 1801 the Duke, impressed by the "Charlotte Dundas" constructed by William Symington, (1764-1831), decided to order eight of such vessels for his canal, but when he died in 1803, the order was cancelled. Symington had successfully tried steamboats in 1788, and it seems probable that Fulton was aware of these developments.

The first successful trial run of a steamboat had been made several years earlier by inventor John Fitch, (1743-1798), on the Delaware River on August 22, 1787, in the presence of delegates from the Constitutional Convention, then observing and taking a break from its summer-long sessions at Independence Hall. It was propelled by a bank of oars on either side of the boat. The following year Fitch launched a 60-foot (18 m) boat powered by a steam engine driving several stern mounted oars. These oars paddled in a manner similar to the motion of a swimming duck's feet. With this boat he carried up to thirty passengers on numerous round-trip voyages on the upper Delaware River between Philadelphia and Burlington, New Jersey.

Fitch was granted a patent on August 26, 1791, after a battle with Rumsey, who had created a similar invention. Unfortunately the newly created Patent Commission did not award the broad monopoly patent that Fitch had asked for, but a patent of the modern kind, for the new design of Fitch's steamboat. It also awarded patents to Rumsey and John Stevens, (1749-1838), for their steamboat designs, and the loss of a monopoly caused many of Fitch's investors to leave his company. While his boats were mechanically successful, Fitch failed to pay sufficient attention to construction and operating costs and was unable to justify the economic benefits of steam navigation. It was Fulton who would turn Fitch's idea into a more profitable proposition decades later.

In 1797, Fulton went to France, where Claude de Jouffroy (1751-1832), had made a working paddle steamer in 1783, and commenced experimenting with submarine torpedoes and torpedo boats. Fulton is the exhibitor of the first panorama painting to be shown in Paris, which was complete by 1800 "Vue de Paris depuis les Tuilerie" painted by Pierre Prévost, (1764-1823), Jean Mouchet and Denis Fontaine. The street where his panorama was shown is still called "'Rue des Panoramas'" (Panorama Street) today.

Fulton designed the first working submarine, the "Nautilus" between 1793 and 1797, while living in France. When tested his submarine went underwater for 17 minutes in 25 feet of water. He asked the government to subsidize its construction but he was turned down twice. Eventually he approached the Minister of Marine himself and in 1800 was granted permission to build.The shipyard Perrier in Rouen built it and it sailed first in July 1800 on the Seine River in the same city.

In France, Fulton also met Robert R. Livingston, (1746-1813), who was appointed U.S. Ambassador to France in 1801, who was also of a scientifically curious mind, and they decided to build a steamboat together and try running it on the Seine. Fulton experimented with the water resistance of various hull shapes, made drawings and models, and had a steamboat constructed. At the first trial the boat ran perfectly, but the hull was later rebuilt and strengthened, and on August 9, 1803, this boat steamed up the River Seine, but sank. The boat was 66 feet (20.1 m) long, 8 feet (2.4 m) beam, and made between 3 and 4 miles per hour (4.8 and 6.4 km/h) against the current.

In 1804, Fulton switched allegiance and moved to England, where he was commissioned by the Prime Minister William Pitt the Younger, (1759-1806), to build a range of weapons for use by the Royal Navy during Napoleon's invasion scares. Among his inventions were the world's first modern naval "torpedoes" (modern "mines"), which were tested, along with several other of his inventions, during the 1804 Raid on Boulogne, but met with limited success. Although he continued to develop his inventions with the British until 1806, the decisive naval victory by Admiral Horatio Nelson at the 1805 Battle of Trafalgar greatly reduced the risk of French invasion, and Fulton found himself being increasingly ignored.

In 1806, Fulton returned to America and married Harriet Livingston, the niece of Robert Livingston and daughter of Walter Livingston. They had four children: Robert, Julia, Mary and Cornelia. In 1807, Fulton and Livingston together built the first commercial steamboat, the "North River Steamboat" (later known as the "Clermont"), which carried passengers between New York City and upstream to the state capital Albany, New York. The Clermont was able to make the 150-mile trip in 32 hours. From 1811 until his death, Fulton was appointed by the Governor of New York, a member of the Erie Canal Commission.

Fulton's final design was the floating battery "Demologos" the world's first steam-driven warship built for the United States Navy for the War of 1812. The heavy vessel was not completed until after his death and was renamed the "Fulton" in his honor.

From October 1811 to January 1812, Fulton, along with Livingston and Nicholas Isaac Roosevelt (1787-1854), worked together on a joint project to build and travel from Pittsburgh, Pennsylvania on their specially designed and built a new steamboat "New Orleans" solid enough for a long trip down the mid-western Ohio River, with stops at Wheeling, Virginia, Cincinnati, Ohio, past the "Falls of the Ohio" at Louisville, Kentucky, to near Cairo, Illinois and the juncture with the Mississippi River, past St. Louis and follow the "Big Muddy" as it was acquiring the nickname, all the way down past Memphis, Tennessee and Natchez, Mississippi to the city of New Orleans on the Gulf of Mexico coast, this just a decade after the United States had acquired the Louisiana Territory from France and the rivers were not well settled, mapped or protected. By achieving this first breaking voyage and also proving the ability of the boat to reverse and go back upstream, changed the entire transportation outlook for the American heartland.

Fulton died in 1815 in New York City from tuberculosis (then known as "consumption"). He had been walking home on the frozen Hudson River when one of his friends, Addis Emmet, fell through the ice. In the attempt to rescue his friend, Fulton got soaked with icy water and on the journey home he caught pneumonia. When he got home his sickness worsened. He contracted consumption and died at 49 years old. He is buried in the Trinity Church Cemetery for Trinity Church (Episcopal) at Wall Street in New York City, alongside other famous Americans such as former U.S. Secretaries of the Treasury, Alexander Hamilton and Albert Gallatin. His descendants include former Major League Baseball pitcher Cory Lidle.Often credited with inventing the steamboat, Robert Fulton was actually the man who put the design into practice. As a young man, Fulton dreamed of becoming a painter and went to Paris to study art. His commissions were few, and he turned to engineering and inventions. In Paris, Fulton designed an experimental submarine, which caught the eye of Robert Livingston, then the wealthy American ambassador to France. Livingston convinced Fulton to return to the United States and concentrate on industrial and steamboat design.

Fulton's first boat, the "Clermont", was tested on the Hudson River. The former painter had shipped a small steam engine from England and constructed a hull similar to that of fast ocean- going ships. In the hull, he placed the engine, and on each side, a primitive paddle wheel. At the test in 1807, the "Clermont" initially failed; however, after a few adjustments to the engine, the boat carried on its way to Albany, arriving thirty-two hours later. It had moved against the Hudson current at an average of five miles an hour. 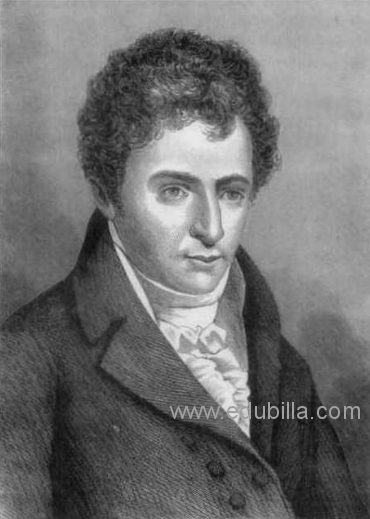 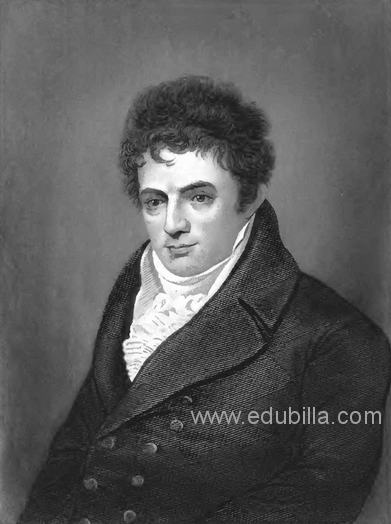