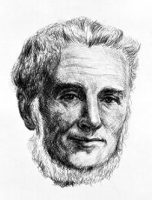 Robert Foulis (1796 – 1866) was a Canadian inventor, civil engineer and artist. Born in Glasgow, Scotland, Foulis moved to Canada in 1818, following the death of his first wife in childbirth.

Studies and his Career

Foulis studied medicine, engineering and painting in Glasgow and Edinburgh. In 1818 he was painting in Halifax and in 1821 moved to Saint John. He installed the machinery in the second and third steamers to ply the Saint John River, established the Saint John Foundry, lectured in chemistry, established a "School of Arts" and was a founding member of the MECHANICS' INSTITUTE.

Foulis is credited with inventing an apparatus for decomposing coal to make illuminating gas. He is also said to have invented an electric dynamo, but to have made no use of the invention. In 1853 he conceived the idea for what was undoubtedly his greatest invention, a steam foghorn, and a year later a committee of the New Brunswick legislature reported favourably on this invention. From time to time between 1854 and 1859 he agitated for the installation of his fog-horn on Partridge Island in Saint John harbour, but no action was taken by the assembly. In 1859 T. T. Vernon-Smith obtained Foulis’ plans and was granted permission to erect a steam foghorn, the first to be installed anywhere in the world, on the island. Foulis petitioned the assembly and in 1864 the house passed a resolution recognizing Foulis’ claim as inventor of the foghorn and of the coded system of telegraphing associated with its use. However, this was the extent of the recognition granted to him and he has not been credited with the invention, which is ranked by later historians as one of the most outstanding in the development of navigation aids.

Due to business ventures of varying success and his failure at patenting his foghorn, Foulis died in poverty.