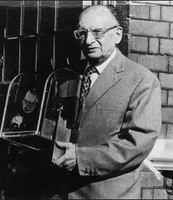 Paul Eisler who lived between (1907 – 1992) was an Austrian inventor born in Vienna. Among his innovations were the printed circuit board. In 2012, Printed Circuit Design & Fab magazine named its Hall of Fame after Eisler.

Paul Eisler inventor of printed circuit board was a very famous inventor of Austria. He is known best for his invention of printed circuit board and it can be said that this invention led him to be very famous scientist of the field of electronics. He was an Austrian by the nationality and descent pattern.  He was born in the year of 1907 in the month of August on 3rd day and his place of birth was as Vienna, which is located in Austria. This city is currently capital of Austria. He was a Jewish by the religion and hence he faced many problems over there in Austria, throughout his life span.

He started his formal education, when he was just five years of age and for this purpose he was sent to the local town school. After studying there for some years, he joined Hallway College for his high secondary school studies and there his interest built up in the field of engineering. He earned his HSSC from there and later on moved to Vienna city. As mentioned, he was just interested in the studies of engineering; hence he chose the same field for his further study over there when he was offered an admission in the Vienna University of Technology. There he studied for some years and as a result, earned his engineering degree of graduation in the year of 1930, in the age of just 23 years.

After the completion of his education in the field of engineering, he was much passionate to start his career in the field. But as mentioned above, he was a Jew by religion so he was not allowed to start his work as an engineer there in Austria. As a result, he started his work in English Company.

Inventor of Printed Circuit Board

Paul Eliser is widely credited as the inventor of the circuit board in printed form and this was the invention which made him a great name of the field of electronics sciences. He was in Hampstead those days, when he started his formal work for this invention. Later on, he was hired to work on this thing and as a result succeeded in inventing the first printed circuit board.

This is also known as a PCB and it works on both the principles of mechanical as well as electrical engineering. The method of its working is that it supports in the mechanical format working on mechanical rules while the mode of connection is taken out through electrical method. In this thing, conductive tracks are used in the way to connect different electronic components electrically and to make it usable.