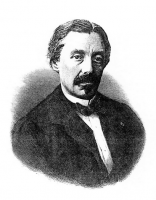 Leon Foucault(1819) was born in Paris, France. He made his first major scientific discovery in the 1850s, when he exhibited experimental proof of the earth's rotation using Foucault's Pendulum. In 1852, he further demonstrated the earth's rotation with a gyroscope. In 1862, he became the first to accurately identify the speed of light. He died on February 11, 1868, in Paris, France.

Physicist Jean Bernard Leon Foucault was born in Paris, France, on September 18, 1819. His father, Jean Leon Fortune Foucault, was a reputable publisher and bookseller who retired early due to illness. When the junior Foucault was 9 years old, his father passed away. From then on, he was raised by his widowed mother in a house at the corner of rue de Vangirard and rue d'Assas in Paris. The young Foucault's own health was precarious. As a result, he was shy and lacked self-confidence.

As a teen, Foucault attended College Stanislas, where his teachers called him lazy. Despite his failure to display academic prowess, Foucault showed an early talent for building machines. Because he was dexterous with his hands, his mother encouraged him to go to medical school and pursue a career as a surgeon. Studying medicine under Alfred François Donne, Foucault at first showed promise, until he realized he couldn't stomach the sight of blood. His interest gradually turned to experiments in photography with friend Armand Hippolyte Louis Fizeau. After dropping out of medical school, Foucault became Donne's assistant.

While working under Donne, Foucault discovered a means of taking photos through the lens of a microscope. In the process, he invented a strong source of light for illuminating his microscopic subjects. In 1845, Foucault took over Donne's position as editor of the scientific newspaper Journal des Debats.

Foucault made his first major scientific discovery in the early 1850s, when he exhibited experimental proof of the earth's rotation through the use of a pendulum, aptly dubbed Foucault's Pendulum. In 1852, he extrapolated on this principal by demonstrating the earth's rotation with a gyroscope. Three years later, Foucault earned the Copley Medal of the Royal Society for his efforts in proving Earth's diurnal rotation.

In 1855, Foucault was appointed physicist by the Imperial Observatory, where he experimented with improvements to telescope technology (including the use of silvered concave mirrors) and land-surveying equipment.

In 1862, Foucault became the first to accurately identify the speed of light. He did so by using a rotating mirror in an enclosed space. Afterward, his experiments became increasingly focused on precision engineering.

Foucault's work was interrupted by a stroke in July 1867. By October of that year, he could no longer feel his hands. Foucault died of a brain illness on February 11, 1868, in Paris. Some historians theorize that exposure to the chemicals he used in his experiments brought on his illness and hastened his death.