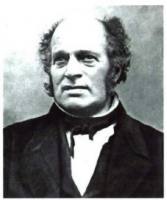 Edmund Davy was the first to discover a spongy form of platinum with remarkable gas absorptive properties. Justus Liebig later prepared this in a purer form able to absorb up to 250 times its volume of oxygen gas.

Further, Edmund Davy discovered that even at room temperature, finely divided platinum would light up from heat in the presence of a mixture of coal gas and air. In another such experiment, in 1820, he found that with the platinum, alcohol vapours were converted to acetic acid. (Humphrey Davy had discovered a few years earlier that a hot platinum wire lit up in a mixture of coal gas and air.)

This release of energy from oxidation of the compounds, without flame, and without change in the platinum itself, was a sign of the catalytic property of platinum investigated later by Johann Döbereiner and other chemists.

In 1829, Edmund Davy found that the use of zinc blocks would prevent corrosion of the iron structure of buoys.

This is an example of cathodic protection, an electrochemical technique developed five years earlier by Humphry Davy to prevent galvanic corrosion. He had recommended that the Admiralty should attach iron blocks to protect the copper sheathing on the hulls of Navy vessels. (The method was shortly discontinued because of an unfortunate side effect - the speed of the ships was reduced by increased fouling by marine life. The protective method reduced the release of copper ions that had otherwise poisoned the organisms and controlled their growth.)

In 1836, Edmund Davy discovered a gas which he recognised as "a new carburet of hydrogen." It was an accidental discovery while attempting to isolate potassium metal. By heating potassium carbonate with carbon at very high temperatures, he produced a residue of what is now known as potassium carbide, (K2C2), which reacted with water to release the new gas. (A similar reaction between calcium carbide and water was subsequently widely used for the manufacture of acetylene.)

Thereafter it was forgotten until Marcellin Berthelot rediscovered this hydrocarbon compound in 1860, for which he coined the name “acetylene.”

Edmund Davy was a cousin of Humphry Davy, the famous chemist who also invented the Davy lamp for the safety of miners. Edmund spent some time as Humphry's research assistant in his chemistry laboratory at the Royal Institution. When, in October 1807, Humphry accomplished the electrolytic preparation of potassium and sodium, Edmund described that his cousin was so delighted with this achievement that he danced about the room in ecstasy.

Humphry Davy's younger brother, Dr. John Davy, also was a chemist who spent some time assisting Humphry in his chemistry research at the Royal Institution. John was the first to prepare and name phosgene gas.

Edmund William Davy (born in 1826), son of Edmund Davy became professor of medicine in the Royal College, Dublin, in 1870.