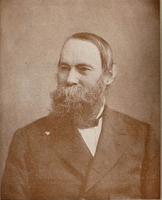 Benjamin Chew Tilghman, an American soldier and inventor, is best known as the inventor of the process of sandblasting. Legend has it that Tilghman had seen the effect of wind-blown sand on windows in the desert while a General in the army, and that this was the basis of his sandblasting invention.

In 1870, Tilghman invented the sandblasting process and filed a patent for it in the U.S. (US patent 104,408), detailing many of the applications for which this technique is uniquely suited, such as sharpening files, engraving bottles, cleaning boilers or bringing out the grain in wood. Later that year a patent was issued in the UK.

A year later he was awarded the Great Medal of Honor for his invention, at the 40th Exhibition of the American Institute of the City of New York. Shortly after, he was also awarded the Elliott Cresson Medal by the Franklin Institute. He refined the technique for various purposes, and in 1877 took out a patent (US patent 252,279) for sharpening files, which he marketed as "Liquid Grindstone“.

His first company was formed with his brother in Philadelphia, B. C.1973_Tilghman_Wheelabrator_blastwheel_170x134.jpg & R. A. Tilghman, for the production of chilled iron shot for the stone industry. Around 1879, Benjamin moved to London forming a new company, Tilghman's Patent Sand Blast Co. at Gray's Inn Road. This company used one of his patent methods for sharpening files and rasps.

From London, he moved to Sheffield, the centre of steel production in England at the time, and later moved to Altrincham in Cheshire, being resident there around 1885, having invested in the machine tool company "George Richards Ltd“.