Anyos Istvan Jedlik (1800 – 1895) was a Hungarian inventor, engineer, physicist, and Benedictine priest of Slovak origin. He was also a member of the Hungarian Academy of Sciences, and author of several books. He is considered by Hungarians and Slovaks to be the unsung father of the dynamo and electric motor.

Jedlik was born in Szimo in the county of Komarom; his education began at Nagyszombat and Pozsony high schools. In 1817 he became a Benedictine and from that time continued his studies at the schools of that order. He lectured at Benedictine schools up to 1839, then for 40 years at the Budapest University of Sciences department of physics-mechanics. Only few guessed at that time that his beneficial activities would play a important part in bringing up a new generation of physicists. In 1845 he began teaching his pupils in Hungarian in lieu of Latin. Through his textbook he is regarded as one of the establishers of Hungarian vocabulary in physics. He became the dean of the faculty of arts in 1848, and by 1863 he was rector of the University. From 1858 he was a corresponding member of the Hungarian Academy of Sciences and from 1873 an honorary member.

He preceded his contemporaries in his scientific work, but he did not speak about his most important invention, his prototype dynamo, until 1856; it was not until 1861 that he mentioned it in writing in list of inventory of the university. Although that document might serve as a proof of Jedlik's status as the originator, the invention of the dynamo is linked to Siemens' name because Jedlik's invention did not rise to notice at that time. In 1827 he started experimenting with electromagnetic rotating devices which he called "lightning-magnetic self-rotor" (approximate translation). In the prototype, both the stationary and the revolving parts were electromagnetic. In 1873 at the World's Fair in Vienna he demonstrated his lighting conductor.

After his retirement he continued working and spent his last years in complete seclusion at the priory in Gyor.

Anyos Jedlik's best known invention is the principle of self-excitement. With the single pole electric starter, he formulated the concept of the dynamo at least 6 years prior to Siemens and Wheatstone. In essence the concept is that instead of permanent magnets, two electromagnets opposite each other induce the magnetic field around the rotor. As one side of the coil passes in front of the north pole, crossing the line of force, current is thus induced. As the frame rotates further the current diminishes, then arriving at the front of the south pole it rises again but flows in the opposite direction. The frame is connected to a commutator, thus the current always flows in the same direction in the external circuit. 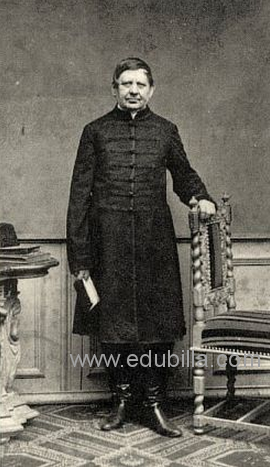 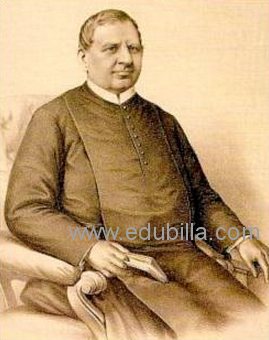