The College of Veterinary & Animal Science was started in 1954, at Bikaner, the heart of the Great Thar Desert, keeping in view the importance of livestock in the rural economy of the state in general and this area in particular. It was started as the government college and named as the Rajasthan Veterinary College. Later on, it became a part of the faculty of Medicine and Veterinary of the Rajasthan University, Jaipur. Soon, in 1962, a separate Rajasthan Agriculture University was started and the college became the part of the faculty of this university. Soon, in 1964, the University of Udaipur was established and the college along with the wing of Agriculture and allied sciences became affiliated with it. This university was renamed as Mohan Lai Sukhadia University and then Sukhadia University. The Rajasthan Agricultural University (RAU), formerly a part of the Sukhadia University, Udaipur, became a separate entity on Ist of August 1987 because of promulgation of an Ordinance (Ordinance No. 13 of 1987) by the Government of Rajasthan, which was later enacted by an Act of Rajasthan State Legislation (Act No. 39 of 1987). RAU has been renamed as Swami Keshwanand Rajasthan Agricultural University, Bikaner (SKRAU, Bikaner) vide Gazette notification No. F. 4 (2) vidhi/2/2009 dated June 09, 2009. In May 2010, it become the part of The Rajasthan University of Veterinary and Animal Sciences (RAJUVAS), Bikaner which was established under sub section (3) of section 1 of the Rajasthan University of Veterinary and Animal Sciences Act, 2010 under the Vice–Chancellorship of Prof. A.K.Gahlot.
The College of Veterinary and Animal Science, Bikaner is housed in sprawling lush green campus spread in an area of about 200 acres under erstwhile Ganga Avenue consisting Bijey Bhawan, the then State Museum and State Library’. After its inception in 1954, it has expanded horizontally in terms of 17 departments having laboratories equipped with sophisticated instruments and gadgets; well developed library with >30,000 books and journals; a workshop with 2 tube wells and 6 vehicles; examination hall of the capacity of >200 students; clinical complex having indoors, outdoors, dormitory and out patient departments of major clinical departments; apex center for animal disease diagnosis, monitoring & surveillance etc. The facilities for students are excellent in terms of 5 boys’ hostels, 2 girls’ hostels; spacious canteen and an elegant auditorium. The college is having ample student and faculty amenities. Staff colonies of the college have 92 quarters for all cadres. Ample play grounds like, football, hockey, basketball, tennis, volleyball, kabaddi, badminton, TT, pavilion etc. are there within the campus. Moreover, One Indoor hall for TT and badminton and Dr. Karani Singh Stadium are also located across the road. Heritage buildings amalgamate very well with latest ones in the campus. The campus is having a Bank located within and a post-office, located just attached to the campus. The college is offering PG programme in 15 disciplines and doctoral programmes in 11disciplines. At present, 19 research schemes are running in various disciplines of the faculty of veterinary and animal science. Apart from this, the college is also having a farmland of around 7500 acres at Kodamdesar (25 km away) with well-built infrastructure for sheep and goat. This land is likely to be utilized for fodder and agricultural production in near future after lying of IGNP tributaries through the farmland. The Directorate of Research (Veterinary and Animal Science) is also located within the campus. 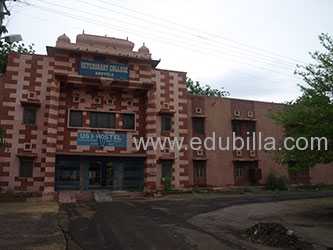