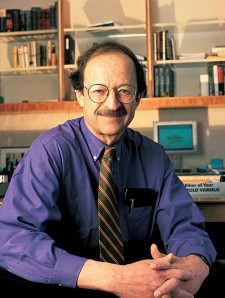 Harold Eliot Varmus is an American Nobel Prize-winning scientist and the 14th Director of the National Cancer Institute, a post to which he was appointed by President Barack Obama. He was born on born December 18, 1939 in Oceanside, New York, U.S. Varmus' research has focused on the genetics of cancer, and he won the 1989 Nobel Prize in Physiology or Medicine for his work on the role of retroviruses in cancer.  In 1993, US President Bill Clinton appointed Varmus to lead the NIH, a post he held for six years. Varmus left the agency in 1999, and in 2000 he became president of Memorial Sloan Kettering Cancer Center in New York. He returned to the NIH in 2010 to direct the NCI, the agency's largest institute. Varmus has received over the course of his career are the National Medal of Science, the Vannevar Bush Award, and elections to the U.S. National Academy of Sciences in 1984 and the Institute of Medicine in 1991.