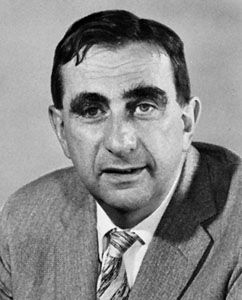 Edward Teller was a Hungarian-born American theoretical physicist. Edward Teller was often called the "father of the hydrogen bomb." Edward Teller was born on January 15, 1908, in Budapest, Austria-Hungary. Teller graduated with a degree in chemical engineering at the University of Karlsruhe and received his Ph.D. in physics under Werner Heisenberg in 1930 at the University of Leipzig. Teller won numerous awards, including the Fermi Prize, the National Medal of Science and, in July, the Presidential Medal of Freedom. He was a member of the American Academy of Arts and Sciences and the National Academy of Science; a fellow of the American Physical Society and the American Nuclear Society; and a member of the scientific advisory boards of the U.S. Air Force and various businesses. Teller suffered a stroke and died in Stanford, California, on September 9, 2003.