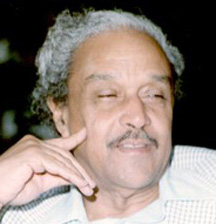 Sir Theodore Wilson Harris (born 24 March 1921) is a Guyanese writer. He initially wrote poetry, but has since become a well-known novelist and essayist. His writing style is often said to be abstract and densely metaphorical, and his subject matter wide-ranging. Harris is considered one of the most original and innovative voices in postwar literature in English.He received Anisfield-Wolf Book Award in 2014 for Lifetime achievement.