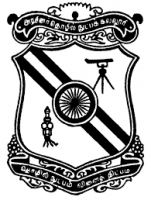 The Government College of Technology, Coimbatore formerly known as Arthur Hope College of Technology, was started in July 1945 in accordance with the general policy of the then Government of Madras to give high priority to technical education under the post-war reconstruction schemes in order to meet the demand for trained engineers for various industrial and development projects in the State and rest of India. The offer of the premises including offices and portions of the workshop and Hostel of the National Electric Works free of rent for a period of three together with a donation of Rs.2, 00,000 by the well known industrialist and philanthropist of Coimbatore the Late G.D. Naidu, enabled the college to be started in July 1945. The college was afterwards shifted to the present permanent site of about 45 hectares on the Thadagam road in June 1950. The College was then renamed as the College of Technology and was affiliated to the University of Madras in 1951, Though initially only Civil and Electrical Engineering branches was introduced in the year 1952.