About ALL INDIA TENNIS ASSOCIATION

Tennis in its present form was conceived in England in the 1870s. In the 1880s the British Army and Civilian Officers brought the game to India. Soon after, regular tournaments like 'Punjab Lawn tennis Championship' at Lahore (Now in Pakistan) (1885); 'Bengal Lawn Tennis Championship' at Calcutta (1887) and the All India Tennis Championships at Allahabad in (1910) were organised. Initially the Britishers like TD Berrington and LC Ogbourne won these championships, however Slowly Indians started picking up the game. Mohd. Saleem of Lahore won the Punjab Championship in 1915 and thereafter consecutively from 1919 to 1926. In 1917 NS Iyer lifted the Bengal Championship. In 1919 Mr. Nagu picked up the prestigious singles crown at the All India Tennis Championship at City's Gymkhana Club at Allahabad. Henceforth the Indians started playing the game with greater distinction.

In March 1920 All India Lawn Tennis Association (AILTA) was formed at Lahore. At this meeting the constitution and by laws were framed on the lines of the constitution of Lawn Tennis Association of Britain. In November 1920, the first AGM of AILTA was held at the Town Hall at Delhi. Samuel Perry O'Donnell, a British member of the Indian Civil Service (ICS) was elected as the first president. In this meeting it was decided to hold the annual 'All India National Championships' at Allahabad and to participate in Davis Cup competition. In its debut, Indian team consisting of SM Jacob, Mohd Saleem, LS Deane and AA Fayzee upset a stronger French team to reach the semi finals. With AITA at the helm of affairs, different Provinces formed Provincial Associations (now known as State Associations and were affiliated to parent organisation. An Inter Provincial Tournament was organised with effect from 1922. Punjab LTA led by Mohd. Saleem became the first champions. This yearly competition continued till the eve of Second World War (1939).

In Wimbledon Indian participation dates back to the years of first Wimbledon, BK Nehru in 1905, Sardar Nihal Singh in 1908 were later joined by M. Saleem, Fayzee brothers and Jagat Mohan Lal who made it to last 16 stages. AA Fayzee and M Saleem represented India in the 1924 Paris Olympics; Saleem reached the semi-finals in singles. India's repeated success at Davis Cup and some fine individual performances in Wimbledon earned the respect of leading tennis playing nations and put her on the world map by 1930's. Teams from Italy, France, Czechoslovakia, England and Yugoslavia visited India. The most notable amongst foreign visitors in 1930's was the great American Bill Tilden - considered by many as the greatest ever in modern tennis, and Henry Cochet an all time great and one of the famous "Four Musketeers" of France. Ghouse Mohd. India's undisputed No.1 reached the quarterfinal at Wimbledon in 1939.

The Inaugural Grass Court National Championship was held at Calcutta 's South Club 'the cradle of the game in the country' in 1946. The Big serving Sumant Misra became the first champion beating Man Mohan Lal. Till 1955 only three Indians, S. Misra (1946,1952), Dilip Bose (1948) and Ramanathan Krishnan 16 yrs old (1953 won the championship. The Foreigners dominated the scene till 1976. The most important to bear the mantle were Roy Emerson (Australia) a Wimbledon and US Open Champion, and Ile Nastase World No. one (1973). India's Ramanathan Krishnan won the title a record number of eight times (1953-1964). Of the other eminent Indians Premjit Lal and Vijay Amritraj were Champions three time each while Jaidip Mukerjea and Ramesh Krishnan took the title twice each. India had the honour of staging the first Asian International Championship in Calcutta in 1949-1950. Dilip Bose emerged as the first Asian Champion. He also has the distinction to be seeded at Wimbledon (15) in 1950. In 1954 the Young Ramanathan Krishnan became the first Junior Wimbledon Champion, the first Asian. 25 years later Ramesh Krishnan emulated his father in 1979. Leander Paes was the third Indian to grab the junior Wimbledon title in 1990.

In 1960's Ramanathan Krishnan, Jaidip Mukerjea and Premjit Lal dominated the game. In 1962 Ramanathan Krishnan earned his highest seeding in Wimbledon (4). In Davis cup, India repeatedly became the Zonal Champions and played the Inter - Zonal finals. History was made when Ramesh Krishnan along with Premjit Lal, SP Misra and Jaidip and RK Khanna as the non-playing Captain steered India to the Cup finals in 1966. They lost the Cup but not before R Krishnan and J Mukerjea beating New Combe and Tony Roche the Wimbledon Champions (1965) in doubles. Premjit Lal and Jaidip Mukerjea together held the National doubles and Asian doubles Championships four times each. In 1970's Vijay Amritraj came on the scene. With teammates Shashi Menon, Jasjit Singh and brother Anand Amritraj, Vijay took India to World Cup Finals for the second time in 1974. India did not play South Africa in the Finals due to political reasons. Vijay made to quarterfinals in US Open in 1973 and 1981; and Wimbledon in 1973 and 1974. After Amritraj brothers Ramesh Krishnan appeared on the scene. He won junior Wimbledon championship and junior French title in 1979 and was ranked number 1 junior in the world. He made to the quarterfinals at Wimbledon (1986) as US Open (twice). He was instrumental in lifting India to the Davis Cup finals for the third time in 1987 by defeating a much more experienced Wally Masur of Australia in straight sets. India though lost to Sweden in the finals. He retired in 1993.

Leander Paes picked up the gauntlet of Indian Tennis by winning the Junior Wimbledon and US Open titles in 1990 - 1991 respectively. He has turned out to be an outstanding Davis Cupper. The Indian Davis Cup Team reached the qualifying round of the World group for the fourth consecutive year in 2003. Leander and Mahesh Bhupathi created history of sorts by reaching the 'Doubles Finals' of all the four Grand Slams in the World and winning the Wimbledon and US Open Doubles titles in 1999. They were declared as no. 1 ranked doubles pair in the world. Till now i.e. June 2003 they have won for India nine Grand Slam Doubles and Mixed Doubles Titles. In 2002, U/14 boys and Girls and U/16 Girls teams reached within the first eight positions of the World Group. The AITA conceptualized and conducted ATF Asia Cup from 1997 to 2000. In the Asian Games at Busan Indian tennis players brought one Gold, one Silver and two Bronze Medals for the country.

The concept of tennis underwent a change in 1968 with Wimbledon and other tournaments going professional with prize money for the players. AITA organised a few Grand Prix tournaments in the 1970`s, but they did not meet with much success as the prize money was too little due to lack of funds. Around early 80s the name of the Association was changed to 'All India Tennis Association' (AITA). From the beginning of 1990's tennis in India has started getting a new look. The financial position of the Association has improved considerably. The Association constructed a full-fledged modern National Stadium at Delhi with a seating capacity of 5000 spectators in 1996. The Organisation, that was functioning from temporary and roving headquarters at Calcutta, Delhi and Madras till now was finally shifted to its permanent location at the R.K. Khanna Tennis Stadium in 1996. While, the far-sighted Mr. RK Khanna and his team made the Association financially viable, the dynamic Mr. Anil Khanna and his colleagues under the President-ship of H'ble External Affairs Minister Sh. Yashwant Sinha are doing the necessary spadework to revamp the entire developmental processes and managerial skills to bring proficiency into every sphere of development. Generally the tennis scene is on the upswing. 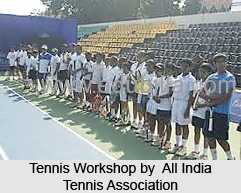 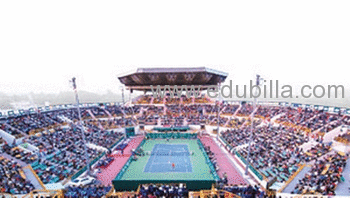 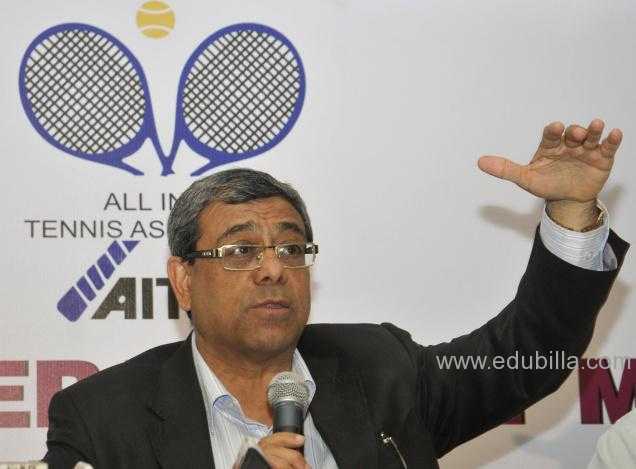