All Saints School, Meerut is located in the heart of the historic city of Meerut in Uttar Pradesh, India. The school is run by the Diocese of Agra, a Christian Minority Trust, who has been the pioneer in spreading education in large parts of Northern India.
The school was founded in the year 1993 with Mrs. H. Brave as its Headmistress. At that time it was known as All Saints English Medium School and initially started running in the premises of St. Thomas Girls Inter College teachers hostel.
The foundation stone of the new school was laid by Late The Rt. Revd. Morris Andrews on 3rd July 1997. The classes in the new school building started from 15th August 1998 and in January 1999, Mrs. A. Abraham was appointed as the Principal.
Under the able leadership of its current Principal Mrs. A. Abraham, the school, with the guidance and support of its Chairman viz. The Bishop of Diocese of Agra, Agra Diocesan Trust Association and Management Committee, has grown phenomenally over the years. The enrollment of the students has increased from about hundred in the year 1999 to around 1600 in the session 2013-14.
The name of the school changed to All Saints School which was decided in the Committee of Management in the year 2000. Since then every year new classes and laboratories have been added and today the school has got one of the best infrastructures in the city. The school boasts of a huge playground, big class rooms, laboratories for Chemistry, Biology, Physics, Computer Lab and a large library.

“To make 'All Saints School' a learning community of motivated students with the staff engaged in realizing the children's full human potential and imparting world class education to each student which fosters academic excellence, physical fitness, psychological and spiritual health and social consciousness.”

All Saints School's mission is to provide a resource based education with global opportunities for academic growth and development, and assure that all students are provided the necessary life skills and competencies to function productively in an ever changing society while retaining Indian values and Philosophy. 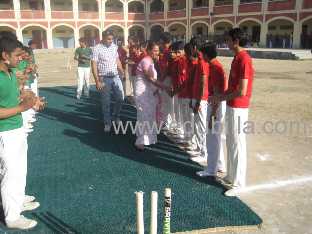