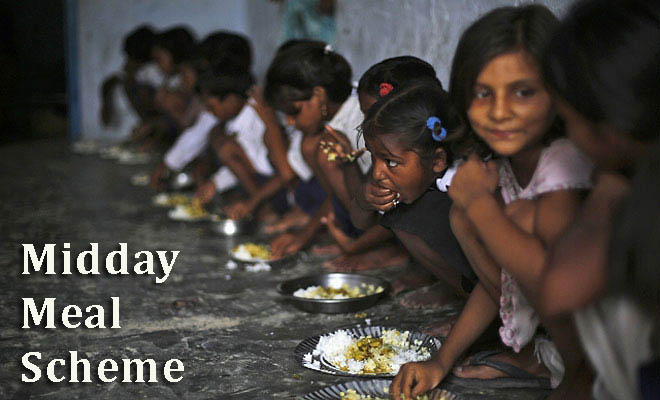 The Main objectives of the Mid day meal scheme are

Providing nutritional support to children of primary stage in drought affected areas during summer vacation. In 2001, MDMS become a cooked Mid day meal scheme under which every child in the Govt and the Govt aided primary schools was to be served a prepared Mid Day Meal with a minimum content of 300 calories of energy and 8-12 gram protein per day for a minimum of 200 days.  In 2002, the scheme had been further extended to serve children studying in Education Guarantee Scheme (EGS) and Alternative & Innovative Education (AIE) centres. There are various updates and value added features added in the later years and the children were served with this mid day meal scheme.

Disadvantages of Mid Day Meal Scheme:-
There are various disadvantages in the Mid day meal scheme like poor information, co-ordination and monitoring. There are many children who fell ill and died due to the unhealthy foods. The food preparation and the maintenance were found to be too bad and ugly.

There are many examples that could catch your eyes and recently there is a latest news from India today that Mid day meal scheme test failed in Karnataka as they could find Ecoli.

Writer Point of View:-
From my point of view, the MID DAY MEAL Scheme was found with a good intention to serve the children.   But, there are various disadvantages and this has to be cleared with the humanity, love and peace. The purpose of this article is to provide a better suggestion with the humanity and not to blame the current scheme.