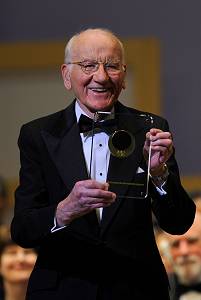 Victor Almon McKusick an internist and medical geneticist, was the University Professor of Medical Genetics and Professor of Medicine at the Johns Hopkins Hospital, Baltimore, MD, USA. He was born on October 21, 1921 in Parkman, Maine. He received his M.D degree from The Johns Hopkins University School of Medicine in 1946, where he has been a member of the faculty continuously since 1947. An innovative clinician, medical educator, and researcher, he established the first medical genetics program and clinic at Johns Hopkins in 1957. He received the Gairdner award in Canada in 1977; the National Medal of Science, the United States’ highest scientific honor, in 2001; and the Japan Prize in Medical Genetics and Genomics this year.