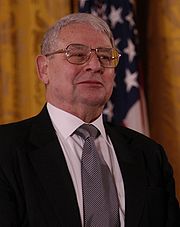 Riccardo Giacconi is an American Nobel Prize-winning astrophysicist who laid the foundations of X-ray astronomy. He is currently a professor at the Johns Hopkins University. He was born on October 6, 1931 in Genoa, Italy. Giacconi received a Ph.D. from the University of Milan in 1954. In 1959 he joined the research firm American Science and Engineering, and in 1973 he moved to the Harvard-Smithsonian Center for Astrophysics. He later directed the Space Telescope Science Institute (1981–93) and the European Southern Observatory (1993–99). In 1999 Giacconi became president of Associated Universities, Incorporated, which operates the National Radio Astronomy Observatory. In 2003, he received the National Medal Of Science.

Giacconi began his award-winning work in X-ray astronomy in 1959, about a decade after astronomers had first detected X rays from the Sun. Because X rays emitted by cosmic objects are absorbed by the Earth’s atmosphere, this radiation could be studied only after the development of sounding rockets that could carry X-ray detectors above most of the atmosphere for brief flights. Giacconi conducted a number of these rocket observations: the data led to the detection of intense X rays from sources outside the solar system, including the star Scorpius X-1 and the Crab Nebula supernova remnant.