The University has been named after Captain Awadhesh Pratap Singh, a distinguished son of the soil and a freedom fighter. The University was established on the 20th July 1968 and got UGC recognition in February 1972. It has membership of the Association of Indian Universities (AIU) and All Commonwealth Association of Universities (ACAU).The APS University is a teaching-cum-affiliating University with its jurisdiction over 150 colleges situated in the districts of Rewa, Satna, Sidhi, Shahdol, Umariya and Singrauli.University The University is located on a 246.20 acres plot of land in the north of Rewa City, at a distance of about 5 kms, with its campus lying on either side of Rewa-Sirmour Road. Besides the over-looking administrative block, the University complex comprises of the departments of Environmental Biology, Physics, Science Block, Humanities Block (including its extension), Ambedkar Bhawan (Hindi Department), MBA Department, Tribal Centre, Computer Centre, Vikram Space Physics Centre, USIC, Central Library, Antarbharati, Arjun Chhatra Griha, Guest House, Yoga Hall Hostels for boys and girls, Auditorium, Stadium, and Staff Quarters. Besides, there are branches of Allahabad Bank, Employment Bureau and Indian Post Office as well as Medical dispensary within the campus. It also has a small meteorological observatory and plans are for a seismological observatory. Situated on the foot of Vindhya's, the University Campus is cozy and environmentally friendly, far from the hustle and bustle of the city life. The Campus presents a scene of Ashrams of ancient times. Still the residents get all the facilities and amenities of modern life, such as, canteen, facilities for Xerox, STD and a small shopping center. The campus also has a large Gymnasium hall, Yoga hall and a big stadium as well as a Lord Shiva temple situated in between a modest park (greenery).

To be the premier institution that offers teaching and learning programmes of the best quality, graduate students who excel and become leaders in the chosen profession contributing to the community, the nation and the world, and prepares individuals of the highest moral fibre. The university, under the dynamic leadership of our honourable Vice-chancellor is working on quite a few ambitious plans. The idea is to develop the university as a knowledge city. Proposals for establishment of Academic Staff College, Science Park, Regional Office of ICSSR, AVRC, Women Studies Research Centre, Fossil Park, Language Lab, Centre for Space Physics, Institute of Bio technology, Institute of Life Sciences and Bio Divesity and Ambedkar Studies have been prepared and sent to suitable agencies for funding and co operation.

To achieve excellence in teaching and research.To preserve and generate knowledge.To cultivate resolute moral values To develop and enhance human resources.To improve the quality of life and contribute to sustainable development of the region and the nation in harmony with our culture, heritage and environment

Baba Farid University of Health & Me.. 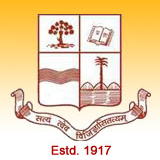