Drawing the nationalistic fervor of education from its parent institution Hindi Vidyapith, which served as a seat for propagating nationalistic virtues during the days of freedom struggle in this region, Takshashila Vidyapith has come in being in year 2010 with the commitment to replicate the same virtues in modern parlance. Sensing the need of the hour, several distinguished educationists and socially awakened souls of this region converged and decided to plant a sapling named Takshashila Vidyapith in Deoghar.

This very sapling of trust and conviction for value laden modern education in growing high in the horizon of education. Since its very inception several distinguished personalities and other distinguished luminaries have graced the school and blessedly appreciated our work towards providing value based modern education to our students. The students of our school have brought laurels in interschool competitions. Recently, seven of our students were part of the National Under 19 Softball Cricket Tournament for Jharkhand State and the Team played in Chennai in 2012, where the Team reached upto semifinal stage. Three of our students are selected for the National Team that has gone to play tournament in Bangladesh. We are growing with maturity as an institution and are advancing strongly into our fourth year.

To build a strong youth force for the future, we have adopted our VISION 2020 resolution and are continuously working to achieve our goal. 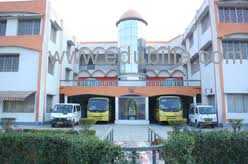