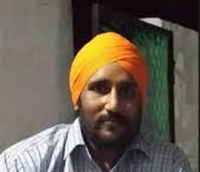 Hardeep Tauo Toganwalia is a professional kabaddi player. He plays as a stopper in circle style kabaddi. He is 6 ft 3 in (1.91 m) tall and weighs 108 kg (238 lb). He is known for his unique playing style, and affectionately known by the name "Tauo". Tauo stands for Father's elder brother in Haryanvi. Opponents gave him the nickname and he has it tattooed on the knuckles of his left fist.