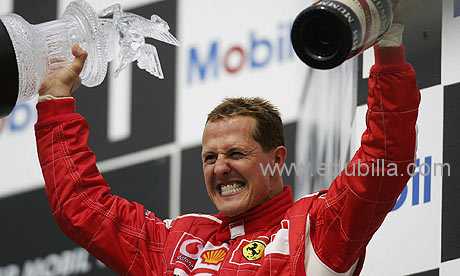 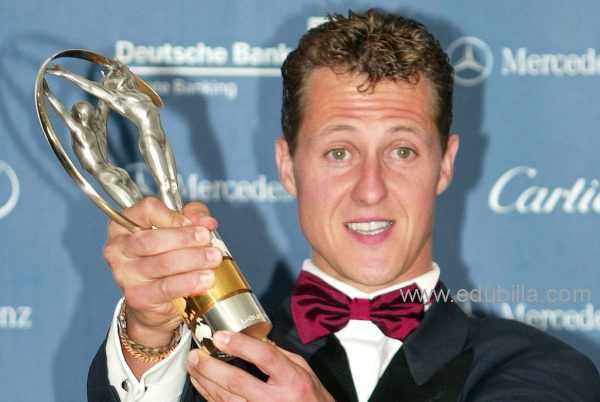 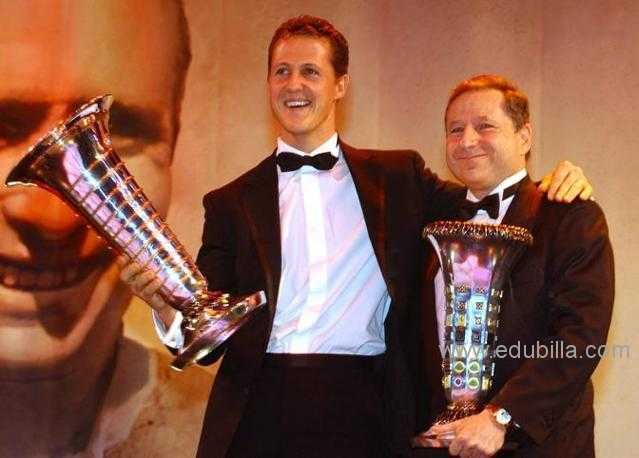 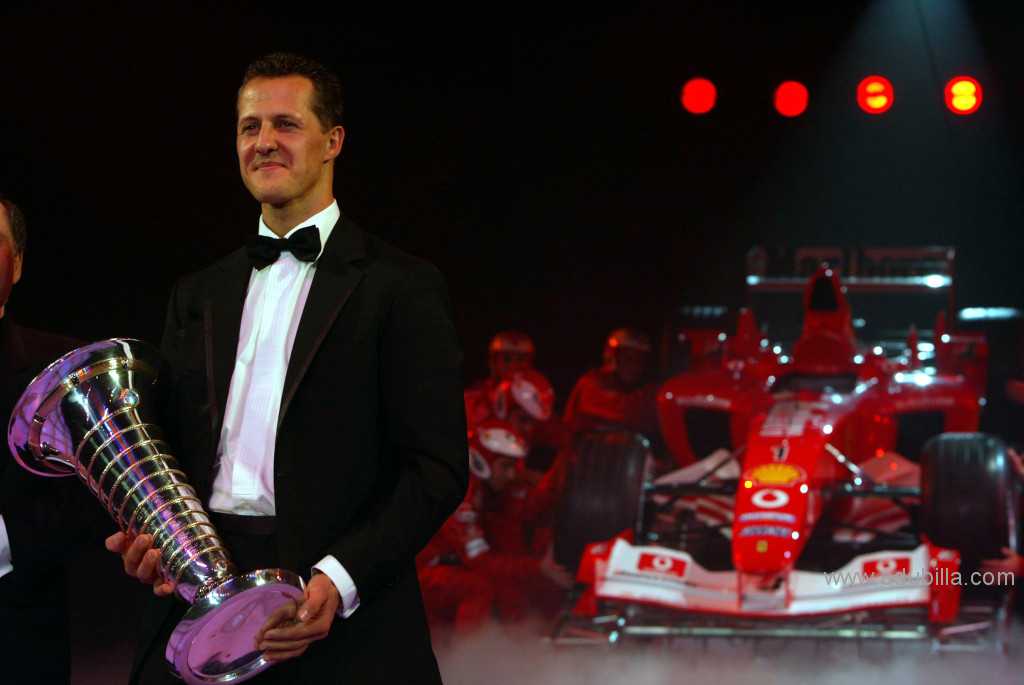 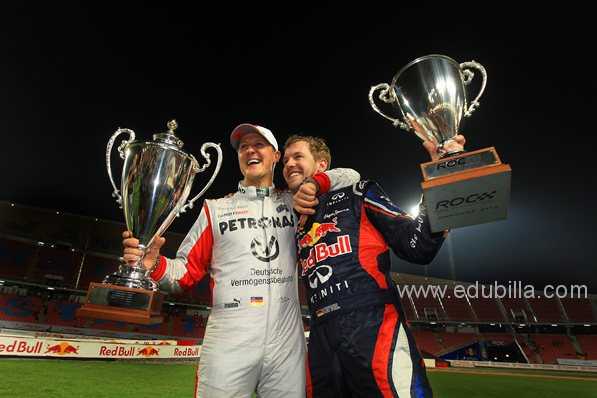 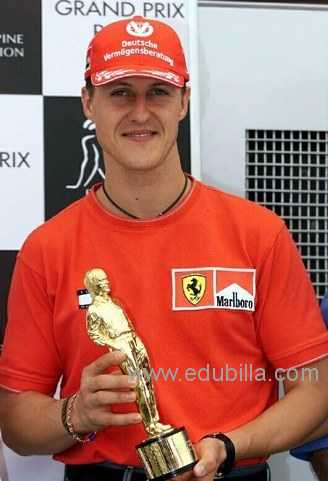 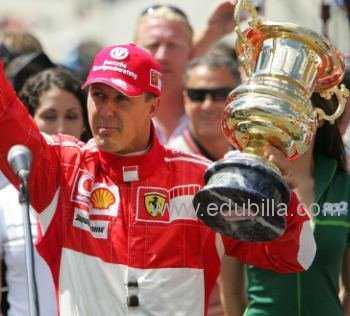 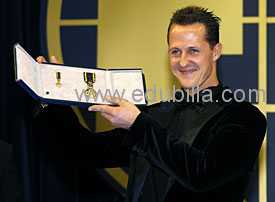 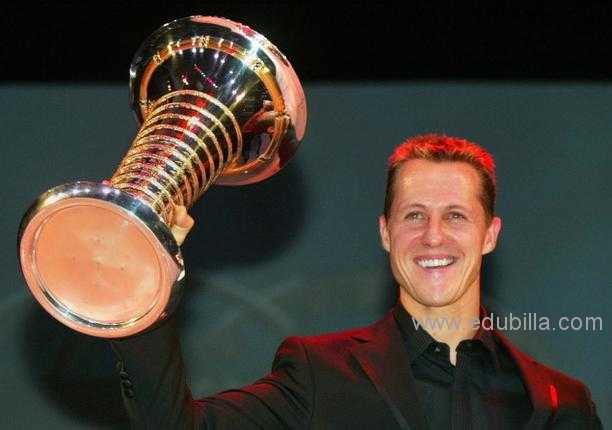 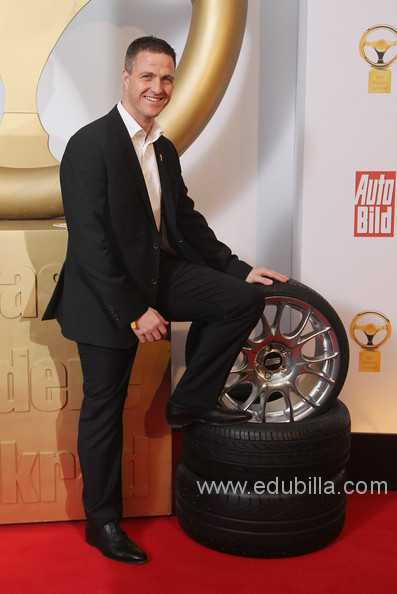 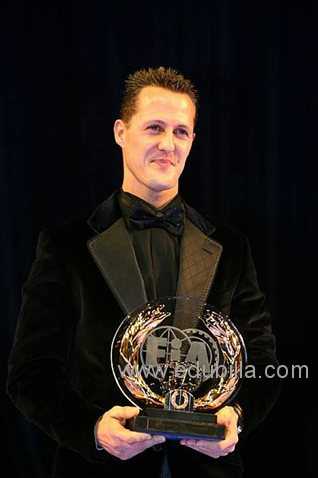 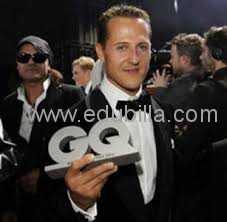 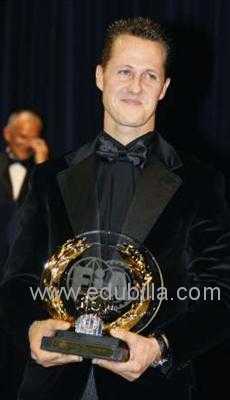 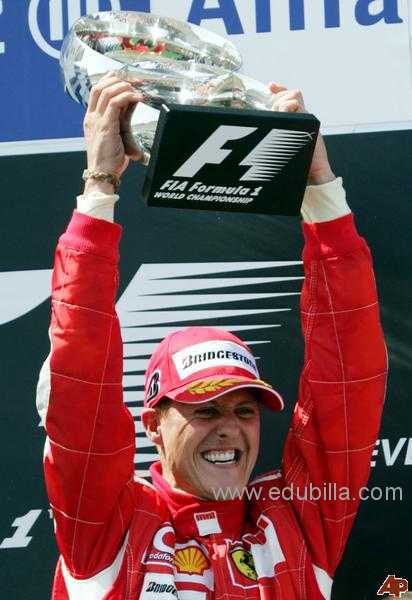 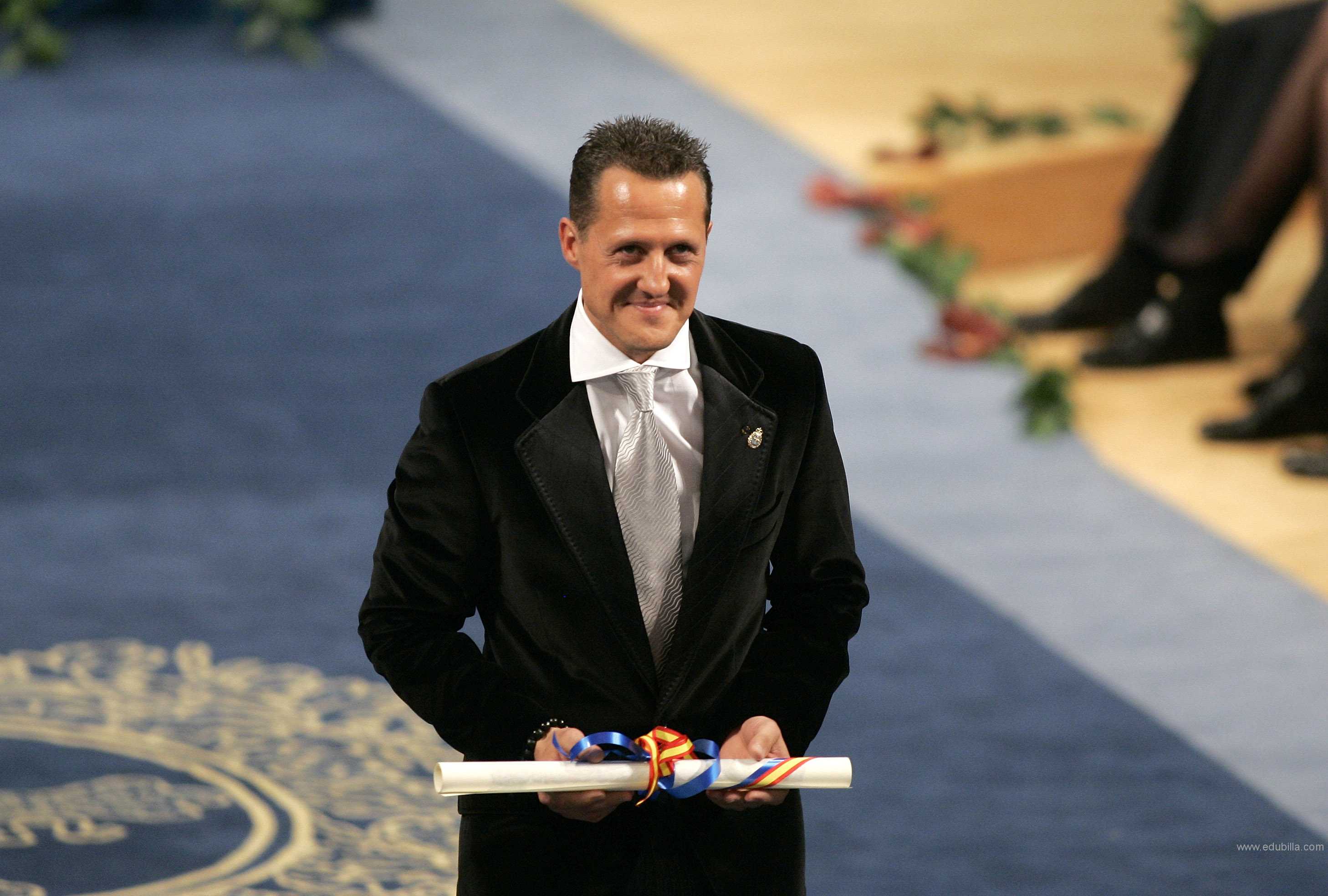 Michael Schumacher (born 3 January 1969) is a German retired racing driver. Schumacher is a seven-time Formula One World Champion and is widely regarded as one of the greatest Formula One drivers of all time.He was named Laureus World Sportsman of the Year twice. He holds many of Formula One's driver records, including most championships, race victories, fastest laps, pole positions and most races won in a single season – 13 in 2004 (the last of these records was equalled by fellow German Sebastian Vettel nine years later). In 2002, he became the only driver in Formula One history to finish in the top three in every race of a season and then also broke the record for most consecutive podium finishes. According to the official Formula One website, he is "statistically the greatest driver the sport has ever seen".

After beginning with karting, Schumacher won the German drivers' championships in Formula König and Formula Three before joining Mercedes in the World Sportscar Championship. After one Mercedes-funded race for the Jordan Formula One team, Schumacher signed as a driver for the Benetton Formula One team in 1991. After winning consecutive championships with Benetton in 1994/5, Schumacher moved to Ferrari in 1996 and won another five consecutive drivers' titles with them from 2000 to 2004. Schumacher retired from Formula One driving in 2006 staying with Ferrari as an advisor.Schumacher agreed to return for Ferrari part-way through 2009, as cover for the badly injured Felipe Massa, but was prevented by a neck injury. Schumacher returned to Formula One on a permanent basis from 2010 with the Mercedes team before retiring for a second time at the conclusion of the 2012 season.

His career was not without controversy, including being twice involved in collisions in the final race of a season that determined the outcome of the world championship, with Damon Hill in 1994 in Adelaide, and with Jacques Villeneuve in 1997 in Jerez. Off the track Schumacher is an ambassador for UNESCO and a spokesman for driver safety. He has been involved in numerous humanitarian efforts throughout his life and donated tens of millions of dollars to charity. Schumacher and his younger brother, Ralf, are the only brothers to win races in Formula One, and they were the first brothers to finish 1st and 2nd in the same race, a feat they repeated in four subsequent races.

In December 2013, Schumacher suffered a serious head injury while skiing. He was airlifted to a hospital and placed in a medically induced coma, having suffered a traumatic brain injury. He was in the coma from 29 December 2013 until 16 June 2014. He left the hospital in Grenoble for further rehabilitation at the University Hospital (CHUV) in Lausanne.On 9 September 2014, Schumacher was brought back to his home for further rehabilitation.In November 2014, Schumacher was reported to be paralyzed and wheelchair-bound as a result of the accident.

Schumacher was honoured many times during his career. In April 2002, for his contributions to sport and his contributions in raising awareness of child education, he was named as one of the UNESCO Champions for sport, joining the other eight, which include Pelé, Sergey Bubka and Justine Henin

-He won the Laureus World Sportsman of the Year award twice, in 2002 and 2004 for his performances in the 2001 and 2003 seasons respectively

The Laureus World Sports Awards is an annual award ceremony honoring remarkable individuals from the world of sports along with the greatest sporting achievements throughout the year. It was established in 1999 by founding patrons Daimler and Richemont and is supported by its global partners Mercedes-Benz and IWC Schaffhausen. The first gala was held on May 25, 2000 in Monte Carlo.

-He shares the record for having the second-most nominations for the award with Roger Federer with six nominations, and is eclipsed only by Tiger Woods who has been nominated seven times.

-In 2008, the Swiss Football Association appointed Schumacher as the Swiss ambassador for the 2008 European football championship.

The 2008 UEFA European Football Championship, commonly referred to as Euro 2008, was the 13th UEFA European Football Championship, a quadrennial football tournament contested by European nations. It took place in Austria and Switzerland (both hosting the tournament for the first time) from 7 to 29 June 2008. The second jointly hosted finals in the competition's history, the tournament was eventually won by Spain, defeating Germany 1–0 in the final; becoming only the second nation to win all their group stage fixtures and win the European Championship itself; an accomplishment matched by France in 1984. Spain were also the first team since Germany in 1996 to win the tournament undefeated.

-On 30 April 2010, Schumacher was honored with the Officier of Légion d'honneur title from French prime minister François Fillon.

-On 13 November 2014, Schumacher was awarded the Millenium Trophy at the Bambi Awards.

The Bambi,often simply called Bambi Awards and stylised as BAMBI, are presented annually by Hubert Burda Media to recognise excellence in international media and television "with vision and creativity who affected and inspired the German public that year,"both domestic and foreign.First held in 1948, they are the oldest media awards in Germany. The award is named after Felix Salten's book Bambi, A Life in the Woods and its statuettes are in the shape of the novel's titular fawn character. They were originally made of porcelain, until 1958 when the organizers switched to using gold, with the casting done by the art casting workshop of Ernst Strassacker in Süßen.

-He was nominated for the Prince of Asturias Award for Sport for 2007, which he won both for sporting prowess and for his humanitarian record.

-In honour of Schumacher's racing career and his efforts to improve safety and the sport, he was awarded an FIA Gold Medal for Motor Sport in 2006.

The 1994 Formula One season was the 45th season of FIA Formula One motor racing. It featured the 1994 FIA Formula One World Championship which commenced on 27 March 1994, and ended on 13 November after sixteen races. The season is remembered as one of the most tragic and controversial seasons in the 1990s, if not in the sport's history. 1994 was one of the closest championships in history as Michael Schumacher won the Drivers' title by a single point from Damon Hill after the two controversially collided at the final round in Adelaide. British constructor Williams-Renault won the Constructors' Championship. However, the 1994 season will also be remembered for the deaths of three-time World Champion Ayrton Senna and Austrian rookie Roland Ratzenberger at the San Marino Grand Prix. Forty-six drivers competed in the 1994 World Championship, including fourteen who made their F1 debut and numerous pay drivers. Mercedes-Benz also returned to the sport for the first time since 1955 as an engine supplier to the Swiss Sauber team.

The 2000 Formula One season was the 51st season of FIA Formula One motor racing. It featured the 2000 FIA Formula One World Championship which commenced on 12 March 2000, and ended on 22 October after seventeen races. Michael Schumacher became Ferrari's first World Drivers Champion for 21 years having clinched the drivers' title at the penultimate race of the season, the Japanese Grand Prix. Ferrari successfully defended their Constructors' title.

The 2001 Formula One season was the 52nd season of FIA Formula One racing. It featured the FIA Formula One World Championship which commenced on 4 March 2001 and ended on 14 October after seventeen races. Michael Schumacher won the Drivers title with a record margin of 58 points, after achieving nine victories and five second places and Ferrari won the Constructors award. The season marked the reintroduction of traction control, with the FIA permitting its use starting at the Spanish Grand Prix. Traction control had been banned since 1994.

While Ferrari's Michael Schumacher had won the 2002 championship by 67 points from his team-mate Rubens Barrichello, the 2003 season was much closer. For a great part of the 2003 season, several drivers from several teams had mathematical chances of winning the world championship. Eight different drivers won a Grand Prix, amongst them three first time winners. Kimi Räikkönen, driving for McLaren-Mercedes, and Juan Pablo Montoya, driving for BMW Williams, both had a chance of claiming the 2003 championship until late in the season, with Räikkönen still mathematically in contention at the final race, the Japanese Grand Prix. Räikkönen lost the championship to Schumacher by two points, although he won only one race to Schumacher's six. Ferrari's defence of the constructor's title was challenged throughout the year by Williams and McLaren, one of the few seasons where there were three front running teams.

The 2004 Formula One season was the 55th season of FIA Formula One motor racing. It featured the 2004 FIA Formula One World Championship, which was contested over an eighteen event series which ran from 7 March to 24 October 2004. The championship was dominated by Michael Schumacher and Scuderia Ferrari Marlboro with the German driver winning the Drivers Championship for the fifth consecutive year and the Italian constructor winning the Constructors Championship for the sixth straight season. Also notable were the success of BAR and Renault, and the relatively poor performance of Williams and McLaren.