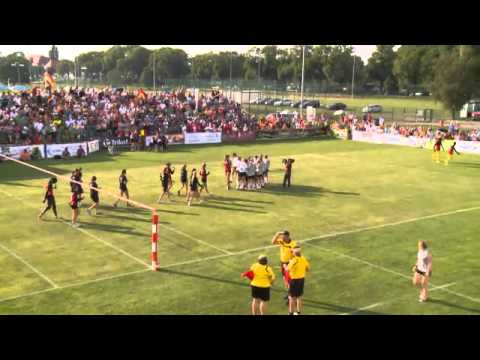 Fistball is a sport of European origin. It is similar to volleyball in that players try to hit a ball over a net. The current men's fistball World Champion is Germany, winners of both the 2011 World Championships and the fistball category at the 2013 World Games.

Fistball is a team sport in which two teams compete against each other on two half-fields, similar to volleyball. They are separated by a center line and a net stretched between two posts up to two meters in height. If the net or posts are touched by either a player or the ball during play, this is considered an error.

Each team consists of five players, with players trying to play the ball across the net from one half of the field of play to the opponents' half - using only their arm or closed fist (unlike in volleyball where open hands are allowed) - in a way in which the opponents cannot return it. After clearing the net, the ball may be contacted up to three times by the five players on each team - with a bounce being permissible before each contact (also unlike in volleyball where no bounce is allowed), but no repeat hits by any individual player within the three attempts. Similar to volleyball, the three hits are ideally used to save, set and spike the ball back into the opponents half, in that order.

The court is a marked rectangle, 50 metres in length and 20 metres in width.The surface should be a level grass court.Matches under floodlight are permitted.

The court is a marked rectangle, 40 metres in length and 20 metres in width.Member associations are free to specify smaller sizes.

A team consists of 5 players and 3 substitutes who become part of the team from their first entry into the match. At least 4 players must play, but a fifth may join at any time (this is known as completion).

One player is the team's captain and has thus to be marked by wearing an appropriate armband. He (she) is the only speaker of the team during the match and is responsible for entry and farewell.

Each team has to wear a strip of uniform, shape and colour

The match is played in sets

The playing time is not more than two times fifteen minutes. The break must not exceed two minutes.

In matches according to clauses 3.1 each team is entitled to a break (time out) of 30 seconds per set after a rally upon notification of the referee.

The players must remain on the field.

Each rally starts with a service and ends with the following fault, the end of a set or half or a stoppage.

Only faults during a rally are scored

Each ball that touches the ground outside the marked court is regarded as the fault of the team that touched it last.

If the ball touches a non-playing person it is regarded as having touched the ground. It is regarded as the fault of the team that touched it last as is catching the ball within the run out if the acting team has lost control over the ball.

In all other cases, catching the ball is regarded as obstruction.

The short period in which fist or arm touch the ball is referred to as blow. The ball must not be pushed.

The ball may only be hit once with fist or arm.

The fingertips must touch the palm of the hand and the thumb must be positioned alongside the palm at each blow using the fist. If the blow is carried

out with the arm, the hand may be opened.

The service may be carried out by any player.

The player serving must throw the ball up visibly and hit it directly across the net (ribbon/string).

The service is deemed to have begun as soon as the ball has left the hand of the thrower.

The service may be carried out running, jumping, standing or walking.

Running and jumping, however, are permissible only if the first groundcontact after the service is behind the service line.

If a standing player has lost contact to the ground during the service, the first ground contact must be behind the service line.

A service by a walking player leads to a service carried out standing and is therefore permissible according to paragraph three.

The service has to be started and carried out without any delay.

If the referee recognises delaying, he announces this by whistling. The service must then be carried out within 10 seconds.

Within each half the ball

- may only be hit once by a player,

- may not be hit more often than three times altogether

The return of the ball is valid if it is hit across the net (ribbon/string) and touches the ground within the opponent's court-half or touches an opponent ,inside or outside the court.

A blow in the opponent's half across the net (ribbon/string) from one’s own half is permissible.

yet crossed the net (ribbon/string).

If the ball hits

- or if it touches the ground outside the court

- or if it directly crosses the central line below the net (ribbon/string), immediately after a block, this is not regarded as a fault. The last service is repeated.

Each fault counts as a point for the opposing team.

The points won are entered on a score card using Arabic numerals, in sequence.

Each match is supervised by a referee, who is assisted by two linesmen and

The member federations may allow two referees for indoor matches. 15

The referee ensures that the rules are complied with and makes decisions at his own discretion. He may be assisted by the linesman.

His (Her) decisions are undisputable.

If two referees supervise the match, each of them has sole decision on faults seen during the match. He/She is responsible for his/her decisions and may not consult the other referee.

way according to the severeness of the offence:

Detailed Fistball Rules Can Be Downloaded From Documents

A standard fistball is hollow, filled with air and is made of leather. It must be inflated evenly until it is round and taut. For indoor fistball games, and for different weather conditions in outdoor fistball games, players can use trade association-approved balls with different surfaces (for example, natural leather, plastic coating, rubberized surface).

The right to select the game ball is determined by lot before the game and replaced after each set. Increasingly, uniform balls are outlined and provided by the organizers to ensure equal opportunity for all teams participating at international championships.

In the field of youth other ball dimensions come (especially lower weights) are used, see the regulations.

The playing field is divided in half by a 5 cm wide ribbon-like red and white net. It is held above the center line between two posts, its upper edge is located at 2 m height (men) and 1.90 m (women). For the D-Youth (under 12), the height is 1.60 m, the C-youth (under 14 years) 1.80 m. The field also includes a run-off area, which when playing outdoors is 8 m to the rear and 6 m on the sides. For indoor play, run-off areas are limited by the wall or stands, but are generally a minimum of 1 m to the rear and 0.5 m at the sides.

When exactly the game of fistball was "invented", is not known. What is certain, however, is that the roots lie in the southern part of Europe, perhaps in Italy. The earliest known written mention of the game is by Roman Emperor Gordian III and dates to the year 240. Rules for an Italian version of fistball were recorded by Antonius Scaiono in 1555.

In the 16th century the game experienced a renaissance. However, it was seen less as a game of competitive nature and more as a pastime for nobles and gentry.

In 1786, Johann Wolfgang Goethe mentioned fistball games between 'four noblemen from Verona and four Venetians' in his diary An Italian Journey.

The development of fistball was halted by the Second World War. It was not until 1947 that regular German Championships were able to be carried out.

In 1894, Georg Weber, along with Dr. Heinrich Schnell, drafted the first German rules that outlined a sport with competitive elements. The play and scoring however differed significantly from fistball as it is known today.

Fistball was first introduced to the United States in 1911 by high school teacher Christopher Carlton who had experienced it first hand on a summer vacation to Italy.

The fist ball game is one of the oldest sports in the world, which is operated with great enthusiasm, especially in Europe, South America and Namibia, but also in North America and neürdings in Japan. The fist ball game in the year 240 AD was first mentioned. N. Of Gordianus, emperor of Rome. . In 1555, Antonio Scaino wrote the first rules for the Italian national sport, the "ball game" Johann Wolfgang von Goethe wrote in his diary in 1786 "Italian Journey": "four noble Veronese hit the ball against four Vicenter; they drove the otherwise among themselves the whole year, about two hours before night.

In 1870 that fistball was introduced to Germany, led by Georg Weber. The sport was mainly played by gymnasts and was soon seen as a gymnastic sport. Fistball was first presented in 1885 at the German Gymnastics Festival in Dresden

At the 1913 German Gymnastics Festival in Leipzig, the first German men's championships were held, where LLB Frankfurt won against 1879 MTV Munich, winning 114:101. Due to the First World War, no German Championships were held between 1914 to 1920. In 1921, the first women's fistball championship was held, with Hamburger Turnerschaft emerging victorious against TV Krefeld, winning 91:90. Fistball, while still a game affiliated to the Gymnastics Association, began to grow independently. In 1927, almost 12,000 teams played organized fistball in Germany.

The International Fistball Association (IFA) was founded in 1960, and is now the umbrella organization of all national fistball organizations worldwide.

A relative latecomer to fistball, Australia established their own fistball federation in 2013.

The International Fistball Association (IFA) is a dynamic, modern and efficient sports federation and continues with its member associations for the following values: .

• We contribute with a targeted diversity account the promotion and development of the sport worldwide.

• We practice a level-appropriate, open and professional communication both externally and internally.

• Appropriate measures and cooperation with sports, politics, business and the media will be perceived the sport fistball in society.

• We foster cooperation with international institutions such as the International Olympic Committee (IOC), SportAccord, the International World Games Association (IGWA), the Fédération Internationale du Sport Universitaire (FISU), the World Anti-Doping Agency (WADA) and other associations and develop them in a constructive dialogue.

• Equality of opportunity and equality are important to us. Gender and protection from discrimination of any kind are executive functions.

• We are an attractive and competent partner for sponsors.

• We encourage fair play at each stage.

• We fully support the actions of WADA and contact us against any doping abuse. • We are solution oriented and ensure efficient use of resources. Pragmatic approaches are the focus. 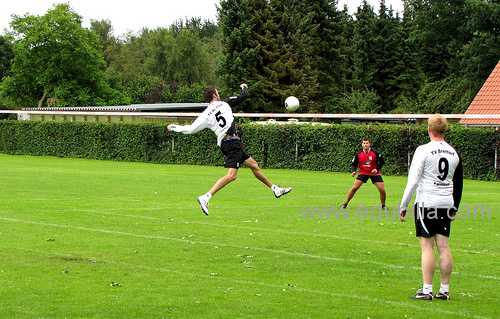 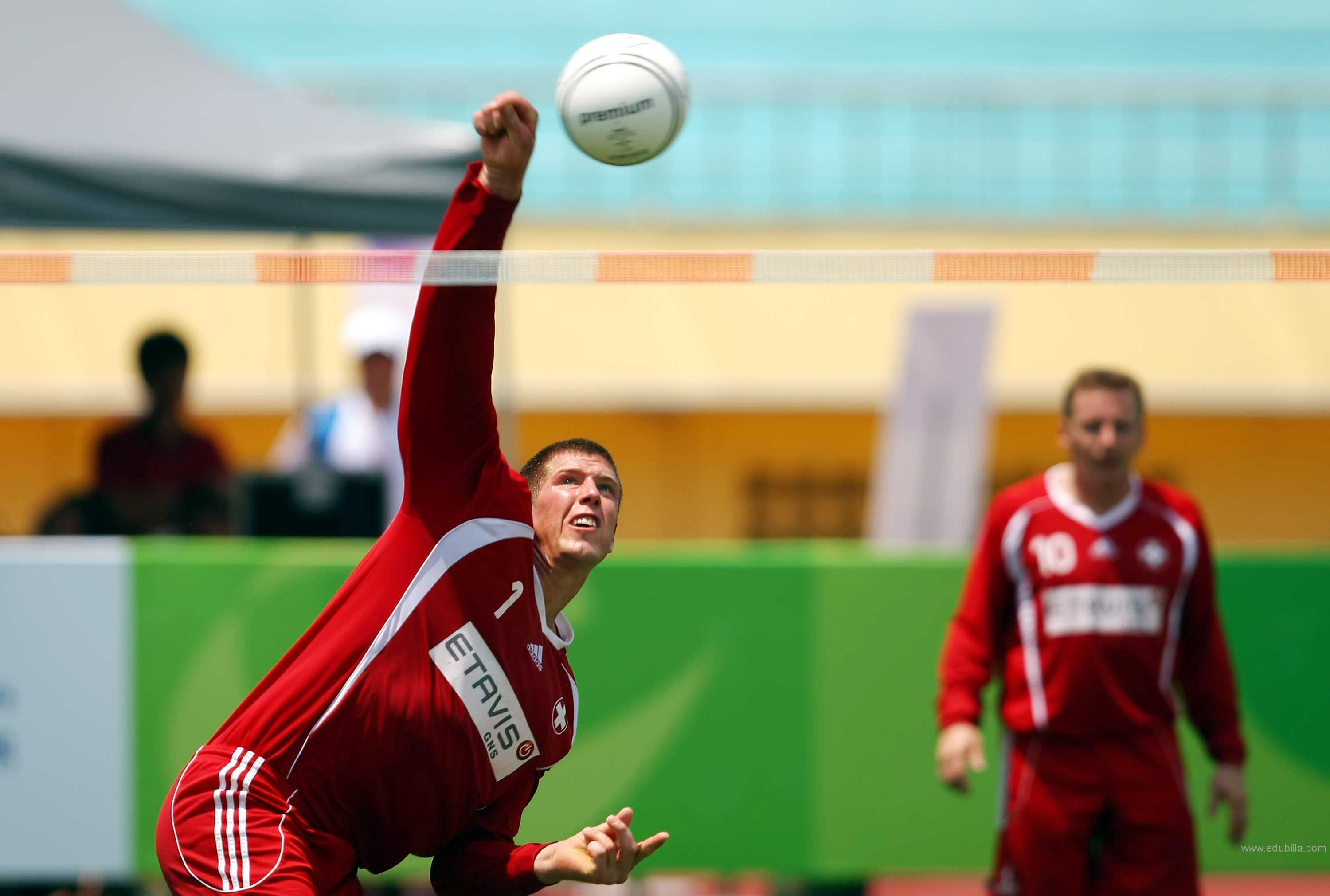 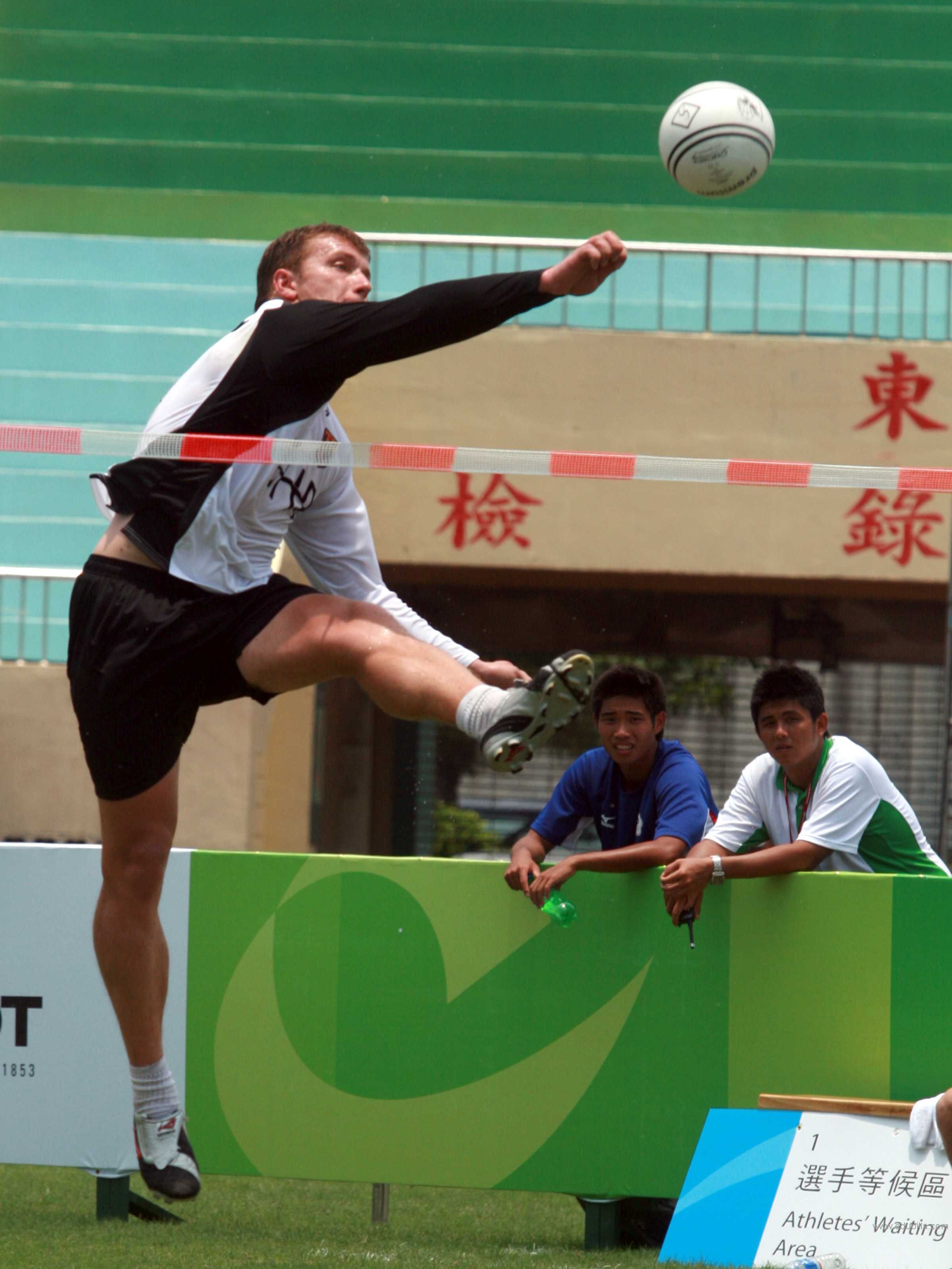 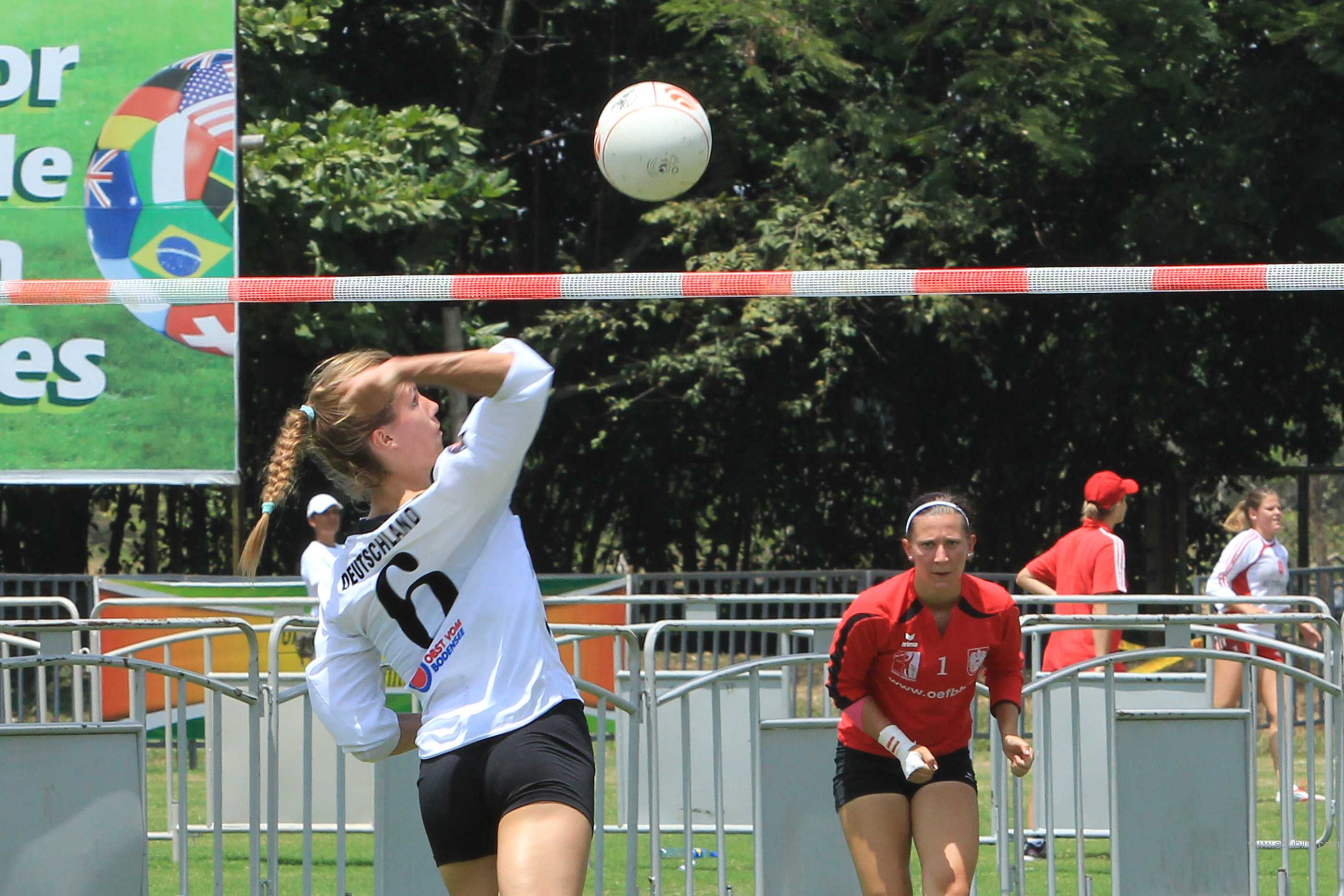 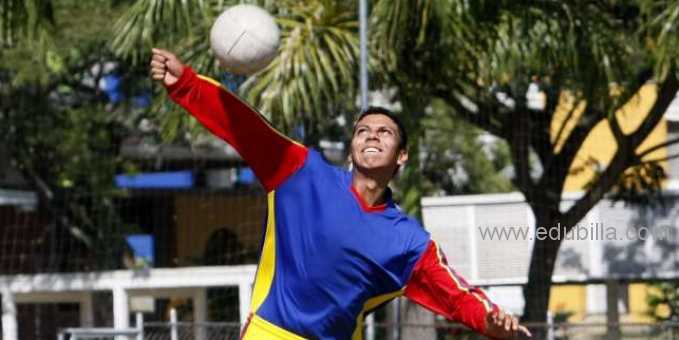 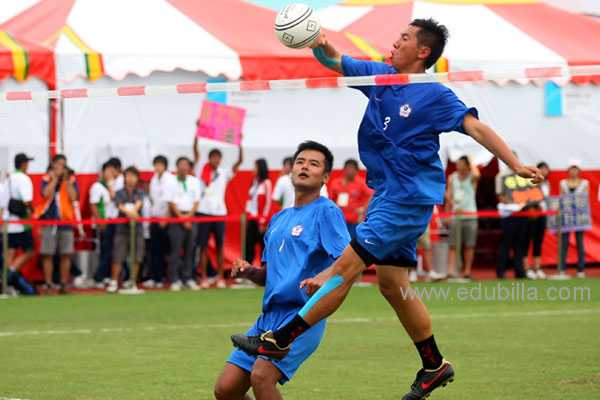