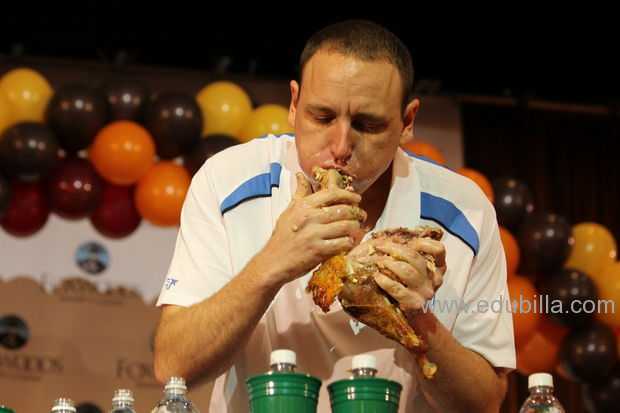 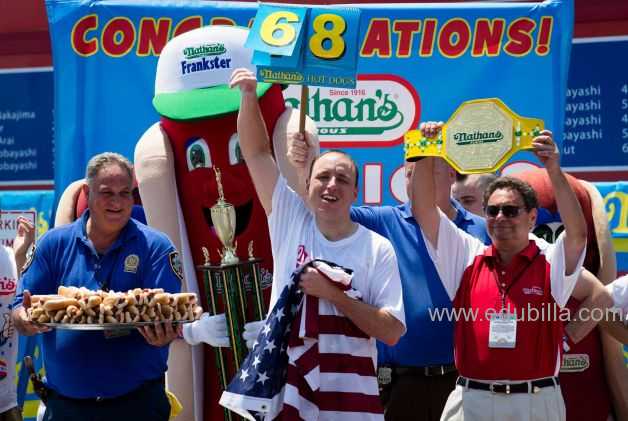 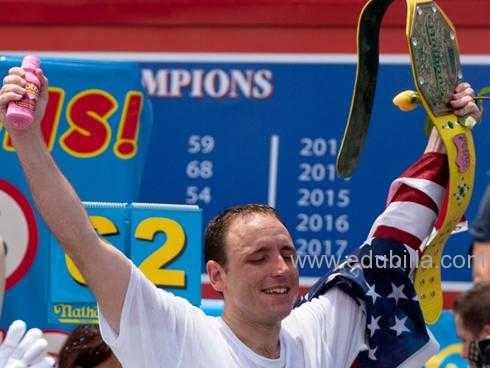 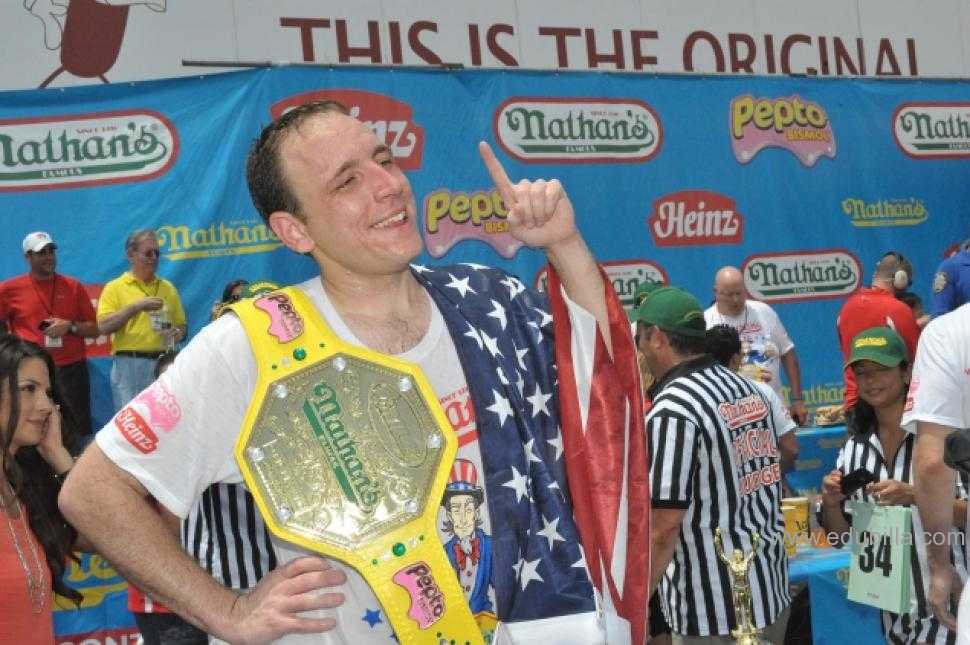 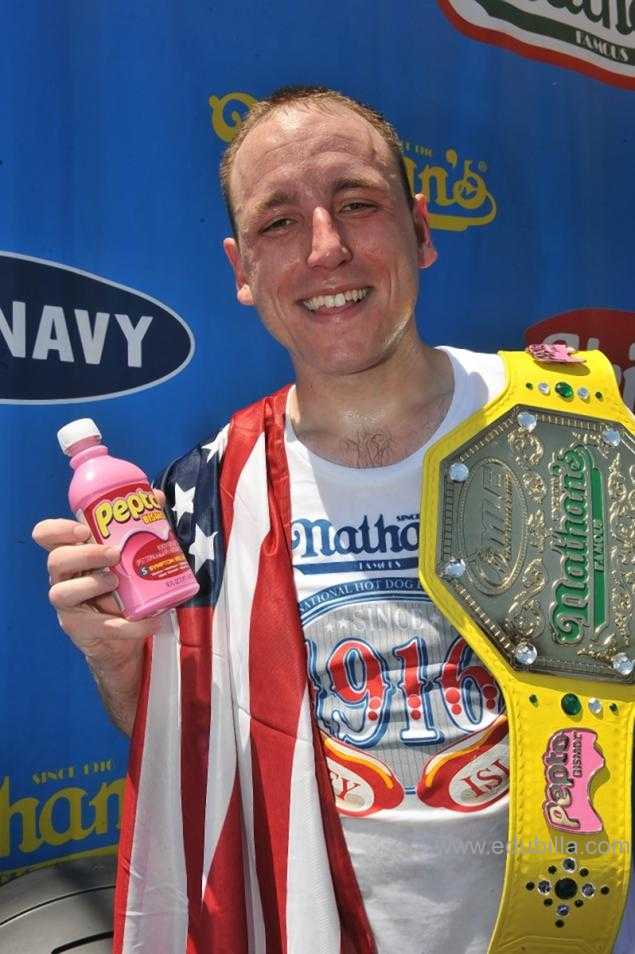 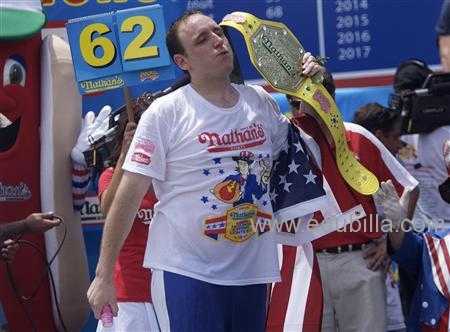 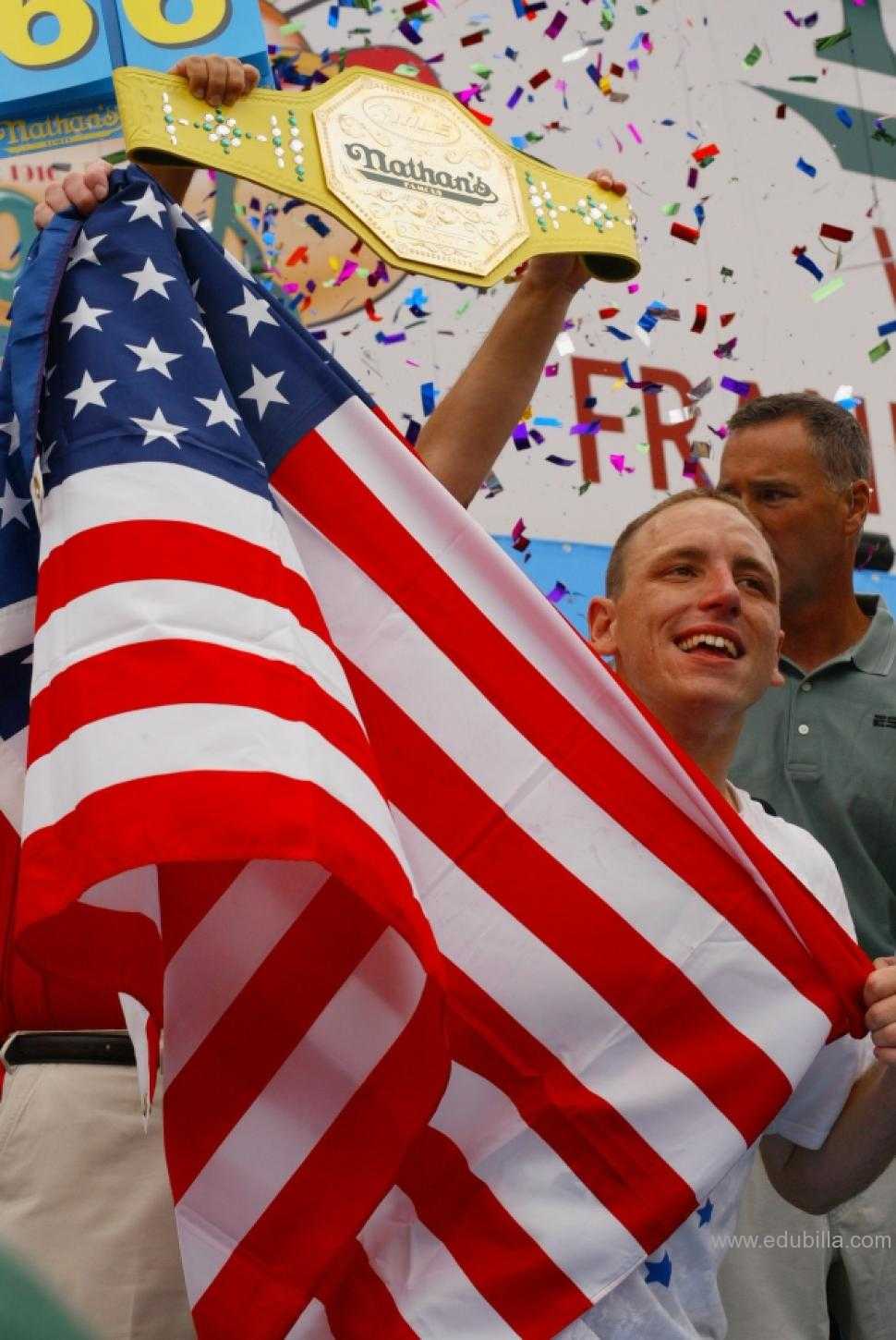 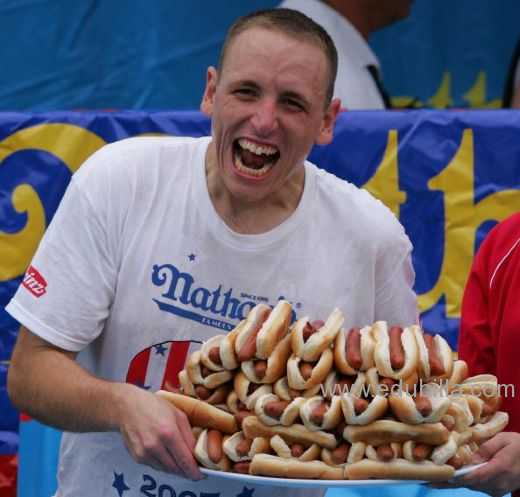 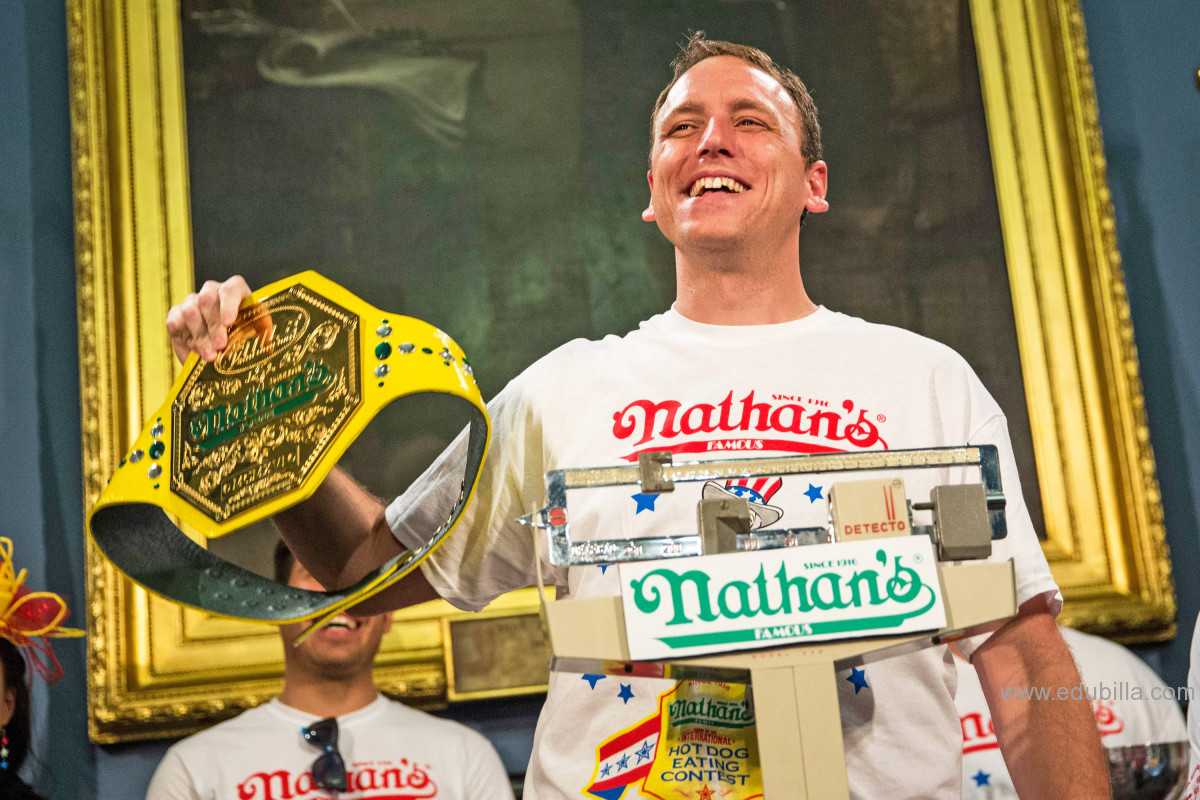 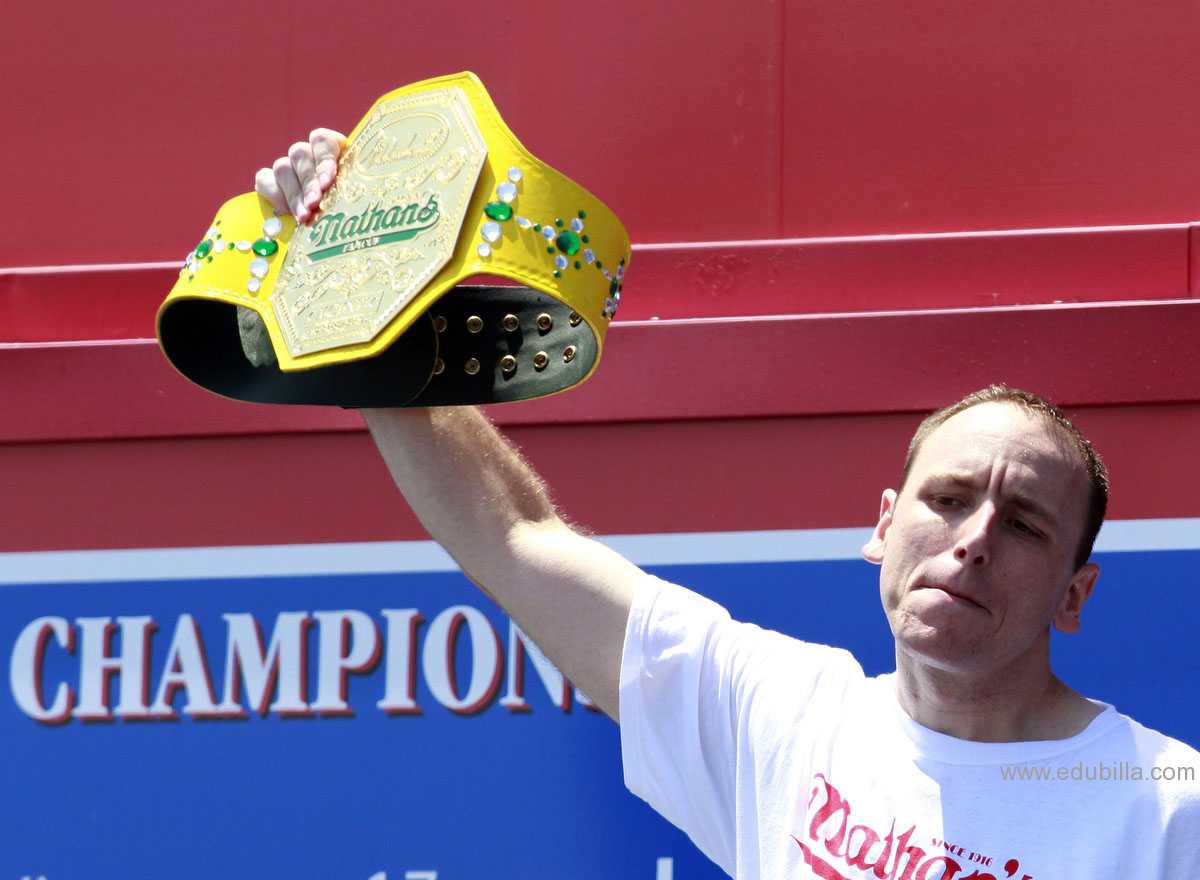 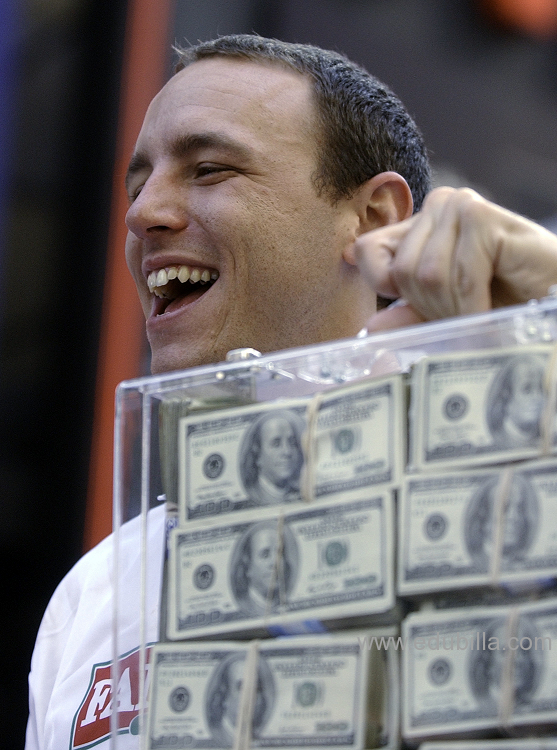 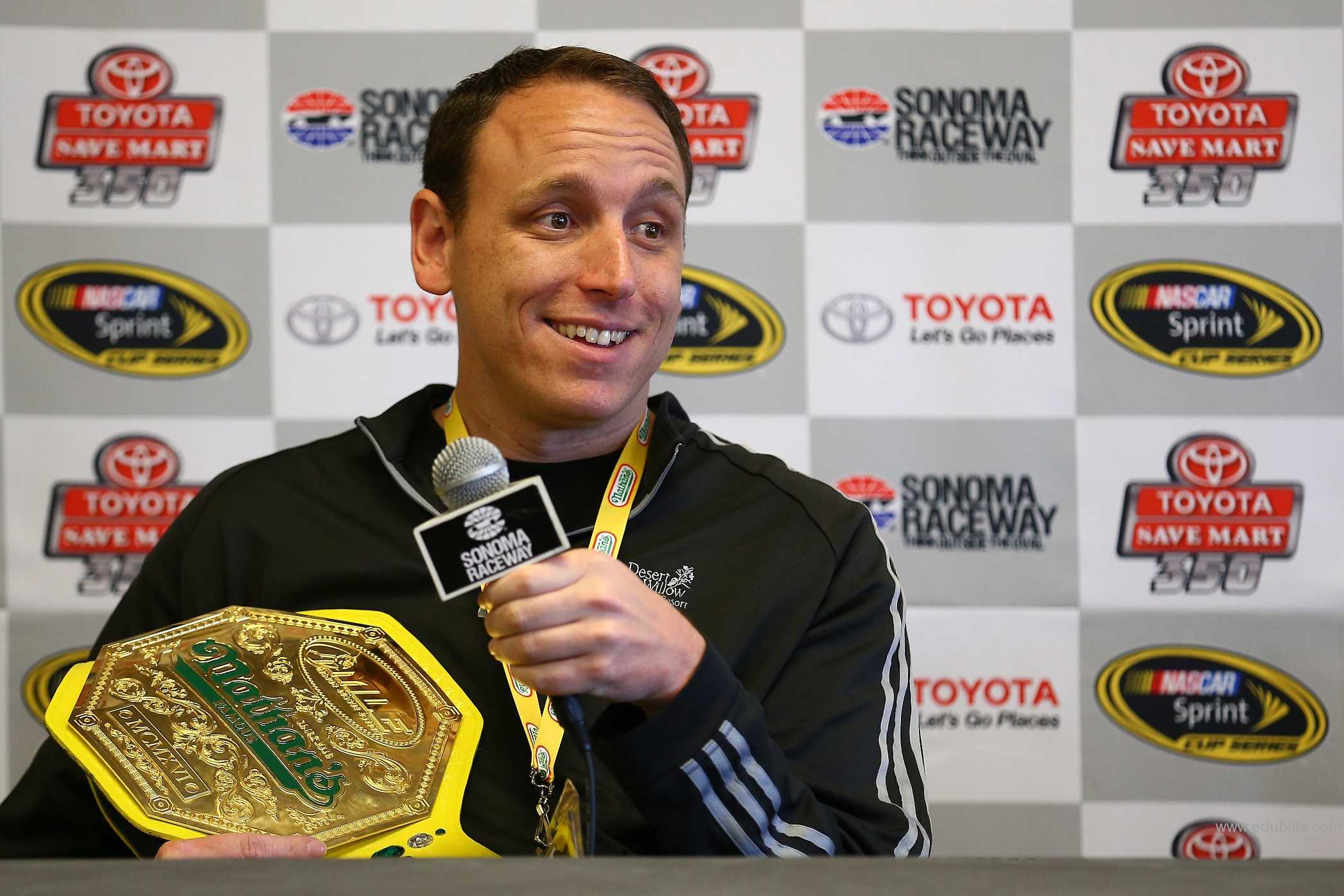 Chestnut trains by fasting and by stretching his stomach with milk, water and protein supplements.Since the start of his competitive eating career, his competition weight has varied from 225–240 pounds (102–109 kg). Although this is in dispute. Footage from the 9th Annual World Gyoza Eating Contest 2015 clearly shows Chestnut in excess of 240lbs. After winning his sixth consecutive hot dog eating contest in 2012 by eating 68 hot dogs, he stated, ?I will not stop until I reach 70. This 'sport' isn't about eating. It's about drive and dedication, and at the end of the day hot dog eating challenges both my body and my mind.?

Chestnut, a San Jose State University student, entered the competitive eating scene in 2005 with a break-out performance in the deep-fried asparagus eating championship, in which he beat high-ranked eater Rich LeFevre by eating 6.3 pounds of asparagus in 11.5 minutes. That same year, during Nathan's Famous Fourth of July International Hot Dog Eating Contest, he downed 32 dogs, placing third behind Takeru Kobayashi and Sonya Thomas.

Chestnut qualified for the 2006 Nathan's Contest by eating 50 hot dogs with buns (HDB). As July 4 approached, there was speculation that 2006 might be the year when Kobayashi would be beaten.It was not to be, however. Although Chestnut turned in a great performance, leading Takeru Kobayashi through most of the contest, the final tally put Chestnut at 52 and Kobayashi at 53 3/4 (a new world record). Chestnut lost to Kobayashi in the Johnsonville World Bratwurst Eating Championship in Sheboygan, Wisconsin. He ate 41 bratwurst sausages in 10 minutes. Kobayashi ate 58.

On July 4, 2011, Chestnut secured his fifth straight Nathan's Hotdog Eating Contest, by consuming 62 HDB. Kobayashi, who could not participate in the contest because of his refusal to sign the required contract, ate 69 HDB at an off-site event with independent judges to establish a new world record.

On July 4, 2014, Chestnut ate more hot dogs than any of his opponents, narrowly defeating competitor Matt Stonie. He successfully ate 61 hot dogs to Stonie's 56, making this his 8th consecutive win. Prior to the event, Chestnut proposed to his longtime girlfriend, Neslie Ricasa.

On July 4, 2015, Chestnut was defeated by Stonie. He successfully ate 60 hot dogs, but Stonie improved since 2014 and consumed 62 hot dogs, ending Chestnut's eight-year run as champion.