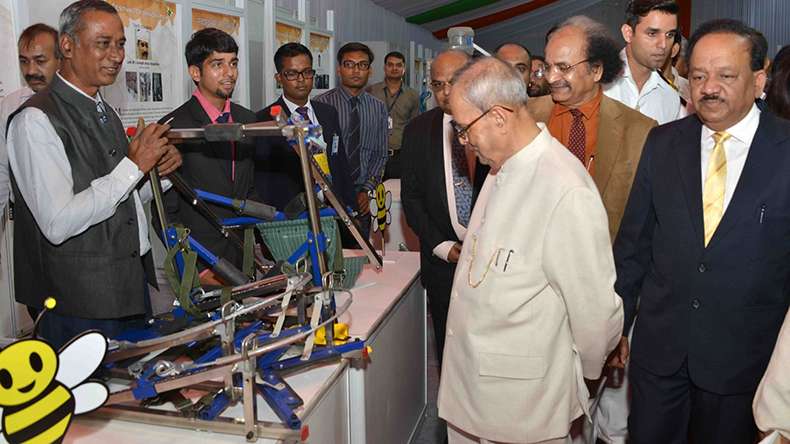 President Pranab Mukherjee inaugurated the"Festival of Innovation" at Rashtrapati Bhavan. The main aim of the event is to boost the grassroot-level innovations across the country. The festival is being celebrated from March 12 to 19 in collaboration with the National Innovation Foundation (NIF). The festival was kicked off with the inauguration of an "Exhibition of Innovations" at the world-famous Mughal Gardens that will remain open to the public till March 19.

"Innovation is an idea whose time has come. The budget for this festival has gone up 600 percent as compared to last year," Ashutosh Sharma, secretary, Department of Science & Technology, told media persons. "Our idea is to reach out to the students from class 6 to 12 for innovative ideas across the country. From there, one lakh ideas will be selected and each of them will be given Rs.5,000 to convert the idea into an innovation," he added.

Besides the above, the festival will have three exhibitions, two workshops, four group discussions, two award presentation ceremonies and roundtable on different topics during the week. Some highlights of the festival are a keynote address by Nobel laureate Kailash Satyarthi on March 13 and presentation of Visitor's Award on March 14. The NIF, set up in 2000 by the Department of Science and Technology, has taken major initiatives to serve the knowledge-rich, economically poor people of the country.