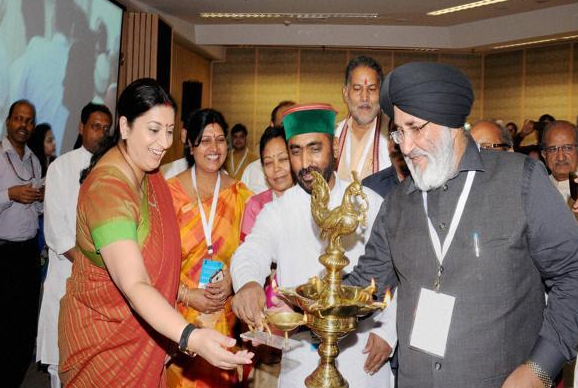 The HRD Minister Smriti Irani said many people feel nothing is right in the education sector, but it is the responsibility of those holding a position to send a message that solutions are possible in specific time-frame.

Launching a teachers education portal for District Institutes of Education and Training (DIETs) - Prashikshak, she said the field of education, which many look at with much expectation, is full of challenges.

"When education is discussed in the country, an atmosphere lacking in enthusiasm prevails. Same words that nothing is right are there on everyones lips," she said.

Referring to state ministers and officials present at the event, Irani said, "The responsibility to send a message that solutions are possible in a specific time-frame lies on them and us."

Irani said that while central grants for teacher education were being provided since 1987 but there was no national mechanism to determine their quality. She said that a report of National Council for Teacher Education (NCTE) had sought a mechanism in this regard, and Prashikshak portal gives a benchmark for quality.

She said the portal will provide benchmarks and other vital data related to teachers, vacancies and education which will help the Centre as well as the states.

Referring to Minister of State for HRD Upendra Kushwahas remarks that often there are gaps between the ground reality and data, Irani said it is true and a result of inadequate monitoring.

Irani said the newly-launched portal would initially contain data on DIETs but soon include other teachers training institutes in the country.Irani also suggested that feedback from parents and local people should be used to decide national awards for teachers.