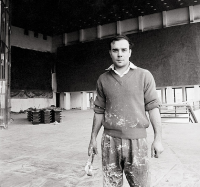 Yves Klein was born on April 28 in Nice, on rue Verdi, in the home of his maternal grandparents. His father, Fred Klein, Dutch of Indonesian extraction, was a figurative painter. His mother, nee Marie Raymond from an Alpes-Maritimes family, was a well-known abstract painter.

Early Life and his Studies

Klein was born in Nice, in the Alpes-Maritimes department of France. His parents, Fred Klein and Marie Raymond, were both painters. His father painted in a loose Post-Impressionist style, while his mother was a leading figure in Art informel, and held regular soirees with other leading practitioners of this Parisian abstract movement.

From 1942 to 1946, Klein studied at the Ecole Nationale de la Marine Marchande and the Ecole Nationale des Langues Orientales and began practicing judo. At this time, he became friends with Arman (Armand Fernandez) and Claude Pascal and started to paint. At the age of nineteen, Klein and his friends lay on a beach in the south of France, and divided the world between themselves; Arman chose the earth, Pascal, words, while Klein chose the ethereal space surrounding the planet, which he then proceeded to sign.

International Klein Blue (IKB) was developed by Yves Klein in collaboration with Edouard Adam, a Parisian art paint supplier whose shop is still in business on the Boulevard Edgar-Quinet in Montparnasse. The uniqueness of IKB does not derive from the ultramarine pigment, but rather from the matte, synthetic resin binder in which the color is suspended, and which allows the pigment to maintain as much of its original qualities and intensity of color as possible.The synthetic resin used in the binder is a polyvinyl acetate developed and marketed at the time under the name Rhodopas M or M60A by the French pharmaceutical company Rhône Poulenc.Adam still sells the binder under the name "Medium Adam 25."

In May 1960, Klein deposited a Soleau envelope, registering the paint formula under the name International Klein Blue (IKB) at the Institut national de la propriété industrielle (INPI),but he never patented IKB. Only valid under French law, a soleau enveloppe merely registers the date of invention, according to the depositor, prior to any legal patent application. The copy held by the INPI was destroyed in 1965. Klein's own copy, which the INPI returned to him duly stamped is still extant.

In March 1960, Klein patented a method by which he was able to distance himself from the physical creation of his paintings by remotely directing models covered in the color. 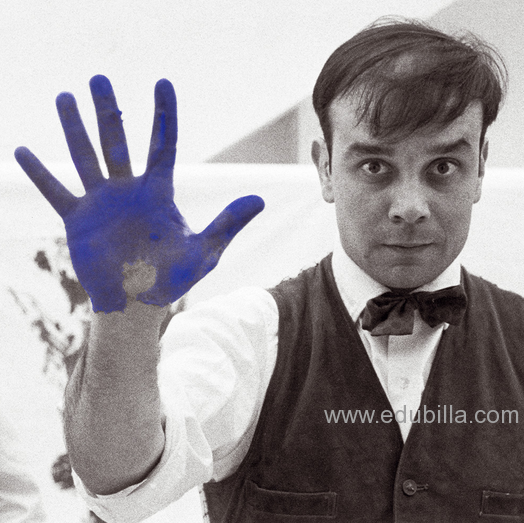