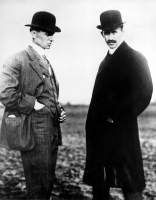 The Wright brothers, Orville and Wilbur, were two American brothers, inventors, and aviation pioneers who are credited with inventing and building the world's first successful airplane and making the first controlled, powered and sustained heavier-than-air human flight, on December 17, 1903. From 1905 to 1907, the brothers developed their flying machine into the first practical fixed-wing aircraft. Although not the first to build and fly experimental aircraft, the Wright brothers were the first to invent aircraft controls that made fixed-wing powered flight possible.

The brothers' fundamental breakthrough was their invention of three-axis control, which enabled the pilot to steer the aircraft effectively and to maintain its equilibrium.This method became and remains standard on fixed-wing aircraft of all kinds.From the beginning of their aeronautical work, the Wright brothers focused on developing a reliable method of pilot control as the key to solving "the flying problem". This approach differed significantly from other experimenters of the time who put more emphasis on developing powerful engines.Using a small homebuilt wind tunnel, the Wrights also collected more accurate data than any before, enabling them to design and build wings and propellers that were more efficient than any before.Their first U.S. patent, 821,393, did not claim invention of a flying machine, but rather, the invention of a system of aerodynamic control that manipulated a flying machine's surfaces.

They gained the mechanical skills essential for their success by working for years in their shop with printing presses, bicycles, motors, and other machinery. Their work with bicycles in particular influenced their belief that an unstable vehicle like a flying machine could be controlled and balanced with practice.From 1900 until their first powered flights in late 1903, they conducted extensive glider tests that also developed their skills as pilots. Their bicycle shop employee Charlie Taylor became an important part of the team, building their first airplane engine in close collaboration with the brothers.

The Wright brothers' status as inventors of the airplane has been subject to counter-claims by various parties. Much controversy persists over the many competing claims of early aviators.

In 1878 their father, who traveled often as a bishop in the Church of the United Brethren in Christ, brought home a toy "helicopter" for his two younger sons. The device was based on an invention of French aeronautical pioneer Alphonse Pénaud. Made of paper, bamboo and cork with a rubber band to twirl its rotor, it was about a foot long. Wilbur and Orville played with it until it broke, and then built their own.In later years, they pointed to their experience with the toy as the initial spark of their interest in flying.

The Wrights based the design of their kite and full-size gliders on work done in the 1890s by other aviation pioneers. They adopted the basic design of the Chanute-Herring biplane hang glider ("double-decker" as the Wrights called it), which flew well in the 1896 experiments near Chicago, and used aeronautical data on lift that Lilienthal had published. The Wrights designed the wings with camber, a curvature of the top surface. The brothers did not discover this principle, but took advantage of it. The better lift of a cambered surface compared to a flat one was first discussed scientifically by Sir George Cayley. Lilienthal, whose work the Wrights carefully studied, used cambered wings in his gliders, proving in flight the advantage over flat surfaces. The wooden uprights between the wings of the Wright glider were braced by wires in their own version of Chanute's modified Pratt truss, a bridge-building design he used for his biplane glider (initially built as a triplane). The Wrights mounted the horizontal elevator in front of the wings rather than behind, apparently believing this feature would help to avoid, or protect them, from a nosedive and crash like the one that killed Lilienthal.Wilbur incorrectly believed a tail was not necessary,and their first two gliders did not have one. According to some Wright biographers, Wilbur probably did all the gliding until 1902, perhaps to exercise his authority as older brother and to protect Orville from harm as he did not want to have to explain to Bishop Wright if Orville got injured.

In camp at Kill Devil Hills, they endured weeks of delays caused by broken propeller shafts during engine tests. After the shafts were replaced (requiring two trips back to Dayton), Wilbur won a coin toss and made a three-second flight attempt on December 14, 1903, stalling after takeoff and causing minor damage to the Flyer. (Because December 13, 1903, was a Sunday, the brothers did not make any attempts that day, even though the weather was good.) In a message to their family, Wilbur referred to the trial as having "only partial success", stating "the power is ample, and but for a trifling error due to lack of experience with this machine and this method of starting, the machine would undoubtedly have flown beautifully."Following repairs, the Wrights finally took to the air on December 17, 1903, making two flights each from level ground into a freezing headwind gusting to 27 miles per hour (43 km/h). The first flight, by Orville at 10:35 am, of 120 feet (37 m) in 12 seconds, at a speed of only 6.8 miles per hour (10.9 km/h) over the ground, was recorded in a famous photograph.[34] The next two flights covered approximately 175 and 200 feet (53 and 61 m), by Wilbur and Orville respectively. Their altitude was about 10 feet (3.0 m) above the ground.

Wilbur started the fourth and last flight at just about 12 o'clock. The first few hundred feet were up and down, as before, but by the time three hundred ft had been covered, the machine was under much better control. The course for the next four or five hundred feet had but little undulation. However, when out about eight hundred feet the machine began pitching again, and, in one of its darts downward, struck the ground. The distance over the ground was measured to be 852 feet; the time of the flight was 59 seconds. The frame supporting the front rudder was badly broken, but the main part of the machine was not injured at all. We estimated that the machine could be put in condition for flight again in about a day or two.

Five people witnessed the flights: Adam Etheridge, John T. Daniels (who snapped the famous "first flight" photo using Orville's pre-positioned camera) and Will Dough, all of the U.S. government coastal lifesaving crew; area businessman W.C. Brinkley; and Johnny Moore, a teenaged boy who lived in the area. After the men hauled the Flyer back from its fourth flight, a powerful gust of wind flipped it over several times, despite the crew's attempt to hold it down. Severely damaged, the airplane never flew again.The brothers shipped it home, and years later Orville restored it, lending it to several U.S. locations for display, then to a British museum, before it was finally installed in the Smithsonian Institution in Washington, D.C. in 1948, its current residence.

The Wrights sent a telegram about the flights to their father, requesting that he "inform press."However, the Dayton Journal refused to publish the story, saying the flights were too short to be important. Meanwhile, against the brothers' wishes, a telegraph operator leaked their message to a Virginia newspaper, which concocted a highly inaccurate news article that was reprinted the next day in several newspapers elsewhere, including Dayton.

The Wrights issued their own factual statement to the press in January.Nevertheless, the flights did not create public excitement—if people even knew about them—and the news soon faded.In Paris, however, Aero Club of France members, already stimulated by Chanute's reports of Wright gliding successes, took the news more seriously and increased their efforts to catch up to the brothers.

Modern analysis by Professor Fred E. C. Culick and Henry R. Jex (in 1985) has demonstrated that the 1903 Wright Flyer was so unstable as to be almost unmanageable by anyone but the Wrights, who had trained themselves in the 1902 glider.

After the Wrights had returned home from a triumphant tour of Europe, they were awarded this medal during the Wright Brothers' Home Days Celebration on June 17 and 18, 1909. They also received gold medals from the State of Ohio and the City of Dayton.

On December 31, 1908, Wilbur Wright set a world's record flying for 2 hours and 18 minutes, traveling 77 miles (123 kilometers) at Avours, France. For this the Aero Club of France awarded him the Michelin Cup and 20,000 francs.

Wilbur and Orville Wright received the newly created "Langley Medal" for their aeronautical achievements from President Howard Taft at the White House in Washington, DC.

Created by Napoleon Bonaparte, the French Legion of Honor is an order of merit given to individuals without regard to birth or religion, provided they swear to uphold the values of liberty and equality. Orville, Wilbur, and Katharine Wright were so honored after their successful aviation demonstrations in 1908 and 1909.

Established in 1911 by Robert Collier, the Collier Trophy was presented annually for the most significant contribution to aeronautics. Glenn Curtiss won the trophy for the years 1911 and 1912, and Orville Wright won it for 1913 for the Wrights' automatic stabilization system, the forerunner of the automatic pilot. 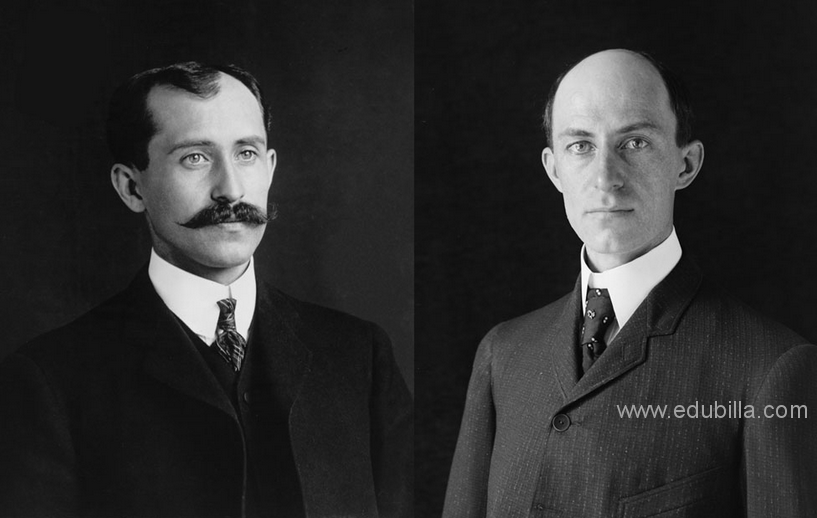 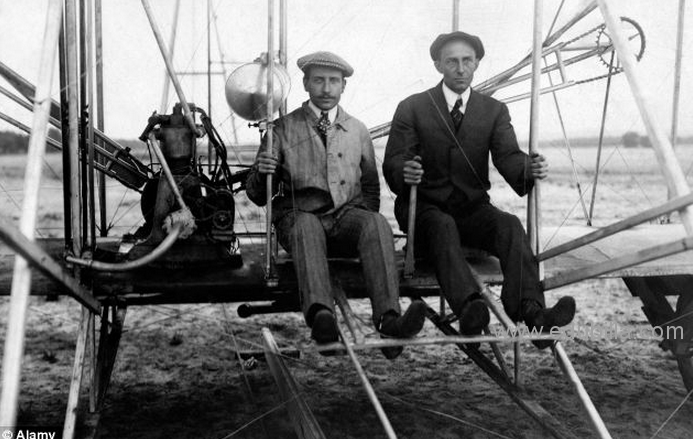