Sir William Crookes, OM, FRS (17 June 1832 – 4 April 1919) was a British chemist and physicist who attended the Royal College of Chemistry, London, and worked on spectroscopy. He was a pioneer of vacuum tubes, inventing the Crookes tube. Crookes was the inventor of the Crookes radiometer,which today is made and sold as a novelty item.

Crookes made a career of being a meteorologist and lecturer at multiple places. Crookes worked in both the fields of chemistry and physics. The salient characteristic of his work was the originality of the conception of his experiments, and his skill in their execution. His interests, ranging over pure and applied science, economic and practical problems, and psychiatrical research, made him a well-known personality, and he received many public and academic honors. Crookes's life was one of unbroken scientific activity.

William Crookes (also known as Sir William Crookes) was born in London, the eldest son of 16. His father Joseph Crookes, was a tailor of north-country origin, living with his second wife, Mary Scott Lewis Rutherford Johnson.

From 1850 to 1854 he filled the position of assistant in the college, and soon embarked upon original work, not in organic chemistry where the inspiration of his teacher, August Wilhelm von Hofmann, might have been expected to lead him, but on new compounds of selenium. These formed the subject of his first published papers in 1851. He worked at the department at the Radcliffe Observatory in Oxford in 1854, and in 1855 was appointed lecturer in chemistry at the Chester Diocesan Training College. In 1856 he married Ellen, daughter of William Humphrey, of Darlington, by whom he fathered three sons and a daughter. Married and living in London, he was devoted mainly to independent work. In 1859, he founded the Chemical News, a science magazine which he edited for many years and conducted on much less formal lines than his usual with journals of scientific societies.

In 1861, Crookes discovered a previously unknown element with a bright green emission line in its spectrum and named the element thallium, from the Greek thallos, a green shoot. Crookes wrote a standard treatise on Select Methods in Chemical Analysis in 1871. Crookes was effective in experimentation. The method of spectral analysis, introduced by Bunsen and Kirchhoff, was received by Crookes with great enthusiasm and to great effect. His first important discovery was that of the element thallium, announced in 1861, and made with the help of spectroscopy. By this work his reputation became firmly established, and he was elected a fellow of the Royal Society in 1863.

He developed the Crookes tubes,investigating cathode rays. He published numerous papers on spectroscopy and conducted research on a variety of minor subjects. In his investigations of the conduction of electricity in low pressure gases, he discovered that as the pressure was lowered, the negative electrode (cathode) appeared to emit rays (the so-called "cathode rays", now known to be a stream of free electrons, and used in cathode ray display devices). As these examples indicate, he was a pioneer in the construction and use of vacuum tubes for the study of physical phenomena.He was, as a consequence, one of the first scientists to investigate what are now called plasmas and identified it as the fourth state of matter in 1879.He also devised one of the first instruments for the study of nuclear radioactivity, the spinthariscope.

Crookes investigated the properties of cathode rays, showing that they travel in straight lines, cause fluorescence in objects upon which they impinge, and by their impact produce great heat. He believed that he had discovered a fourth state of matter, which he called "radiant matter",but his theoretical views on the nature of "radiant matter" were to be superseded.He believed the rays to consist of streams of particles of ordinary molecular magnitude. It remained for Sir J. J. Thomson to expound on the subatomic nature of cathode rays (consisting of streams of negative electrons). Nevertheless, Crookes's experimental work in this field was the foundation of discoveries which eventually changed the whole of chemistry and physics.

Crookes' attention had been attracted to the vacuum balance in the course of thallium research. He soon discovered the phenomenon upon which depends the action of the Crookes radiometer, in which a system of vanes, each blackened on one side and polished on the other, is set in rotation when exposed to radiant energy. Crookes did not, however, provide the true explanation of this apparent "attraction and repulsion resulting from radiation".

After 1880, he lived at 7 Kensington Park Gardens, where all his later work was carried out in his private laboratory.

Crookes identified the first known sample of helium, in 1895. Crookes was knighted in 1897.

In 1903, Crookes turned his attention to the newly discovered phenomenon of radioactivity, achieving the separation from uranium of its active transformation product, uranium-X (later established to be protactinium). Crookes observed the gradual decay of the separated transformation product, and the simultaneous reproduction of a fresh supply in the original uranium. At about the same time as this important discovery, he observed that when "p-particles", ejected from radio-active substances, impinge upon zinc sulfide, each impact is accompanied by a minute scintillation, an observation which forms the basis of one of the most useful methods in the technique of radioactivity.

Crookes wrote a small book on diamonds in 1909. In 1910, Crookes received the Order of Merit. He died in London on 4 April 1919, two years after his wife. He is buried in London's Brompton Cemetery. 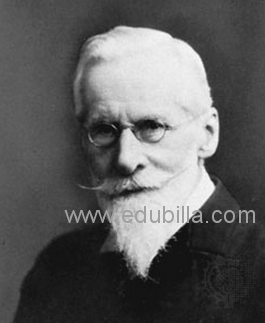 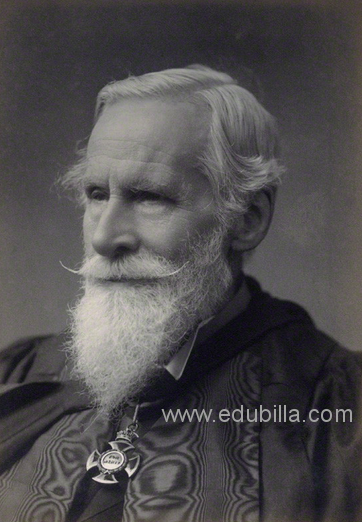