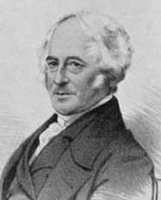 Thomas Hancock,English inventor and manufacturer who founded the British rubber industry. His chief invention, the “masticator,” worked rubber scraps into a shredded mass of rubber that could be formed into blocks or rolled into sheets. This process, perfected in 1821, led to a partnership with the Scottish chemist and inventor of waterproof fabrics, Charles Macintosh. The best known of the waterproofed articles they produced were macintosh coats, popularly known as mackintoshes.

Hancock's interest in rubber seems to have sprung from a desire to make waterproof fabrics to protect the passengers on his coaches. By 1819 he had begun to experiment with making rubber solutions. In 1820 he patented fastenings for gloves, suspenders, shoes and stockings; in the process of creating these early elastic fabrics, Hancock found himself wasting large amounts of rubber. He invented a machine to shred the waste rubber, his "Pickling machine" (or "masticator" as it is now known). He called it by the deceptive name of "Pickling" because he initially chose not to patent it, instead preferring to rely on secrecy.

In 1820, Hancock rented a factory in Goswell Road, London, where he worked raw rubber with the machines he had invented. His machines produced a warm mass of homogeneous rubber that could then be shaped and mixed with other materials, and was more easily dissolved than raw rubber. The prototype of his masticator was operated by one man and could only hold 3 oz (85 g); it was a wooden machine with a hollow cylinder studded with metal "teeth", with an inner studded core that was hand-cranked. By 1821 he had produced a two-man machine that held 1 lb (0.45 kg), and by 1841, he had created a machine that could process up to 200 lb (91 kg) of rubber at a time.

Hancock experimented with rubber solutions and in 1825 patented a process of making artificial leather using rubber solution and a variety of fibres. His choice of solvents, coal oil and turpentine, was probably influenced by Charles Macintosh's 1823 patent. In the same year he began working with Macintosh to manufacture his "double textured" fabric.

By 1830 it was obvious to everyone concerned that Hancock's leather solution, prepared with his masticated rubber, was better than Macintosh's. The two inventors merged their companies and began more fully co-operating, constructing, for example, an automatic spreading machine to replace the paint brushes previously used by Macintosh.

In 1834, Hancock's London factory burned down and Macintosh had already closed his Glasgow factory. The work was moved to Manchester where, in 1838, another fire destroyed that factory. A new factory was soon built and business continued as before, even though Macintosh's 1823 patent had expired in 1837. It was only in 1837 that Hancock finally patented both his masticator and spreader.

Although the Mackintosh style of coat has become generic (abbreviated as mac or mack), the company that Macintosh and Hancock established lives on as Mackintosh and continues to make rubberised Mackintosh coats using the same techniques and procedures pioneered by the two inventors.