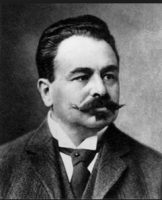 Ludwig Hatschek (1856 - 1914) began manufacturing asbestos board and asbestos gaskets (asbestos) in Vöcklabruck. In order to make the asbestos board hard so it can be used to produce panels, Hatschek experimented with various binding agents.

The addition of Portland cement in 1900 led to the sought-after achievement. For the new material, Ludwig Hatschek chose the name Eternit, a neologism referring to the Latin word aeternus = eternal, everlasting.

And so asbestos cement began its triumphant march over the roofs of the world. It was registered as Austrian Patent Number 5970.

The preferred application range was large and small panels, for roof coverings and panelling as well as for corrugated sheet. Later Eternit was also made into tubing. Over the years the material was developed further.

Today Eternit is a composite, that uses cement as the primary ingredient to which various fibers, water, pigment and aggregates are added. On the so-called Hatschek machine, this mixture is then wound in several layers of felt on the roll forming machine to the desired panel thickness. The sliced layer is then cut up in the die cutting machine, the segments are stacked on top of one another on steel plates and then compressed under high pressure. Eternit tiles feature exceptional characteristics, such as light weight, great durability, frost, heat and weathering resistance, inflammability and easy machinability.