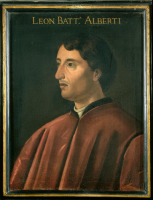 Leon Battista Alberti (1404-1472) was an Italian writer, humanist, and architect. Through his theoretical writings on painting, sculpture, and architecture, he raised them from the level of the mechanical arts to that of the liberal arts.

Leon Battista Alberti, as a scholar and philosopher who moved in humanist circles in Florence and the papal court in Rome, was involved in all the central concepts of the Renaissance. He was concerned with reforming his society and the arts in the image of ancient Roman culture. Throughout most of his writings the problem of man's relation to society is fundamental.

Leon Battista Alberti was born in Genoa on Feb. 14, 1404. He was the illegitimate son of Lorenzo Alberti, who belonged to one of the most prominent and oldest Florentine families but had been banished in 1401 from his native city. As a young boy, Leon Battista attended the famous school of the humanist Gasparino Barzizza in Padua, probably at the time Lorenzo Alberti was in Venice (1414). By 1421 Leon Battista was at the University of Bologna; while there he wrote a Latin comedy, Philodoxeus (ca. 1424). He received a degree in canon law prior to 1428, and it is probable that after earning his degree in Bologna he went to Rome. Sometime before 1431 Alberti was appointed prior of S. Martino in Gangalandi, Tuscany, which benefice he held until his death. In 1431 and early 1432 he accompanied Cardinal Albergati on a tour of northern Europe. On his return to Rome, Alberti became secretary to the patriarch of Grado and in October 1432 abbreviator at the papal court.

Soon after this Alberti wrote Descriptio urbis Romae as an index for an archeological map of Rome and in 3 months composed the first three books of Della famiglia, which is concerned with domestic life and the education of children. The fourth book of the treatise on the family, dealing with friendship, was written in Florence in 1437, and the entire work was revised in 1443. The sociological approach of this treatise remained central to his later writings.

In June 1434 Alberti accompanied the court of Pope Eugenius IV to Florence when it fled from the unrest in Rome. Florence, under the leadership of artists such as Donatello, Masaccio, and Filippo Brunelleschi, was then the art capital of Europe. Here Alberti composed his theoretical treatises on the visual arts. His treatise in Latin on painting, De pictura, was completed in 1435; the following year he prepared in Italian a briefer, more popular version, Della pittura. The Latin edition, dedicated to Gianfrancesco Gonzaga of Mantua, was written to persuade patrons that the art of painting was not merely a mechanical craft. The treatise explained for the first time in writing the mathematical foundations of one-point linear perspective as it was developed by the architect Brunelleschi, to whom the Italian version was dedicated; it also discussed antique themes and their appropriate expression. A Latin treatise on sculpture, De sculptura, may have originated at this time, although there is much uncertainty about its date.

As a member of the papal court, Alberti accompanied the Pope to Bologna in April 1436, and in January 1438 he was at Ferrara for the convocation of the council of the Latin and Greek churches. During this period Alberti wrote a work on law, De iure (1437), and another on the priest, Pontifex (1437). In 1442 Leonello d'Este, the ruler of Ferrara, recalled Alberti to advise him on a memorial equestrian statue of his father, Niccolo d'Este. Alberti's treatise on the horse, De equo animante, is related to this commission. His philosophical dialogue on peace of mind, Della tranquillità dell'animo, probably dates from the same period.

Alberti followed the papal court back to Rome in September 1443 and, probably at the instigation of Leonello d'Este, began to write the first five books of his important Latin treatise on architecture, De re aedificatoria. After Nicholas V was elected pope in 1447, Alberti finished the remaining five books, and the complete work was presented to the Pope in 1452 (first printed in 1485). The treatise not only relates architecture to the classical principles enunciated by the ancient Roman writer Vitruvius but, inspired by Alberti's previous concern for the family and society, studies architecture as a sociological phenomenon. For the remainder of his life, however, Alberti was more involved with the design and execution of architecture than with theoretical treatises.

The Rucellai Palace in Florence was begun by Alberti about 1447 and completed in 1451. The facade has three superimposed stories of classical pilasters. His first design for the facade was probably square and had a single entrance portal, but Bernardo Rossellino, who executed the building, lengthened the palace and constructed two portals, which contradicted Alberti's architectural principles.

In 1450 Sigismondo Malatesta commissioned Alberti to refurbish the Gothic church of S. Francesco at Rimini, later known as the Tempio Malatestiano. Alberti enclosed the exterior in a classical envelope of arcades at the sides and a triumphal arch motif on the facade. The great domed sanctuary, depicted in the foundation medal of 1450 and related, according to Alberti in a letter of 1454, to the Pantheon at Rome, was never executed, as the building was left incomplete at the death of Sigismondo in 1466.

In 1450, under the aegis of Pope Nicholas V, a great building program for the city of Rome was formulated, including additions to the Vatican Palace and the rebuilding of St. Peter's and the portion of the city near the Vatican called the Leonine Borgo. Except for some preliminary work at St. Peter's, this project was not carried out, but several features of the urban plan and of the palace additions suggest at least the counsel of Alberti.

Giovanni Rucellai, whose palace Alberti had designed, commissioned him in 1458 to complete the facade of the great Gothic church of S. Maria Novella in Florence. Limited by the medieval work of the lower part of the facade, Alberti created an ingenious compromise design in the classical mode that harmonized with the earlier portion. He also renovated the family chapel in S. Pancrazio for Rucellai and executed the Shrine of the Holy Sepulcher for the chapel in 1467.

In May 1459 Alberti followed Pope Pius II to Mantua. Probably at this time Lodovico Gonzaga of Mantua commissioned Alberti to build the church of S. Sebastiano, since its model was prepared by February 1460 and the foundation begun the following month. Alberti designed a centralized church plan with monumental entrance stairs leading up to a temple front facade; he altered the design of the facade in 1470, but it was never completed.

Late in 1464 Pope Paul II dismissed the papal abbreviators, including Alberti, which gave Alberti more time for his architectural commissions. For the church of S. Andrea in Mantua, he designed in 1470 a great Latin cross plan with transept and domed crossing; he described it as an "Etruscan temple." Construction began in 1472, the year of his death, and was continued until 1493 by Luca Fancelli, who supervised Alberti's Mantuan commissions. Only the nave flanked by chapels was executed in the 15th century; S. Andrea was finally completed in the 18th century.

Lodovico Gonzaga was the patron of the Church of S. Annunziata in Florence, and in 1470 he commissioned Alberti to revise Michelozzo's earlier plan for the rotunda of the church. At the same time Alberti wrote a treatise on morality, De iciarchia, lamenting the corruption of the times. In September 1471, he served as a guide to the antiquities of Rome, when Lorenzo de' Medici and the Florentine representatives came to pay homage to the newly elected pope, Sixtus IV. In 1472, probably early in April, Alberti died at Rome.

Of his architecture, the plan of S. Andrea, through its impact on Giacomo da Vignola's design for the Jesuit church, the Gesù, at Rome, was important for two centuries of church architecture. In the same way, the facade of S. Maria Novella, with its great scrolls, became the model for classicizing church facades, as seen also in the Gesù. In both his architecture and architectural theory Alberti paved the way for the High Renaissance architecture of Rome, exemplified in Donato Bramante's work of the early 16th century. 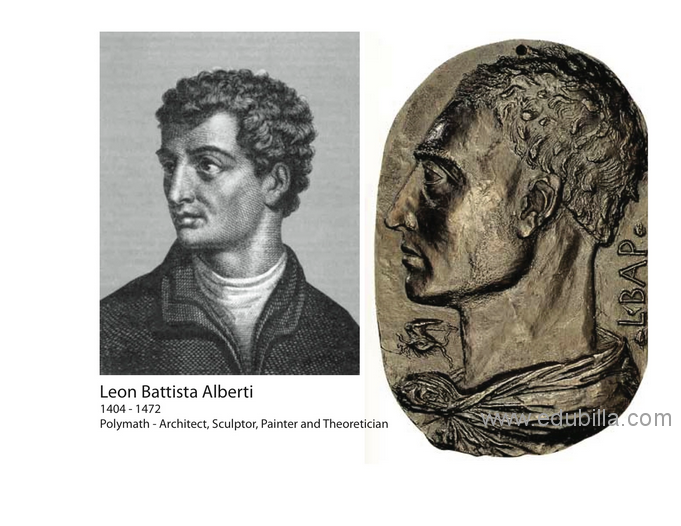