LaMarcus Adna Thompson (1848 – 1919) was an American inventor and businessman most famous for developing a variety of gravity rides.

La Marcus Edna Thompson became known as the "Father of Gravity" in 1884 when he built the world's first roller coaster, the Switchback Railway, in Coney Island. Thompson then founded an amusement empire called the L.A. Thompson Scenic Railway Company, which manufactured classic roller coasters and an assortment of other rides for amusement parks all over the world.

The Switchback was 600 feet long and ran six miles per hour along West Tenth Street from Surf Avenue to the ocean. It was not a round-trip ride. The passengers left the car, which was then turned around and sent back to the start. The fare was a nickel. Thompson then developed a scenic coaster that traveled at a slow pace through tunnels illuminated only by headlights on the lead car. The ride was the first tunnel of love.

Thompson was born in Jersey, Ohio, in 1848. As a young man, he was a talented tinkerer who made his fortune by inventing a knitting machine that manufactured seamless hosiery. Although the business prospered, the stress destroyed his health and he sold his company. His interest shifted to amusements, and a decade after building the first roller coaster, he founded the L.A. Thompson Scenic Railway Company.

The company had its workshop and main office on West Eighth Street in Coney Island. Over the next ten years Thompson built other scenic railway roller coasters in Coney Island: next to Dreamland and at Brighton Beach Park, Luna Park, and Steeplechase Park. His biggest and finest ride, the company's flagship, was the Oriental Scenic Railway, located on Surf Avenue at West Eighth Street.

Thompson trained a whole generation of talented roller-coaster designers, including John Miller, who later designed Coney's Thunderbolt.In 1915, the "Father of Gravity" retired to Thompson Park, his sprawling estate in Glen Cove, Long Island, where he died in 1919 at the age of seventy-one. 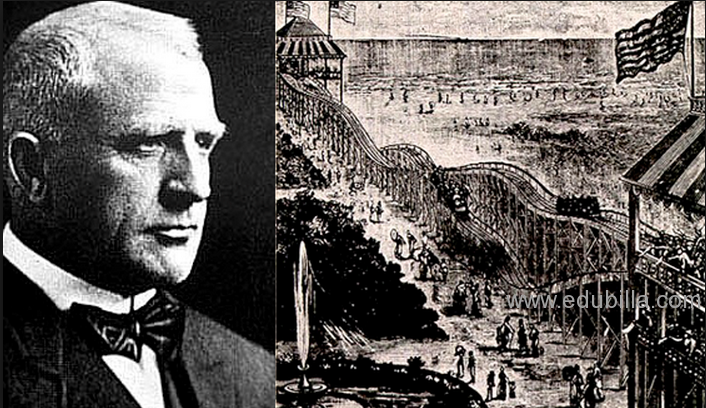