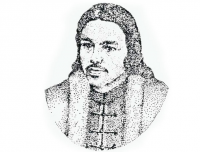 Jozef Karol Hell was a Hungarian mining engineer and inventor, who invented the water-pillar (water pump machine) in 1749 (first use 1753). It is mainly used today for oil extraction. He also proposed construction of the tajchy reservoirs around Banská Štiavnica. He was a student of Samuel Mikovíny in 1737. Regardless of his nationality, he is a pride of both Hungarian and Slovak nations.

His first machine was able to pump water up from the depth of 212 meters. Jozef Karol Hell later built the pumping machines in 1749-1768, which belongs to the best technology in this field worldwide.