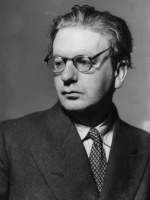 John Logie Baird was a Scottish engineer, innovator and inventor of the world's first mechanical television the first publicly demonstrated colour television system and the first purely electronic colour television picture tube. Baird's early technological successes and his role in the practical introduction of broadcast television for home entertainment have earned him a prominent place in television's history.

In 2002, Baird was ranked number 44 in the BBC's list of the "100 Greatest Britons" following a UK-wide vote.In 2006, Baird was named as one of the 10 greatest Scottish scientists in history, having been listed in the National Library of Scotland's 'Scottish Science Hall of Fame'.

Baird was born at 8am on 14 August 1888 in Helensburgh, Argyll and Bute (then Dunbartonshire), and was the youngest of four children of the Reverend John Baird, the Church of Scotland's minister for the local St Bride's church and Jessie Morrison Inglis, the orphaned niece of a wealthy family of shipbuilders from Glasgow.

He was educated at Larchfield Academy (now part of Lomond School) in Helensburgh; the Glasgow and West of Scotland Technical College (which later became the University of Strathclyde); and the University of Glasgow. His degree course was interrupted by World War I and he never returned to graduate.

In his first attempts to develop a working television system, Baird experimented with the Nipkow disk. Paul Gottlieb Nipkow had invented this scanning disc system in 1884.Television historian Albert Abramson calls Nipkow's patent "the master television patent".Nipkow's work is important because Baird and many others chose to develop it into a broadcast medium.

In early 1923, and in poor health, Baird moved to 21 Linton Crescent, Hastings, on the south coast of England and later rented a workshop in the Queen's Arcade in the town. Baird built what was to become the world's first working television set using items including an old hatbox and a pair of scissors, some darning needles, a few bicycle light lenses, a used tea chest, and sealing wax and glue that he purchased.In February 1924, he demonstrated to the Radio Times that a semi-mechanical analogue television system was possible by transmitting moving silhouette images. In July of the same year, he received a 1000-volt electric shock, but survived with only a burnt hand. His landlord, Mr Tree, asked him to quit his workshop and he moved to upstairs rooms in Soho, London, where he made a technical breakthrough. Baird gave the first public demonstration of moving silhouette images by television at Selfridges department store in London in a three-week series of demonstrations beginning on 25 March 1925.

In his laboratory on 2 October 1925, Baird successfully transmitted the first television picture with a greyscale image: the head of a ventriloquist's dummy nicknamed "Stooky Bill" in a 30-line vertically scanned image, at five pictures per second.Baird went downstairs and fetched an office worker, 20-year-old William Edward Taynton, to see what a human face would look like, and Taynton became the first person to be televised in a full tonal range.Looking for publicity, Baird visited the Daily Express newspaper to promote his invention. The news editor was terrified and he was quoted by one of his staff as saying: "For God's sake, go down to reception and get rid of a lunatic who's down there. He says he's got a machine for seeing by wireless! Watch him — he may have a razor on him."

On 26 January 1926, Baird repeated the transmission for members of the Royal Institution and a reporter from The Times in his laboratory at 22 Frith Street in the Soho district of London.By this time, he had improved the scan rate to 12.5 pictures per second. It was the first demonstration of a television system that could broadcast live moving images with tone graduation.

He demonstrated the world's first colour transmission on 3 July 1928, using scanning discs at the transmitting and receiving ends with three spirals of apertures, each spiral with a filter of a different primary colour; and three light sources at the receiving end, with a commutator to alternate their illumination.That same year he also demonstrated stereoscopic television.

In 1932, Baird was the first person in the United Kingdom to demonstrate ultra-short wave transmissions. (Today, we refer to "ultra short waves" as the VHF band.) Contrary to some reports, these transmissions were far from the first VHF telecasts. In 1931, the US Federal Radio Commission allocated VHF television bands. From 1931 to 1933, station W9XD in Milwaukee, Wisconsin, transmitted some of the first VHF television signals. The station's 45-line, triply interlaced pictures used the U. A. Sanabria television technology.

From December 1944 until his death two years later, Baird lived at a house in Station Road, Bexhill-on-Sea, East Sussex, immediately north of the station itself.Baird died in Bexhill on 14 June 1946 after a stroke in February.The old house was demolished in 2007.The Sea Road-Station Road skyline now features a new block of 51 flats on the site, renamed "Baird Court".

John Logie Baird is buried with his mother, father and wife in Helensburgh Cemetery.

Australian television's Logie Awards were named in honour of John Logie Baird's contribution to the invention of the television.

In 2014, SMPTE inducted John Logie Baird into The Honor Roll which "posthumously recognizes individuals who were not awarded Honorary Membership during their lifetimes but whose contributions would have been sufficient to warrant such an honor. 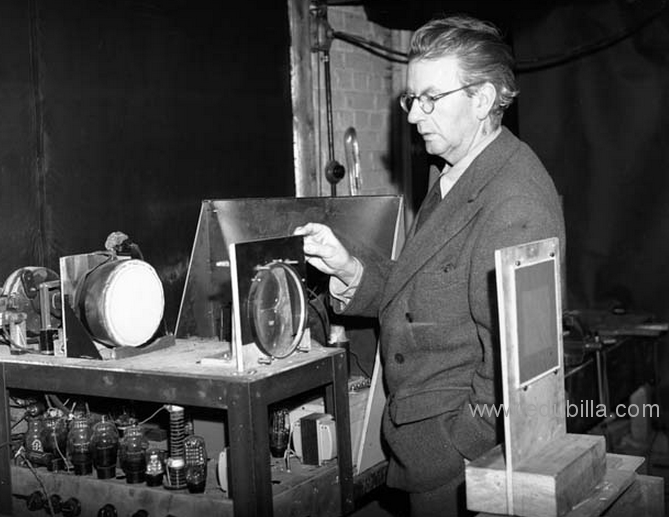 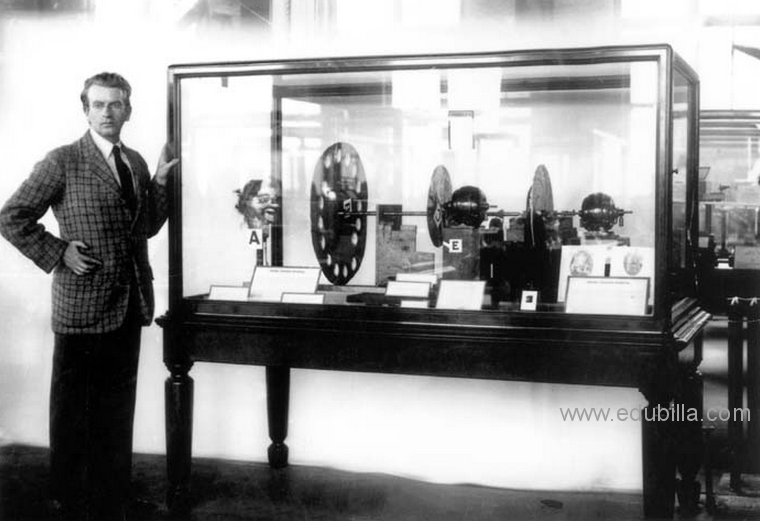