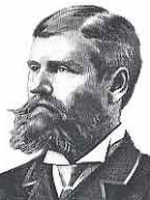 Henry S. Parmelee(c. 1846 – 1902), was president of the Fair Haven and Westville Street Railway Company and was a piano maker from New Haven, Connecticut. He invented the first automatic fire sprinkler system in 1874, to protect his piano factory.While other patents for fire sprinklers predated Parmelee's work, he is credited with the first automated sprinkler head. His piano company, Mathushek Piano Manufacturing, is credited as being the first building in the United States to be equipped with a fire suppression system.

The world’s first sprinkler system was installed in the Theatre Royal, Drury Lane in the United Kingdom in 1812.  The systems consisted of a cylindrical airtight reservoir of 400 hogsheads (95,000 liters) fed by a 10in (250mm) water main which branched to all parts of the theatre. A series of smaller pipes fed from the distribution pipe were pierced with a series of 1/2" (15mm) holes which poured water in the event of a fire.

From 1852 to 1885, perforated pipe systems were used in textile mills throughout New England as a means of fire protection. However, they were not automatic systems as they did not turn on by themselves. Inventors first began experimenting with automatic sprinklers around 1860.

Frederick Grinnell improved Parmalee's design and in 1881 patented the automatic sprinkler that bears his name. He continued to improve the device and in 1890 invented the glass disc sprinkler, essentially the same as that in use today.

Until the 1940s, sprinklers were installed almost exclusively for the protection of commercial buildings, whose owners were generally able to recoup their expenses with savings in insurance costs.

Over the years, fire sprinklers have become mandatory safety equipment North America, in certain occupancies, including, but not limited to newly constructed hospitals, schools, hotels and other public buildings, subject to the local building codes and enforcement. However, outside of the US and Canada, sprinklers are rarely mandated by building codes for normal hazard occupancies which do not have large numbers of occupants (e.g. factories, process lines, retail outlets, petrol stations etc).