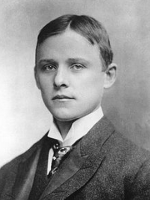 Charles Martin Hall was born in Thompson, Ohio, in 1863 the son of a minister. He attended Oberlin College in Oberlin, Ohio. There Hall studied chemistryand was influenced by one of his professors, F. F. Jewett, himself a former student of Friedrich Wohler (1800-1882) who had developed a process of purifying small quantities of aluminum in 1845. Wohler's extraction method was so difficult that aluminum was considered a semiprecious metal. A remark by Professor Jewett that whoever could develop an efficient method of producing aluminum would become rich was taken seriously by Hall. Even before his graduationin 1885, Hall was experimenting with the process.

Only one year later, Hall succeeded in extracting a sample of pure aluminum from cryolite using an electrolytic process, instead of the thermal process then in use. In a short time, Hall had succeeded where others had been stymiedfor 60 years. Hall spent the next two years seeking financial support for hisdiscovery. In 1889 he patented his extraction process. With the assistance of financier Andrew Mellon (1855-1937), Hall and a group of businessmen founded the Pittsburgh Reduction Company in 1888, which had its factory at Kensington, Pennsylvania.

In 1890 Hall became vice-president of the company, which was renamed AluminumCompany of America (Alcoa) in 1907. It produced commercially salable units of aluminum with the use of 2,000 ampere cells and required no external heating. The price of aluminum--once $100 per pound (453g)--was reduced to $0.70 per pound. By 1914 it was further reduced to $O.18 per pound.

In the same year that Hall had made his discovery (1886), Frenchman Paul-Louis-Toussaint Héroult developed the same process. Hall was able to get his process into commercial production faster than Heroult and won a patent dispute with Heroult in 1893. Despite this, Hall and Heroult became best friends. Hall remembered Oberlin College with a $3 million donation. Alcoa still preserves the original aluminum nodules that Hall produced in 1886.

Aluminum has become, along with steel, one of the two most important metals in the world. It is in demand for its strength, durability, and beauty. Aluminum is currently used in a variety of industries,, including construction, airplane production, wiring, cookware, and packaging. 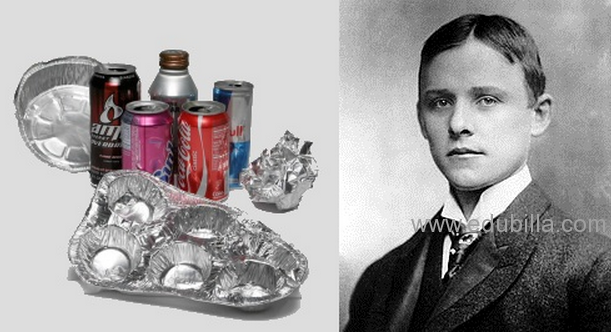