Robert Elliot "Bob" Kahn (born December 23, 1938) is an American electrical engineer, who, along with Vint Cerf, invented the Transmission Control Protocol (TCP) and the Internet Protocol (IP), the fundamental communication protocols at the heart of the Internet.

Kahn was born in Brooklyn to Jewish parents.Through his father, he is related to futurist Herman Kahn.After receiving a B.E.E. degree in electrical engineering from the City College of New York in 1960, Kahn earned M.A. and Ph.D. degrees from Princeton University in 1962 and 1964 respectively. After finishing graduate school, he worked for AT&T Bell Laboratories, and then became an assistant professor at MIT. He then worked at Bolt, Beranek and Newman (BBN), where he helped develop the IMP.

In 1972, he began work at the Information Processing Techniques Office (IPTO) within DARPA. In the fall of 1972, he demonstrated the ARPANET by connecting 20 different computers at the International Computer Communication Conference, "the watershed event that made people suddenly realize that packet switching was a real technology."He then helped develop the TCP/IP protocols for connecting diverse computer networks. After he became Director of IPTO, he started the United States government's billion dollar Strategic Computing Initiative, the largest computer research and development program ever undertaken by the U.S. federal government.

After thirteen years with DARPA, he left to found the Corporation for National Research Initiatives (CNRI) in 1986, and as of 2009 is the Chairman, CEO and President.

In May, 1974, the Institute of Electrical and Electronic Engineers (IEEE) published a paper titled "A Protocol for Packet Network Interconnection." The paper's authors Vinton Cerf and Robert Kahn described a protocol called "TCP" that incorporated both connection-oriented and datagram services.

... . It soon became apparent to the two men that this design should be subdivided into two separate protocols. Session management was not easy to do in an application-independent way. In practice, an application could sometimes run more efficiently or be implemented more easily when it managed network connections itself. "TCP" became Internet Protocol (IP) that supported datagrams and Transmission Control Protocol (TCP/IP) that added connection semantics as a layer on top of IP.

While working on a satellite packet network project, he came up with the initial ideas for what later became the Transmission Control Protocol (TCP), which was intended as a replacement for an earlier network protocol, NCP, used in the ARPANET. While working on this, he played a major role in forming the basis of open-architecture networking, which would allow computers and networks all over the world to communicate with each other, regardless of what hardware or software the computers on each network used. To reach this goal, TCP was designed to have the following features:

Each piece of information sent through the network would be accompanied by a checksum, calculated by the original sender, and checked by the ultimate receiver, to ensure that it was not damaged in any way en route.Vint Cerf joined him on the project in the spring of 1973, and together they completed an early version of TCP. Later, it was separated into two separate layers, with the more basic functions[vague] being moved to the Internet Protocol (IP). The two together are usually referred to as TCP/IP, and form part of the basis for the modern Internet.In 1992 he co-founded with Vint Cerf the Internet Society, to provide leadership in Internet related standards, education, and policy.

National Medal of Technology and Innovation (1997) 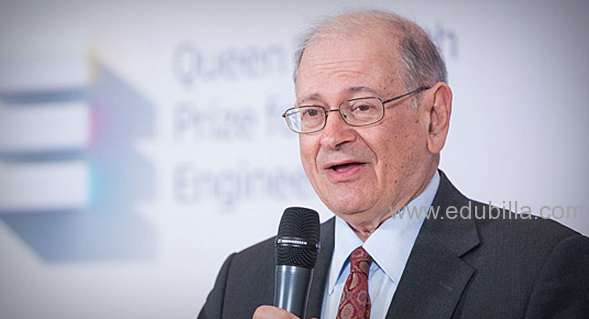 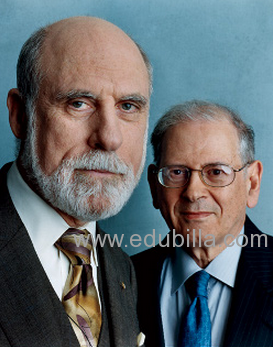