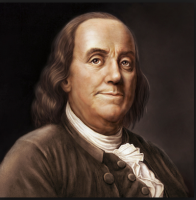 Benjamin Franklin was born on Milk Street, in Boston, Massachusetts, on January 17, 1706,and baptized at Old South Meeting House. He was one of ten children born to Josiah Franklin with his second wife Abiah Folger. Among Benjamin's siblings were his older brother James and his younger sister Jane.

Josiah wanted Ben to attend school with the clergy, but only had enough money to send him to school for two years. He attended Boston Latin School but did not graduate; he continued his education through voracious reading. Although "his parents talked of the church as a career" for Franklin, his schooling ended when he was ten. He worked for his father for a time, and at 12 he became an apprentice to his brother James, a printer, who taught Ben the printing trade. When Ben was 15, James founded The New-England Courant, which was the first truly independent newspaper in the colonies.

When denied the chance to write a letter to the paper for publication, Franklin adopted the pseudonym of "Mrs. Silence Dogood", a middle-aged widow. "Mrs. Dogood"'s letters were published, and became a subject of conversation around town. Neither James nor the Courant's readers were aware of the ruse, and James was unhappy with Ben when he discovered the popular correspondent was his younger brother. Franklin was an advocate of free speech from an early age. When his brother was jailed for three weeks in 1722 for publishing material unflattering to the governor, young Franklin took over the newspaper and had Mrs Dogood (quoting Cato's Letters) proclaim: "Without freedom of thought there can be no such thing as wisdom and no such thing as public liberty without freedom of speech."Franklin left his apprenticeship without his brother's permission, and in so doing became a fugitive.

At age 17, Franklin ran away to Philadelphia, Pennsylvania, seeking a new start in a new city. When he first arrived, he worked in several printer shops around town, but he was not satisfied by the immediate prospects. After a few months, while working in a printing house, Franklin was convinced by Pennsylvania Governor Sir William Keith to go to London, ostensibly to acquire the equipment necessary for establishing another newspaper in Philadelphia. Finding Keith's promises of backing a newspaper empty, Franklin worked as a typesetter in a printer's shop in what is now the Church of St Bartholomew-the-Great in the Smithfield area of London. Following this, he returned to Philadelphia in 1726 with the help of Thomas Denham, a merchant who employed Franklin as clerk, shopkeeper, and bookkeeper in his business.

Franklin, always proud of his working class roots, became a successful newspaper editor and printer in Philadelphia, the leading city in the colonies.With two partners he published the Pennsylvania Chronicle, a newspaper that was known for its revolutionary sentiments and criticisms of the British policies. He became wealthy publishing Poor Richard's Almanack and The Pennsylvania Gazette. Franklin was also the printer of books for the Moravians of Bethlehem, Pennsylvania (1742 on). Franklin's printed Moravian books (printed in German) are preserved, and can be viewed, at the Moravian Archives located in Bethlehem. Franklin visited Bethlehem many times and stayed at the Moravian Sun Inn.

He played a major role in establishing the University of Pennsylvania and was elected the first president of the American Philosophical Society. Franklin became a national hero in America when as agent for several colonies he spearheaded the effort to have Parliament in London repeal the unpopular Stamp Act. An accomplished diplomat, he was widely admired among the French as American minister to Paris and was a major figure in the development of positive Franco-American relations. His efforts to secure support for the American Revolution by shipments of crucial munitions proved vital for the American war effort.

For many years he was the British postmaster for the colonies, which enabled him to set up the first national communications network. He was active in community affairs, colonial and state politics, as well as national and international affairs. From 1785 to 1788, he served as governor of Pennsylvania. Toward the end of his life, he freed his own slaves and became one of the most prominent abolitionists.

His colorful life and legacy of scientific and political achievement, and status as one of America's most influential Founding Fathers, have seen Franklin honored on coinage and the $100 bill; warships; the names of many towns; counties; educational institutions; corporations; and, more than two centuries after his death, countless cultural references.

Franklin was a member of the learned societies of many nations. Among these were the Royal Society, which awarded him its prestigious Copley medal for his work in electricity (1753); and the American Philosophical Society, of which he was a founder. He received several honorary degrees, including a doctorate from St. Andrews. 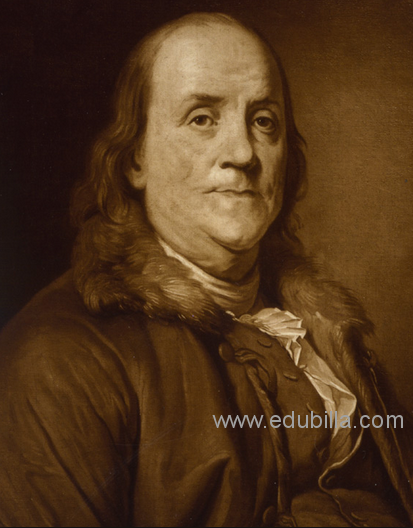