The Birth of the ARPANET

Scientists and military experts were especially concerned about what might happen in the event of a Soviet attack on the nation’s telephone system. Just one missile, they feared, could destroy the whole network of lines and wires that made efficient long-distance communication possible. In 1962, a scientist from M.I.T. and ARPA named J.C.R. Licklider proposed a solution to this problem: a “galactic network” of computers that could talk to one another. Such a network would enable government leaders to communicate even if the Soviets destroyed the telephone system.

In 1965, another M.I.T. scientist developed a way of sending information from one computer to another that he called “packet switching.” Packet switching breaks data down into blocks, or packets, before sending it to its destination. That way, each packet can take its own route from place to place. Without packet switching, the government’s computer network—now known as the ARPAnet—would have been just as vulnerable to enemy attacks as the phone system.

In 1969, ARPAnet delivered its first message: a “node-to-node” communication from one computer to another. (The first computer was located in a research lab at UCLA and the second was at Stanford; each one was the size of a small house.) The message—“LOGIN”—was short and simple, but it crashed the fledgling ARPA network anyway: The Stanford computer only received the note’s first two letters.

"The Internet may fairly be regarded as a never-ending worldwide conversation." - supreme judge statement on considering first amendment rights for Internet users.

On a cold war kind of day, in swinging 1969, work began on the ARPAnet, grandfather to the Internet. Designed as a computer version of the nuclear bomb shelter, ARPAnet protected the flow of information between military installations by creating a network of geographically separated computers that could exchange information via a newly developed protocol (rule for how computers interact) called NCP (Network Control Protocol).

One opposing view to ARPAnet's origins comes from Charles M. Herzfeld, the former director of ARPA. He claimed that ARPAnet was not created as a result of a military need, stating "it came out of our frustration that there were only a limited number of large, powerful research computers in the country and that many research investigators who should have access were geographically separated from them." ARPA stands for the Advanced Research Projects Agency, a branch of the military that developed top secret systems and weapons during the Cold War.

The first data exchange over this new network occurred between computers at UCLA and Stanford Research Institute. On their first attempt to log into Stanford's computer by typing "log win", UCLA researchers crashed their computer when they typed the letter 'g'.

Four computers were the first connected in the original ARPAnet. They were located in the respective computer research labs of UCLA (Honeywell DDP 516 computer), Stanford Research Institute (SDS-940 computer), UC Santa Barbara (IBM 360/75), and the University of Utah (DEC PDP-10). As the network expanded, different models of computers were connected, creating compatibility problems. The solution rested in a better set of protocols called TCP/IP (Transmission Control Protocol/Internet Protocol) designed in 1982.

To send a message on the network, a computer breaks its data into IP (Internet Protocol) packets, like individually addressed digital envelopes. TCP (Transmission Control Protocol) makes sure the packets are delivered from client to server and reassembled in the right order.

Under ARPAnet several major innovations occurred: email (or electronic mail), the ability to send simple messages to another person across the network (1971); telnet, a remote connection service for controlling a computer (1972); and file transfer protocol (FTP), which allows information to be sent from one computer to another in bulk (1973).

As non-military uses for the network increased, more and more people had access, and it was no longer safe for military purposes. As a result, MILnet, a military only network, was started in 1983. Internet Protocol software was soon being placed on every type of computer, and universities and research groups also began using in-house networks known as Local Area Networks or LAN's. These in-house networks then started using Internet Protocol software so one LAN could connect with other LAN's.

In 1986, one LAN branched out to form a new competing network, called NSFnet (National Science Foundation Network). NSFnet first linked together the five national supercomputer centers, then every major university, and it started to replace the slower ARPAnet (which was finally shutdown in 1990). NSFnet formed the backbone of what we call the Internet today.

"The Internet's pace of adoption eclipses all other technologies that preceded it. Radio was in existence 38 years before 50 million people tuned in; TV took 13 years to reach that benchmark. Sixteen years after the first PC kit came out, 50 million people were using one. Once it was opened to the general public, the Internet crossed that line in four years." - quote from the U.S. Department report "The Emerging Digital Economy". 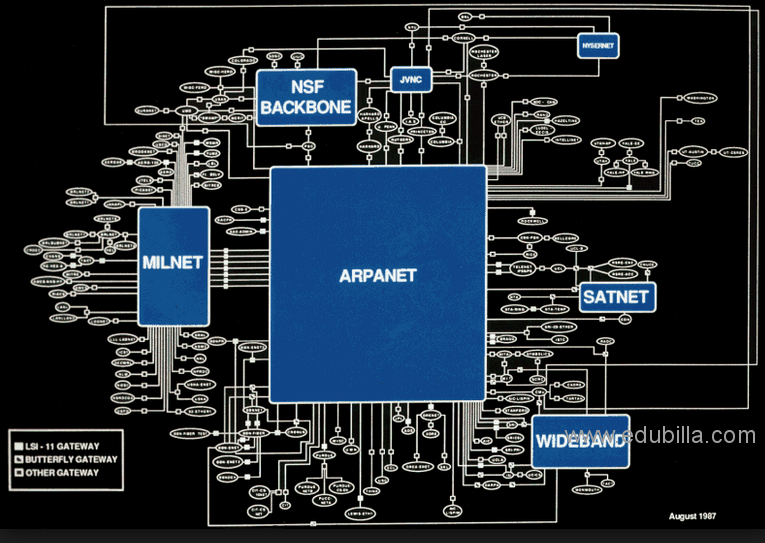 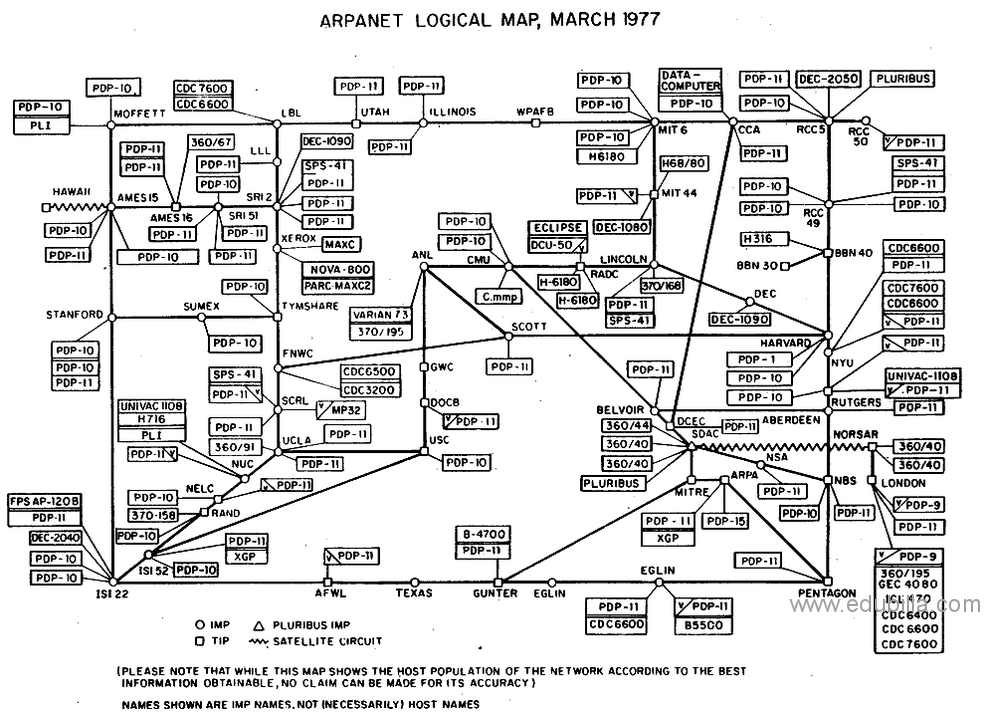