The thrashing machine, or, in modern spelling, threshing machine (or simply thresher), was first invented by Scottish mechanical engineer Andrew Meikle for use in agriculture. It was devised (c.1786) for the separation of grain from stalks and husks. For thousands of years, grain was separated by hand with flails, and was very laborious and time consuming, taking about one-quarter of agricultural labor by the 18th century.Mechanization of this process took much of the drudgery out of farm labour.

The riots were dealt with very harshly. Nine of the rioters were hanged and a further 450 were transported to Australia.

Early threshing machines were hand-fed and horse-powered. They were small by today's standards and were about the size of an upright piano. Later machines were steam-powered, driven by a portable engine or traction engine. In 1834, John Avery and Hiram Abial Pitts devised significant improvements to a machine that automatically threshes and separates grain from chaff, freeing farmers from a slow and laborious process. Avery and Pitts were granted United States patent #542 on December 29, 1837.

""Since the invention of this machine, Mr. Meikle and others have progressively introduced a variety of improvements, all tending to simplify the labour, and to augment the quantity of the work performed. When first erected, though the grain was equally well separated from the straw, yet as the whole of the straw, chaff, and grain, was indiscriminately thrown into a confused heap, the work could only with propriety be considered as half executed. By the addition of rakes, or shakers, and two pairs of fanners, all driven by the same machinery, the different processes of thrashing, shaking, and winnowing are now all at once performed, and the grain immediately prepared for the public market. When it is added, that the quantity of grain gained from the superior powers of the machine is fully equal to a twentieth part of the crop, and that, in some cases, the expense of thrashing and cleaning the grain is considerably less than what was formerly paid for cleaning it alone, the immense saving arising from the invention will at once be seen.

""The expense of horse labour, from the increased value of the animal and the charge of his keeping, being an object of great importance, it is recommended that, upon all sizable farms, that is to say, where two hundred acres [800,000 m²], or upwards, of grain are sown, the machine should be worked by wind, unless where local circumstances afford the conveniency of water. Where coals are plenty and cheap, steam may be advantageously used for working the machine.""

Steam-powered machines used belts connected to a traction engine; often both engine and thresher belonged to a contractor who toured the farms of a district. Steam remained a viable commercial option until the early post-WWII years. 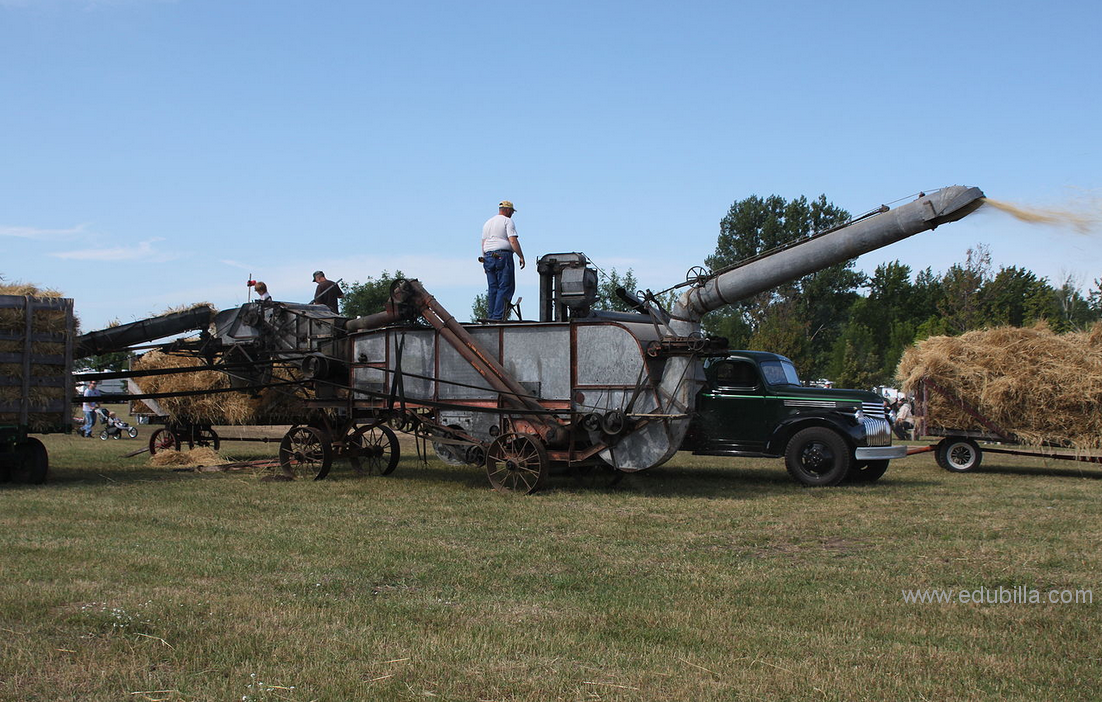 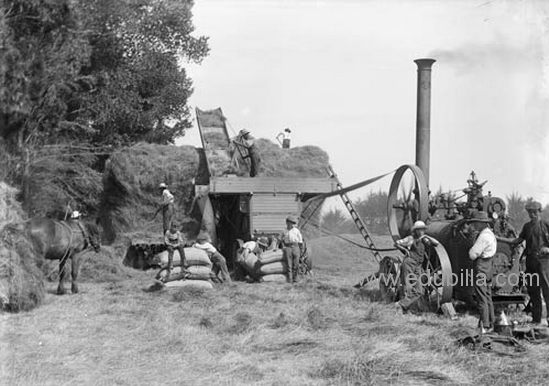 Other inventions in Agricultural