The mercury-in-glass or mercury thermometer was invented by physicist Daniel Gabriel Fahrenheit in Amsterdam (1714). It consists of a bulb containing mercury attached to a glass tube of narrow diameter; the volume of mercury in the tube is much less than the volume in the bulb. The volume of mercury changes slightly with temperature; the small change in volume drives the narrow mercury column a relatively long way up the tube. The space above the mercury may be filled with nitrogen or it may be at less than atmospheric pressure, a pencilvacuum.

In order to calibrate the thermometer, the bulb is made to reach thermal equilibrium with a temperature standard such as an ice/water mixture, and then with another standard such as water/vapour, and the tube is divided into regular intervals between the fixed points. In principle, thermometers made of different material (e.g., coloured alcohol thermometers) might be expected to give different intermediate readings due to different expansion properties; in practice the substances used are chosen to have reasonably linear expansion characteristics as a function of true thermodynamic temperature, and so give similar results.

The thermometer was used by the originators of the Fahrenheit and Celsius scales.

Anders Celsius, a Swedish scientist, devised the Celsius scale, which was described in his publication the origin of the Celsius temperature scale in 1742.

Celsius used two fixed points in his scale: the temperature of melting ice and the temperature of boiling water. This wasn't a new idea, since Isaac Newton was already working on something similar. The distinction of Celsius was to use the condition of melting and not that of freezing. The experiments for reaching a good calibration of his thermometer lasted for 2 winters. By performing the same experiment over and over again, he discovered that ice always melted at the same calibration mark on the thermometer. He found a similar fixed point in the calibration of boiling water to water vapour (when this is done to high precision, a variation will be seen with atmospheric pressure; Celsius noted this). At the moment that he removed the thermometer from the vapour, the mercury level climbed slightly. This was related to the rapid cooling (and contraction) of the glass.

Finally, Celsius proposed a method of calibrating a thermometer:

Place the cylinder of the thermometer in melting ice made of pure water and mark the point where the fluid in the thermometer stabilises. This point is the freeze/thaw point of water.

In the same manner mark the point where the fluid stabilises when the thermometer is placed in boiling water vapour.

Divide the length between the two marks into 100 equal parts.

These points are adequate for approximate calibration but both vary with atmospheric pressure. Nowadays, the triple point of water is used instead of the freezing point (the triple point occurs at 273.16 kelvins (K), 0.01 °C). 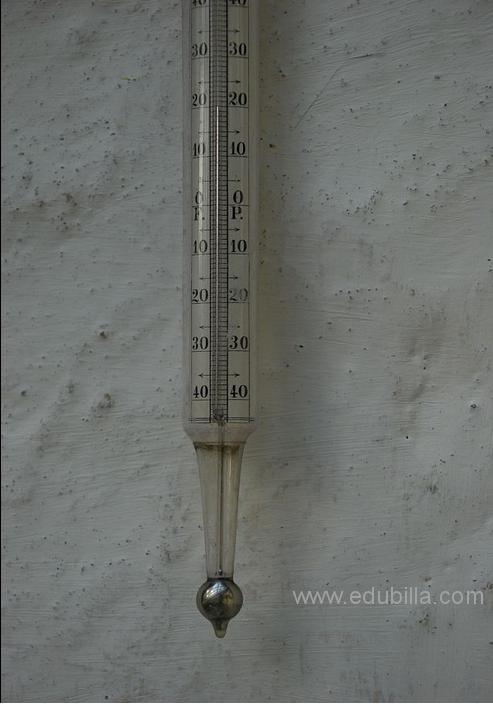 Other inventions in Physics