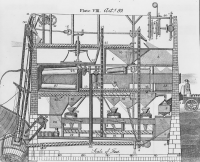 The First Automated Flour Mill (Circa 1785) about 1785 American inventor Oliver Evans Offsite Link built the first automated flour mill on Red-Clay CreekOffsite Link near Newport, Delaware. Driven by water power, the mill operated continuously through the use of five bulk material handlingOffsite Link devices including a hopper-boyOffsite Link, bucket elevatorsOffsite Link, conveyor beltsOffsite Link, Archimedean screwsOffsite Link, and descenders, reducing the number of men needed to operate the equipment from four to one.

Evans described this invention in The Young Mill-Wright and Millers' Guide which he published in Philadelphia in 1795. This work became very popular, undergoing numerous editions and revisions over the next fifty or more years. Evans patented this invention in a few states and, when the US patent system was established, in the federal patent system (Third U.S. Patent).

Evans's attention turned to milling in the early 1780s. Two of his elder brothers purchased from their father part of the Newport farm estate and intended to start a mill there – Evans was recruited in 1783 to oversee its construction on the Red Clay Creek. In this era, the operation of grist mills was labor-intensive. Although the stages of the milling process – grinding, cooling, sifting and packing – were beginning to be mechanized to various degrees, gravity or manual labor was required to move grain from one stage to the next. Additionally, some stages (particularly cooling) were slow and inefficient, creating significant production process bottlenecks.Mills were becoming commonplace in populated areas and those with ready access to streams for power, but the bulk of milling in the 1780s was done in the home through hand milling. Furthermore, the quality of milled wheat was poor in colonial America. Cross-contamination was a major problem: mill processes were not well-partitioned; the many people moving about the mill contaminated the flour with dirt, grain and other impurities.In addition, hard wheat varieties were insufficiently ground and sifted by mills, leaving a flour that was coarse and brown.The end result, Evans recognized, was a low quality product that took too many laborers to make.

After developing some preliminary designs, over the next half-decade Evans began to experiment in Newport with inventions to reduce the reliance upon labor for milling. Moving wheat from the bottom to the top of the mill to begin the process was the most onerous task of all in contemporary mills. Evans's first innovation was a bucket elevator to facilitate this process. The use of chains of buckets to raise water was a Roman technology and used in various guises since antiquity. Evans had seen diagrams of their use for marine applications and realized with some modification and careful engineering they could be used to raise grain, so a series of bucket elevators around a mill could move grain and flour from one process to the next.Another labor-intensive task was that of spreading meal. This came out of the grinding process warm and moist, needing cooling before it could be sifted and packed. Traditionally the task was done by manually shoveling meal across large floors. In response, Evans developed the ""hopper boy"", a device which gathered meal from a bucket elevator and spread it evenly over the drying floor—a mechanical rake would revolve around the floorspace. This would even out newly deposited meal for cooling and drying, whilst a gentle incline in the design of the rake blades would cause the rake rotations to slowly move flour towards central chutes, which would take the flour down to be sifted.Used in conjunction, the two innovations removed manual intervention and meant the elimination of most entry points for flour contamination. 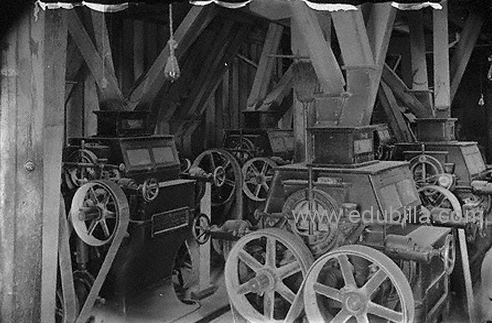 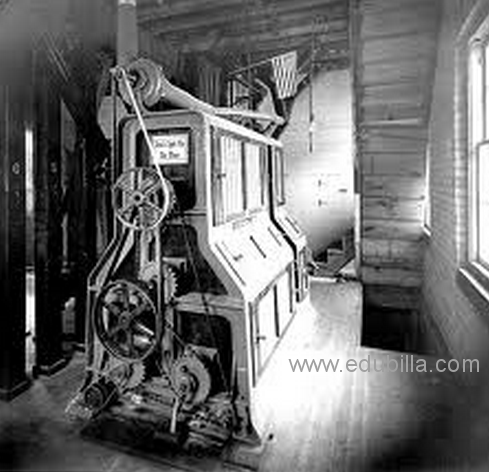 Other inventions in Power & Hand Tools