Gobindgarh Public School was established in 1977 by Gobindgarh Educational and Social Welfare Trust which was registered on September 29, 1978 under Societies Registration Act 1860. The Trust purchased nearly 13000 square yards of land in 1979 and built the Primary Block of the school on it in 1981 and classes were shifted in its own building in 1982. Now it is spread over an area of nearly 35000 square yards. The campus has extensive lush green lawns, flower beds and lots of greenery.

It is affiliated to C.B.S.E., New Delhi for Secondary and Senior Secondary classes wide affiliation No. 1630063. It provides quality education to the students from Mandi Gobindgarh and surrounding towns of Khanna, Amloh, Sirhind, Fatehgarh Sahib, Bassi Pathana and nearby villages. The school lives up to its motto 'LUX MUNDI' meaning 'Light of the World' and aims to provide a well balanced education whereby each child is provided an opportunity to develop his/her talent and excel in life, using his/her strengths. We believe that education is an enjoyable interactive on-going process. Our objective is to inculcate a positive attitude, to imbibe social and moral values and to encourage originality. Our goal is to bring up children who raise questions from independent hypothesis and develop an inquisitive mind. 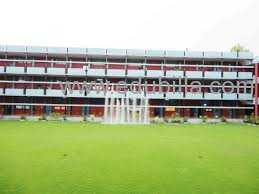