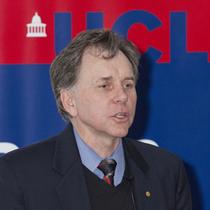 Barry James Marshall (born 30 September 1951) is an Australian physician, Nobel Prize laureate in Physiology or Medicine (the only laureate born in Western Australia), and Professor of Clinical Microbiology at the University of Western Australia. Marshall and Robin Warren showed that the bacterium Helicobacter pylori (H. pylori) is the cause of most peptic ulcers, reversing decades of medical doctrine holding that ulcers were caused by stress, spicy foods, and too much acid. This discovery has allowed for a breakthrough in understanding a causative link between Helicobacter pylori infection and stomach cancer.He received UCL Prize Lecture in Clinical Science in 2010.